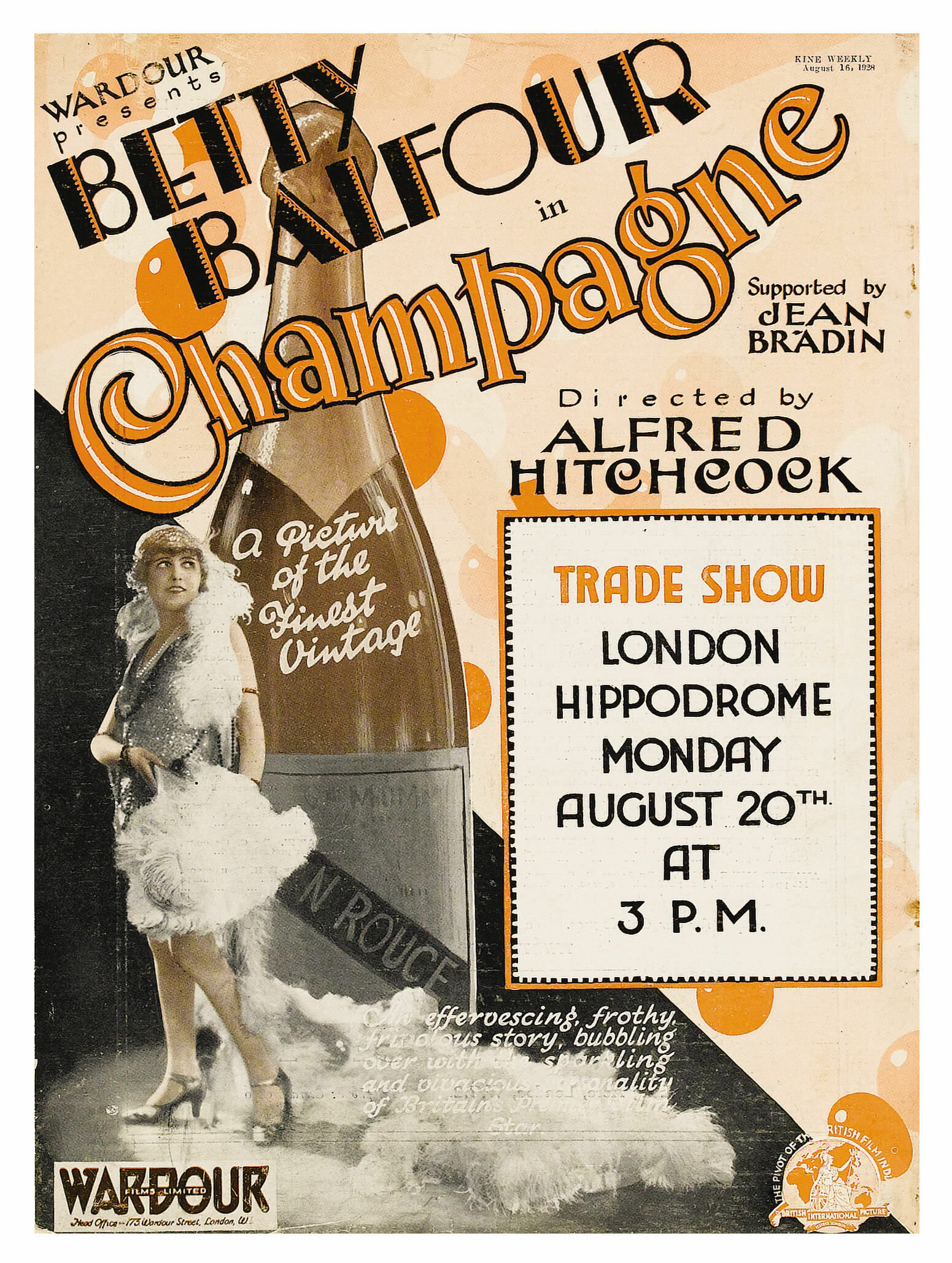 Disapproving of her love affair, a millionaire (Gordon Harker) sets out to teach his irresponsible daughter (Betty Balfour) a lesson by pretending to lose all his money in Champagne, another of the films Hitchcock made for British International Pictures. The film is perhaps most noteworthy for its experimental flourishes, including a series of shots through a raised Champagne glass. It also contains a disturbing, and what would become characteristically Hitchcockian, assault on a young woman, which turns out to be a fantasy – UK Optimum DVD 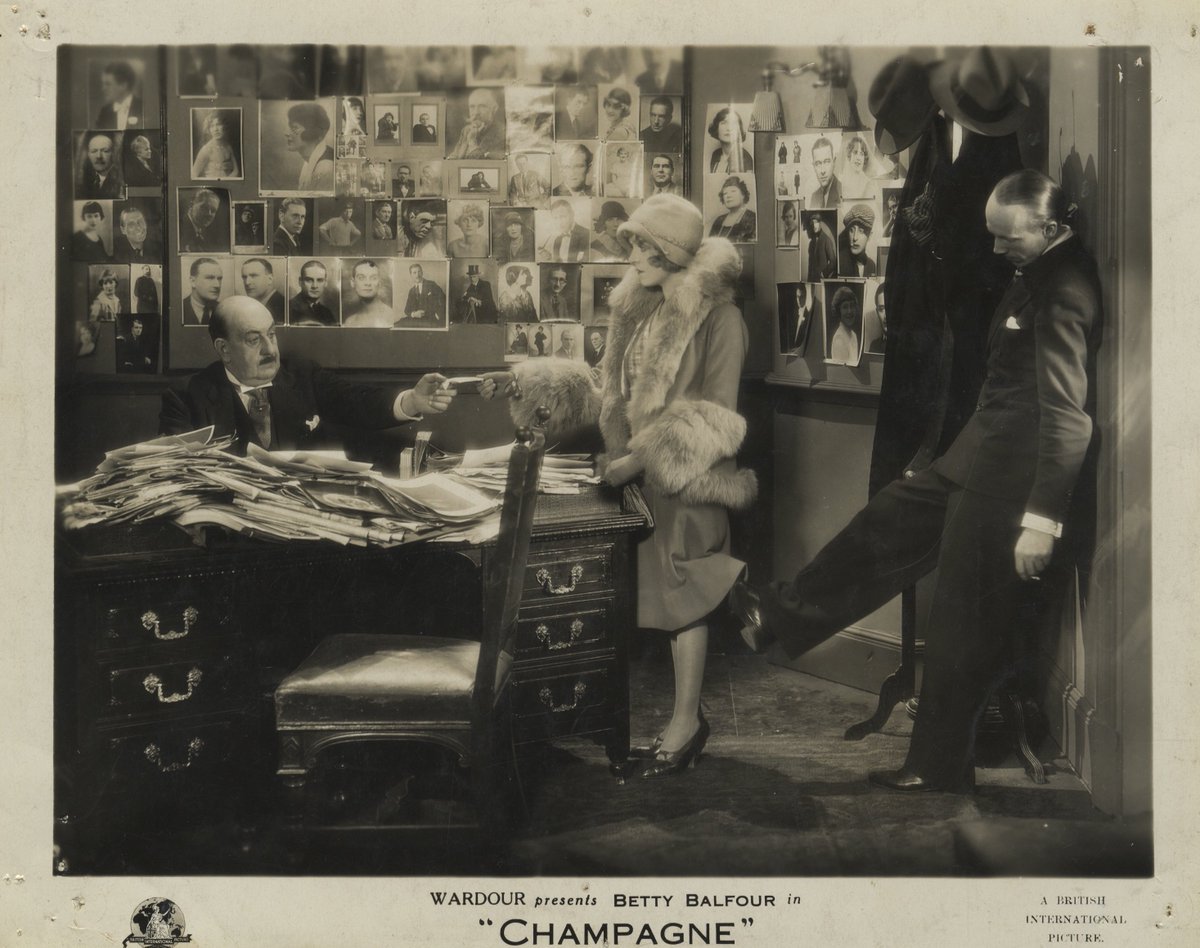 You cheeky bugger… Betty gets her skirt lifted in an early #MeToo moment.

Champagne is often not rated very highly, but it’s actually better than its reputation allows and let’s face it, how could it fail completely when it leans so heavily on the irrepressible talents of bubbly Betty Balfour (1903–1977), our biggest homegrown star of the 1920s? Admittedly though, its plot is paper thin and even if it was shortened by a couple of reels could still be conveyed with room to spare.

Little wonder Champagne is so slight, when the meaty original scenario it’s based on, by Walter C. Mycroft, was thoroughly bowdlerised at the behest of the studio. For once, Hitch wasn’t displaying false modesty when he told François Truffaut “There is no story!” In the original version, the main character is a Champagne factory worker who sees all the bottles being packed up and sent off to Paris, and daydreams about their glamorous destination. One day, she decides to see for herself, so she quits her job and heads for the bright lights of the capital. Initially, she has a high old time, spent in a heady whirl of parties and fancy nightclubs, but it’s shallow and unsustainable, and eventually she falls into a life of poverty and prostitution. Once at rock bottom, she manages to escape and returns to her former home and job. In the end she’s back where she started, but now when she sees the crates of Champagne being sent off, she imagines all the innocent lives they’re going to ruin.

A story ripe with melodrama then, and one that obviously appealed greatly to the young director. We can only wonder at what marvel he would have fashioned from such clay, but it was not to be. Hitch’s studio, British International Pictures, were only too aware that all his films to date had been angsty dramas. They’d also noted that even when their dramatic elements hadn’t gone over particularly well, audiences still responded favourably to the films’ humorous touches. It also didn’t help that the original story bore more than a passing resemblance to Hitch’s previous Downhill. Therefore, the studio mandated that Hitch’s next film be an outright comedy, which was fair enough, but unfortunately he and his co-writer, Eliot Stannard, still based it on Walter Mycroft’s dark tale. The poor factory worker was transformed into a spoiled heiress, who scandalises her father by flying off in his private aeroplane to join her lover on a cruise liner in the mid-Atlantic. Bang goes all the original story’s inherent dramatic tension. What little of it remains revolves around the fact that Betty’s father later fools her into thinking his wealth has been wiped out, forcing her to drop her lover and wanton ways. From there it’s simply a predictable trudge towards the inevitable happy conclusion.

The script’s shortcomings were exacerbated by the fact that much of it was written on the fly, with Hitch and Stannard often racing to polish up scenes immediately prior to each day’s shooting. The gorgeous original pressbook is, like the film itself, a thing of style and beauty rather than substance. Nonetheless, it strives to impart a sense of abundant fun, romance and drama that is, unfortunately, not always to be had.

Champagne was the third Hitchcock in a row for character actor Gordon Harker, on his way to a fourth in Elstree Calling. Here he plays Betty’s millionaire father, a huge promotion after his previous lowly, subservient roles in The Ring and The Farmer’s Wife. Betty went on to also star in Hungarian director Geza von Bolvary’s Champagner (1929), an Austro-British quasi-remake often confused with the original. Champagner was retitled Bright Eyes in English-speaking territories and Palace de luxe in French ones. 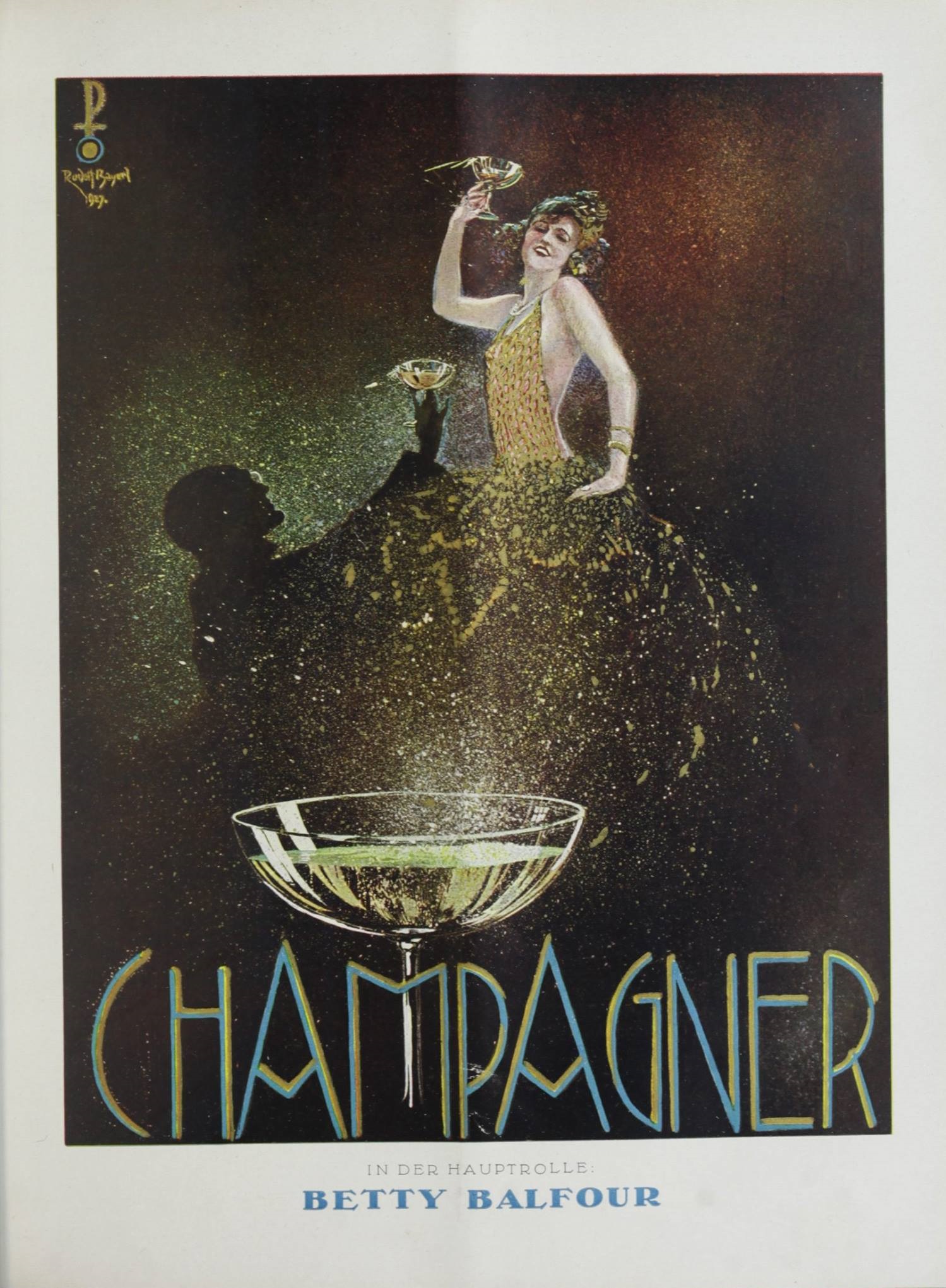 Ultimately, Champagne is well worth a sup, though perhaps only once you’ve worked your way through the bulk of Hitchcock’s other, more substantial British films. At the time of the original release, at least two separate negatives were prepared. The first consisted of the best takes and the second of alternate takes, for foreign distribution or simply as a back-up. Unfortunately, the “A” negative is now lost, so all existing prints – including the restoration – derive from the B neg. If you know of any copy with alternate takes, get in touch! The latest BFI restoration (20fps, 105min), part of the Hitchcock 9 project, premièred on 27 September 2012 at the BFI Southbank, London. It was accompanied with a fascinating, eclectic new score by Mira Calix which has only been performed live and not studio-recorded as yet (première vid); the current DCP is silent. In 2010, she composed a new score for Lotte Reiniger’s The Adventures of Prince Achmed (1926), also sadly unavailable. 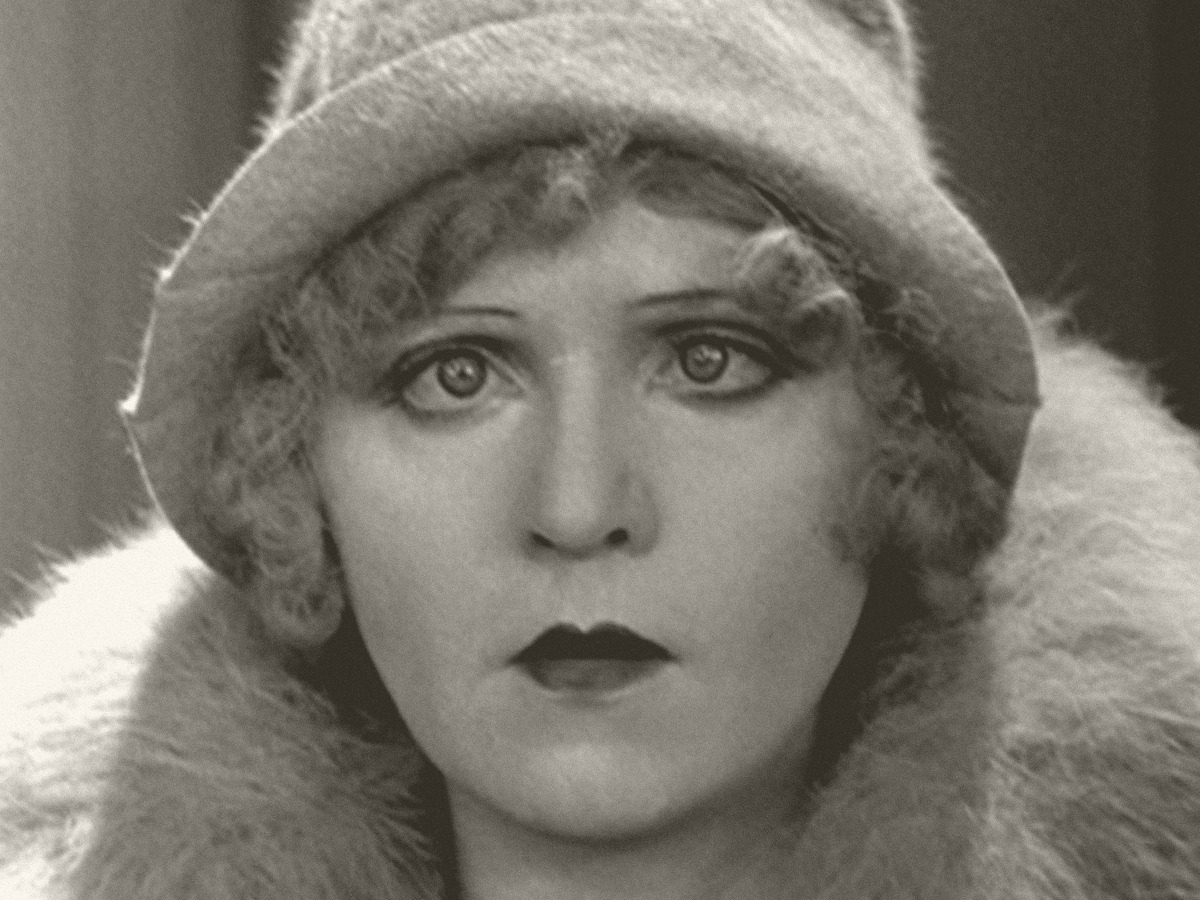 Gorgeous. The eyes have IT.

“The restoration team were able to work from an original negative on the restoration of Champagne, which meant they were able to get very good image quality. But this, it turned out, was something of a mixed blessing. From the beginning of the restoration process it was apparent that, for a Hitchcock film, there were some clumsily juxtaposed shots and framing errors, while a few shots showed substandard acting. Closer examination revealed an instruction scratched into a leader saying “2nd neg”. From this we deduced that this negative was assembled from second-best shots, retained as a back-up in case of damage to the original or for making additional prints for export. As this negative is the only original element in existence, it now looks as if we will never know exactly what the film looked like as it was originally released.

A great deal of work went into the preparation of the film before it could be scanned: the negative had been stored in sections joined loosely with tape. Some minor continuity errors were dealt with and some dissolves, which had been left ‘unmade’ in the negative, were tidied up before the film underwent grading and digital restoration processes. As with most of the other Hitchcock restorations, the titles were completely remade recreating exactly the original fonts and illustrations. The edit may be slightly compromised due to the source material that has come down to us but the result is a truly beautiful looking print doing full justice to Betty Balfour’s sparkling frocks.” (Restoration team: Kieron Webb, Bryony Dixon, Claire West, Ben Thompson, Dave Gurney, Peter Marshall) – BFI programme notes | clip 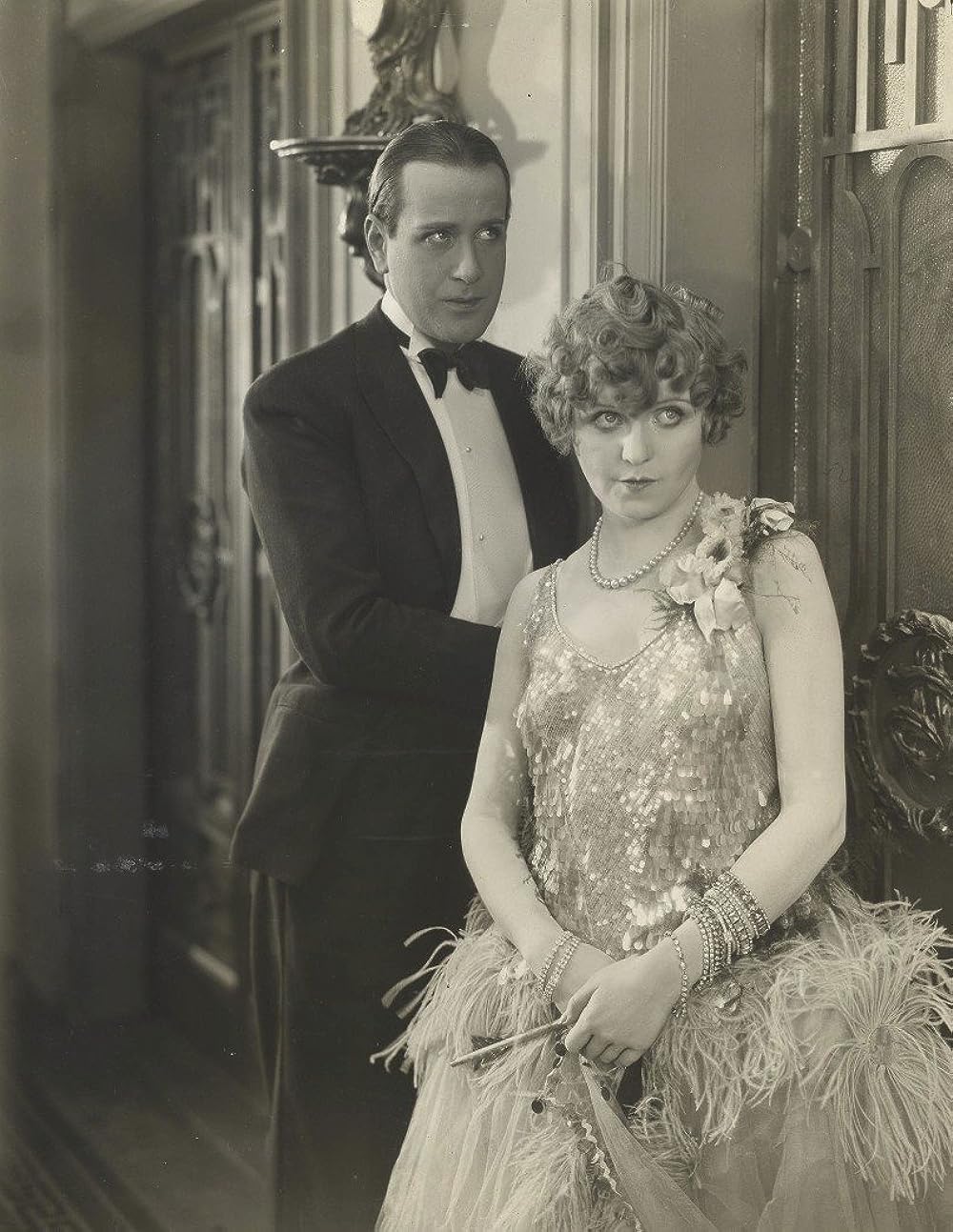 Jean Bradin and our Betty, in a sparkling frock

The restoration has only been released in the US thus far, alongside a new score by Ben Model and audio commentary by critic Farran Smith Nehme. But note it’s been stripped and ripped in lower quality for an anonymous Spanish BD-R bootleg, likely from Resen. However, the previously preserved version is widely available and certainly no slouch on the A/V front. It’s transferred at 24fps (90min; 86min w/4% PAL speed-up) and all releases feature an exceptionally lovely Xavier Berthelot piano score.

Like all of Hitch’s other copyrighted British films, Champagne has been widely bootlegged. There are some real shockers around, so if it isn’t on this list, don’t buy it.

Australian daybill poster; a free glass of Champers if you spot the spelling mistake… 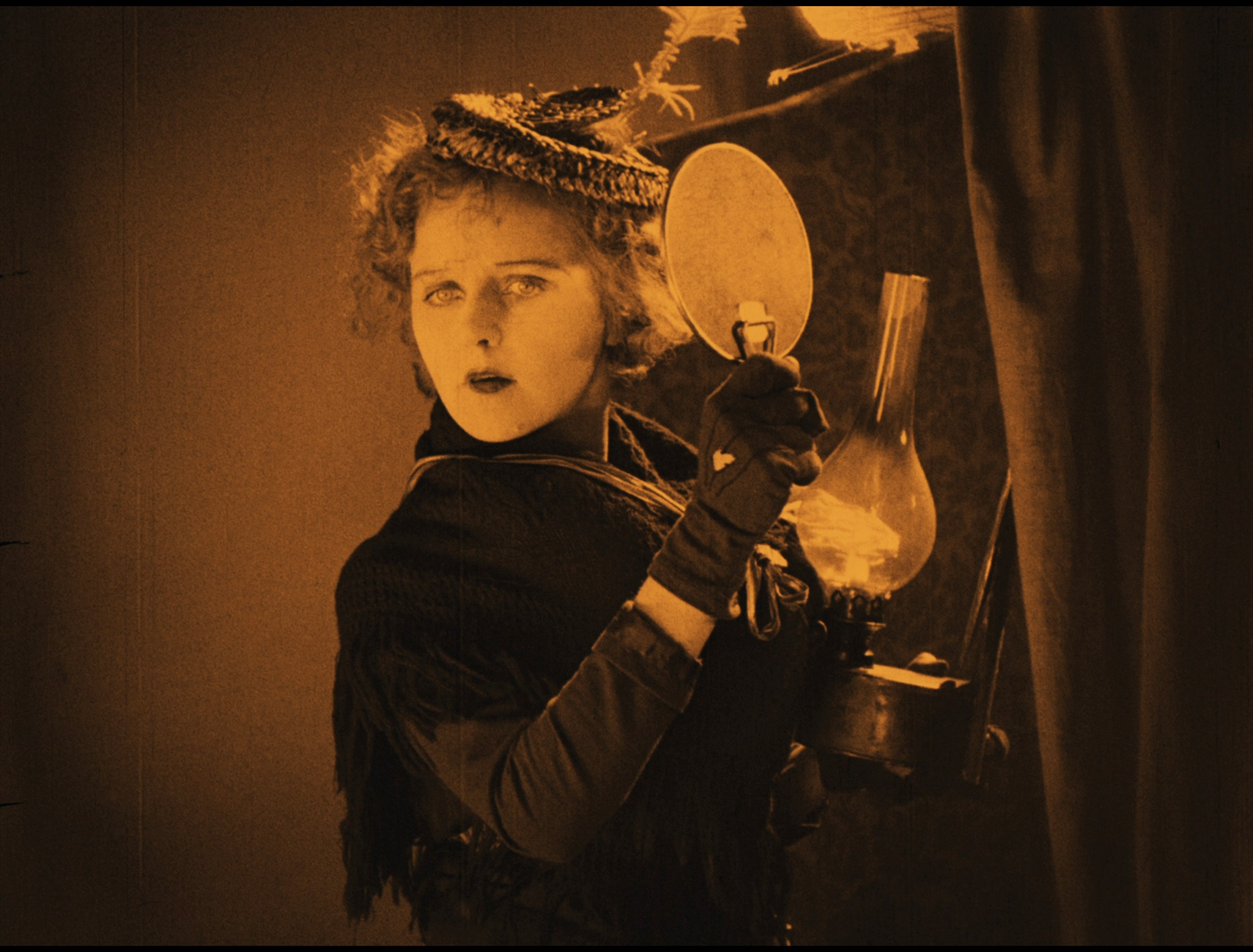 Betty’s rise to become Britain’s most popular entertainer was no accident: a phenomenally talented performer since childhood, she established herself as a star of variety and theatre before first appearing onscreen at the age of 18 in Nothing Else Matters (1920). She’s still a firm favourite of us UK-based silents aficionados, largely due to many screenings of her films at the British Silent Film Festival (article) and Kennington Bioscope. Many are lost but sadly none of the survivors, apart from Champagne, and only a handful of her talkies are available on home video:

Brown on Resolution (1935) is a stirring wartime actioner with  Betty playing the mother of John Mills in his first lead role. It’s based on C. S. Forester’s  1929 novel of the same name and was remade in 1953 as Single-Handed, which is also strongly recommended and has the wonderful Wendy Hiller taking over Betty’s part. Curiously, the first version has been issued under its UK re-release title, Forever England, while the second goes by its US title, Sailor of the King.

Squibs (1935) reunites Betty with Gordon Harker for the third time – the pair starred in the previous year’s My Old Dutch) – and they once again play father and daughter. It would be Betty’s last hurrah for the character, with whom she’d enjoyed great success through four silents and, unnamed, her first talkie, The Nipper (1930).

29 Acacia Avenue (1945), based on the play by Denis and Mabel Constanduros sees Betty reunited with Harker for the last time, on this occasion playing husband and wife. 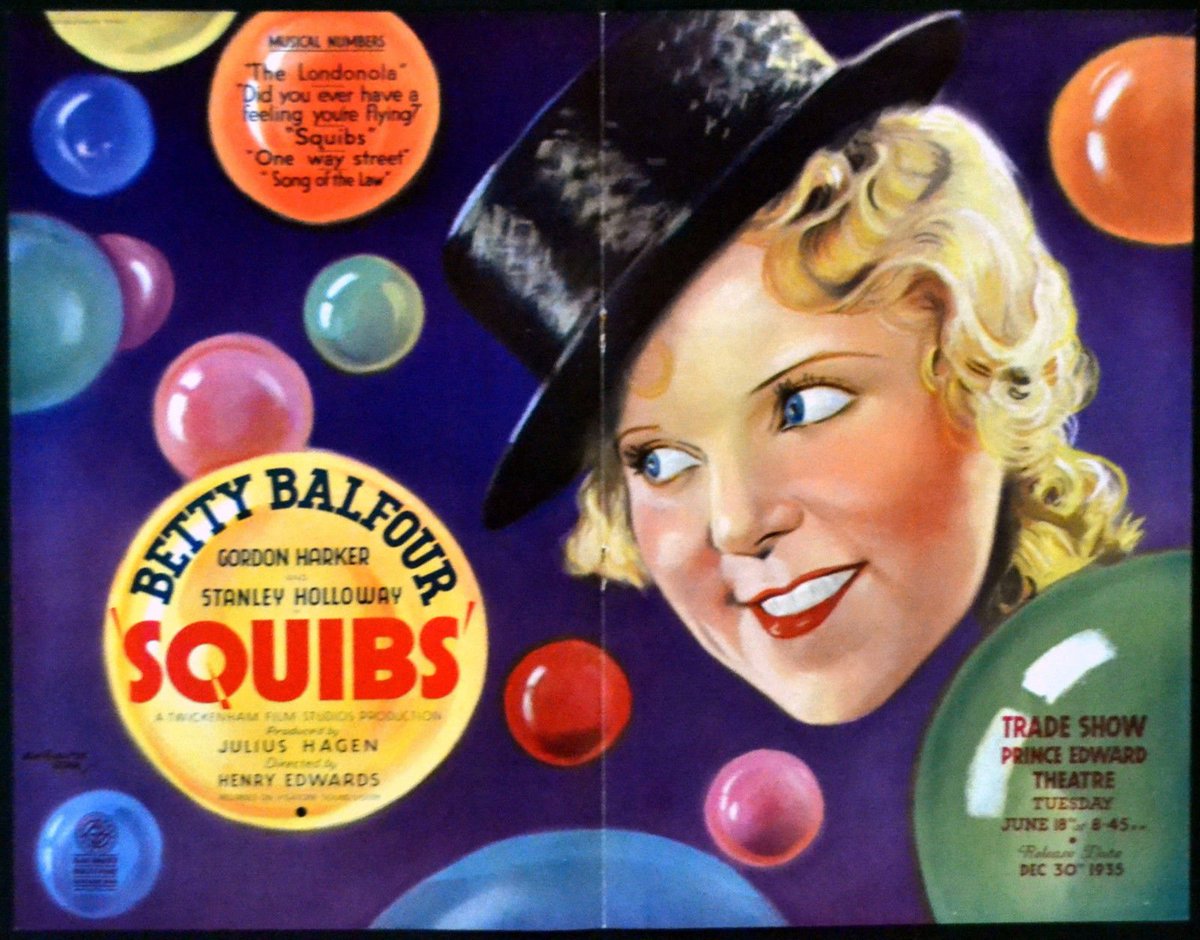 UK trade ad with artwork by A.W. Rossiter from the Star Illustration Agency