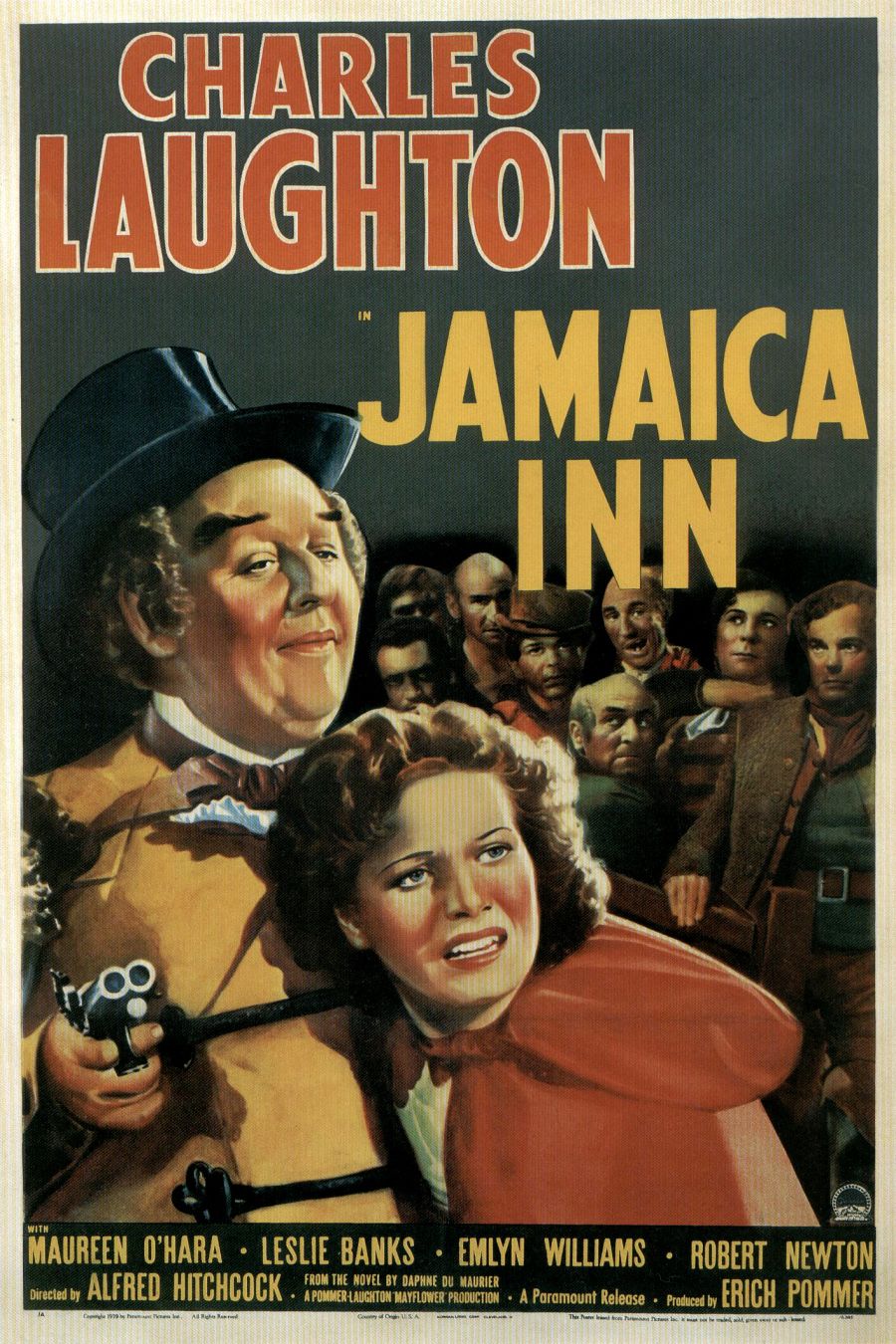 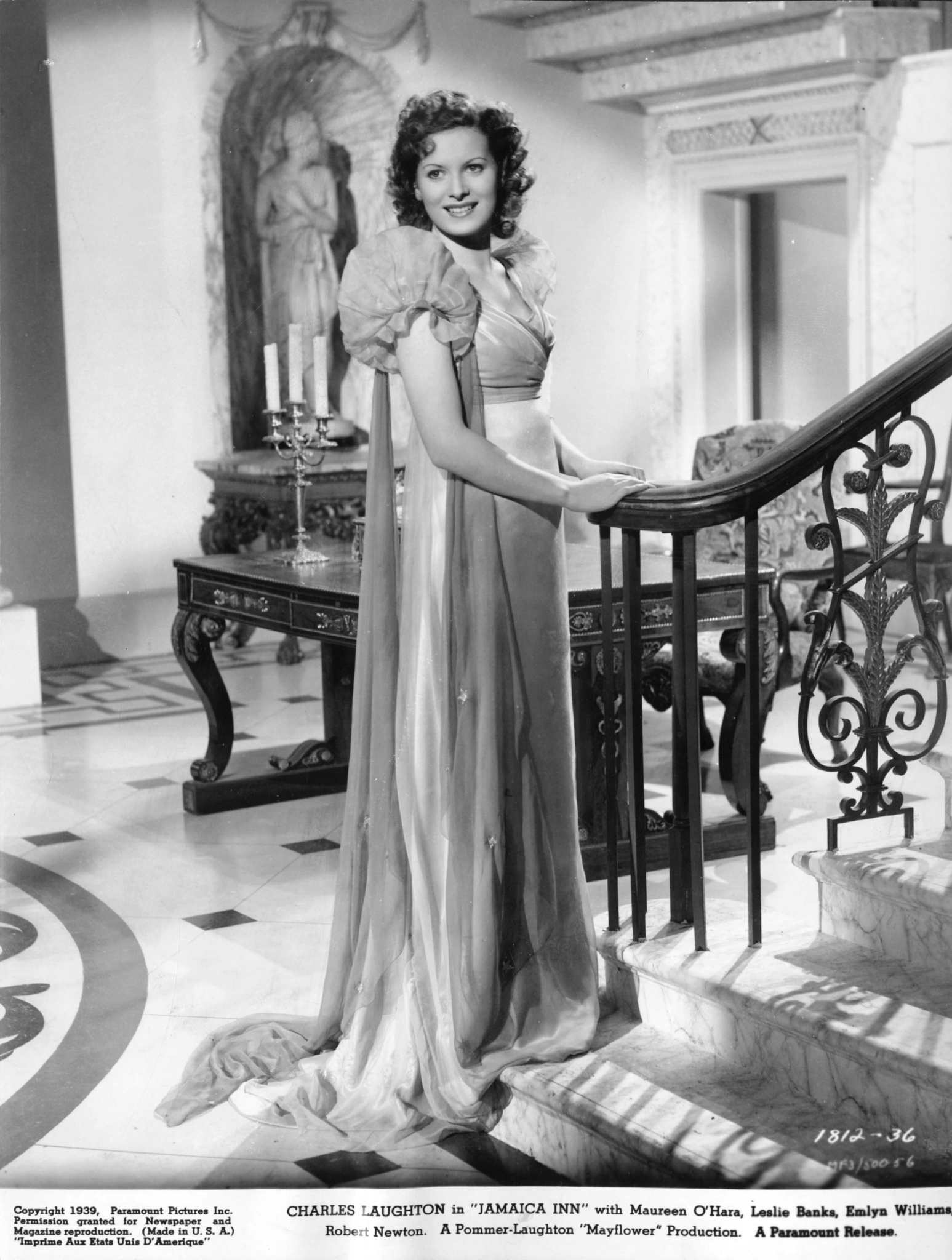 During filming, star Charles Laughton may have consistently overruled his director but he did make at least one fortuitous decision for Jamaica Inn: despite her testing poorly for an earlier film, he recommended 18-year-old, Irish-born Maureen O’Hara for the lead female part of Mary Yellan. Her character’s backstory was altered slightly to accommodate her Irish accent. Prior to that, her only cinematic outings were a bit part and support in a couple of films the previous year, under her real name Maureen FitzSimons. In an interview before the picture opened, Charles Laughton commented, “I told them [other cast members] we must all get behind Maureen and help. If we all tried, we could get her through it some way. Two days later, we were fighting for our scenes. That child was stealing the whole picture from us.” Of course, Laughton was very pleased with his new protégé and promptly whisked her off to Hollywood to appear opposite him in all-time classic The Hunchback of Notre Dame, which gave him his second blockbuster of 1939.

Laughton’s quote appears in Alfred Hitchcock: The Complete Films (2018, 688pp, info) edited by Paul Duncan, a comprehensive and lavishly illustrated tribute to the Master available in four languages. It’s accessible enough for a beginner, yet with 53 essays by experts on each of his films, has more than enough meat to satisfy even the most ardent fan. There are more books on the Master than any other filmmaker, bar Chaplin, but if you only own one, it should to be this. Most other overviews commit the cardinal sin of eliding the first half of Hitch’s life, including his fascinating British British career, in order to sooner get to his generally better known American films. They also often perpetuate many longstanding fallacies in the process; however, this thoroughly researched and engagingly written anthology does neither. Note it was previously published in 2003 and 2011 but the latest, much-expanded 2018 edition is the one to get. Creepy: Joss meets Mary and takes a more than avuncular interest in her

After playing the doting dad who risks everything to save his daughter in The Man Who Knew Too Much, Leslie Banks goes from hero to zero as Joss Merlyn, the brutal leader of Jamaica Inn’s cut-throat band of murderous shipwreckers. When he was in his mid-20s, the left side of his face was left scarred and permanently paralysed from active service in World War I. Ever after, for roles that required him to be a dashing lead, he was mostly filmed from the right; for monstrous characters from the left. In films such as his first credited appearance, The Most Dangerous Game (1932) – the best B movie ever! – it was even alternated to show the duality of his charming yet psychopathic nature. No prizes for guessing which is highlighted in Jamaica Inn. Though already a fairly well-built six-footer, here, as with Laughton, he was amply clad in voluminous padding to make him appear even larger and more menacing. Banks was a brilliant and versatile actor who died relatively young at 61 with so much more to give. Why has no one written his biography yet?

Banks’s injuries also left him with pronounced strabismus; of course, the film’s star, O’Hara, had it naturally occurring to a slight degree. It’s hardly noticeable unless pointed out but is, in common with fellow redheads Norma Shearer, Deborah Kerr and many other actors before and since, one of the subtleties that makes her looks not just appealing but interesting. Flawed to perfection. The cast also included a whole host of well known British character actors, at least eleven of whom had worked with Hitch before, many on multiple occasions. These included Clare Greet, who went all the way back to 1922 and his first uncompleted film, Number 13, and beyond, appearing in at least ten that Hitch worked on, more than anyone else.

Lucky man: following this film, Robert Newton came to be known as the quintessential onscreen buccaneer, playing Long John Silver twice (1950, 1954) and starring in Blackbeard the Pirate (1952). But this time, he’s on the side of the angels.

Jamaica Inn was shot in September and October 1938 at Elstree Studios, London, and on location in Cornwall. The first previews took place in May 1939, with a general theatrical roll-out commencing in October the same year. Although a strong commercial success on its initial release, artistic expectations were so high in the wake of Hitch’s winning streak that critics, though generally positive, had unanimous reservations. The consensus was that while an admittedly good night out, overall it made for a second-tier Hitchcock but a first-tier Laughton film.

As I said, Jamaica Inn receives frequent criticism for supposedly being a “lesser Hitchcock”, yet a so-called lesser film from the Master is still better than the very best most directors are capable of. Were this the product of just about any other British filmmaker of the time, it would be hailed as a minor classic and a jolly (roger) good adventure yarn to boot. On the other hand though, if that was the case it’s extremely unlikely it would have received as many official releases – or bootlegs! – as it has, or an expensive restoration. So enjoy the film on its own terms and appreciate the fact we can now see it looking and sounding far better than at any time since its original cinematic outing. 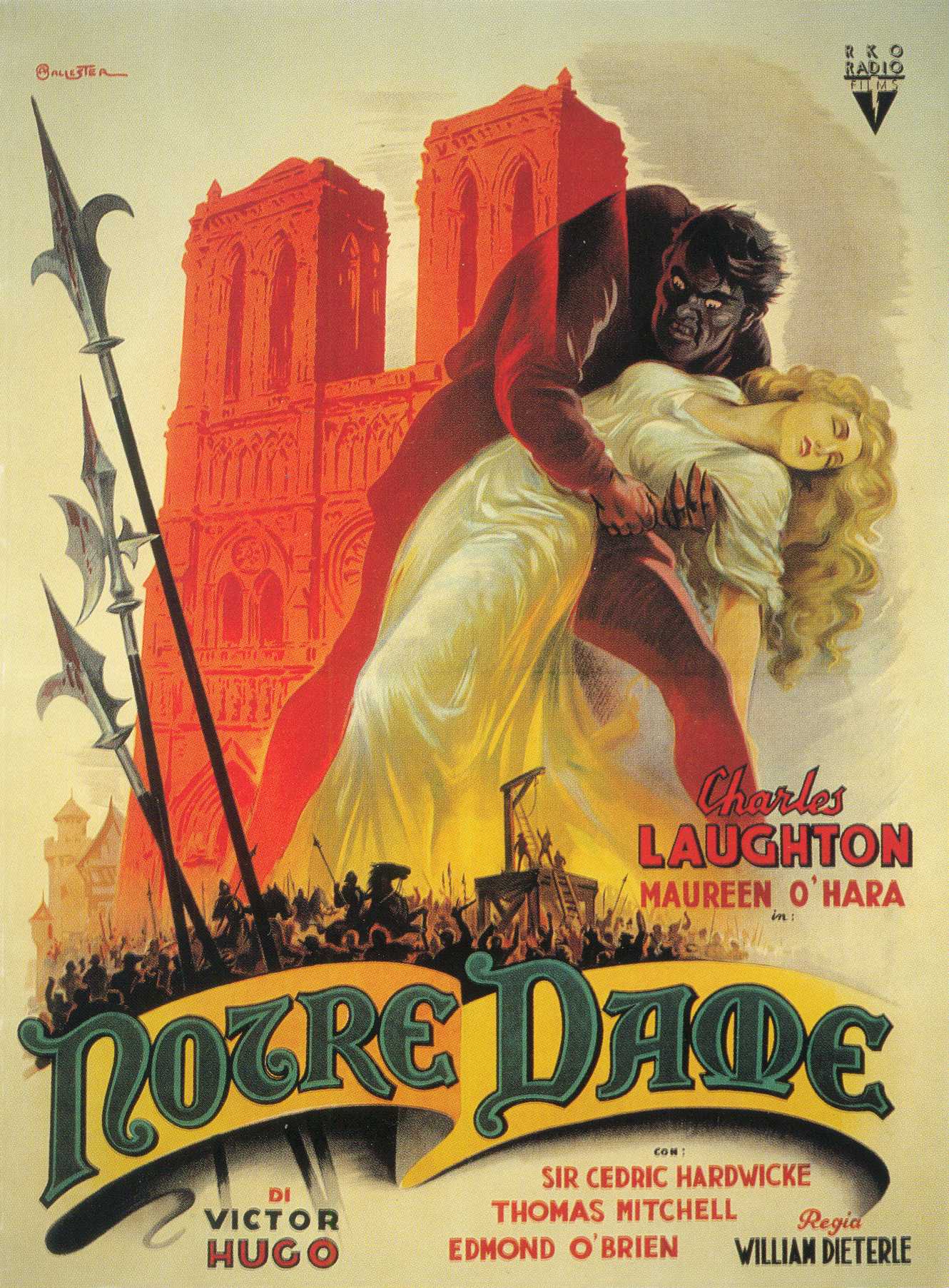 1948 Italian post-war release poster by Anselmo Ballester, creditably styled after late medieval paintings. Original studio publicity materials obscured Quasimodo’s face to build anticipation for the film’s big reveal, as per Lon Chaney’s makeup for The Phantom of the Opera (1925). However, a few European poster artists belatedly attempted to imagine it without having seen the film, as happened here, but they all got it wrong. Disfigured he may have been but he was definitely not demonic.

A grotesque mob chokes the streets of medieval Paris, celebrating the Feast of Fools. Dirty, ignorant and disease-ridden, the revelers search for someone ugly enough to be crowned Pope of Fools. Suddenly, the merriment collapses into a shocked silence as a figure appears, crouched under the weight of an enormous hump, one eye staring blindly, the other suspended half-way down a misshapen cheek. So begins one of the most literate, thrilling and poignant films ever made, the 1939 RKO version of Victor Hugo’s The Hunchback of Notre Dame.
Academy Award winner Charles Laughton stars as Quasimodo, the deformed bell-ringer of Notre Dame and Maureen O’Hara is Esmeralda, the beautiful Gypsy he adores. You’ll never forget Laughton teetering atop the magnificent cathedral (the opulent sets were among the most expensive in RKO history) or his heartbreaking closing line in this cinematic masterpiece. – US Image LD (1985/1989)

However, Warner Bros.’ beautifully restored transfer is the way to go, as borne out by Caps-a-holic’s BD vs De DVD comparison. It can be had streaming in HD and on Warner’s region 0 BD, identically released in four countries; and on the latest discs from Germany’s Filmjuwelen.

The US DVD includes 87 pages of cast, crew production and historical bios, mostly absent on other discs; a making-of featurette with Maureen O’Hara (12:09); and the 1952 US re-release trailer (1:50), slightly recut from the lost original, though the German is extant (below). The BD drops the text screens and adds a WB cartoon, “The Lone Stranger and Porky” (1939, 7:26); and an MGM Short, “Drunk Driving” (1939, 21:28). The German Filmjuwelen discs have the featurette, 1952 US and 2021 German trailers (both linked below), an audio commentary by Rolf Giesen, a slipcase, reversible sleeve, 20-page booklet, English and German subtitles, and the German dub.

Unfortunately, several other extras are currently MIA. There were three US LaserDiscs, from RCA (1981), Image Entertainment (1985/1989) and TCM/Image (1996). All but the first contain a commentary by film historian Paul Mandell, while the last additionally has an interview with Maureen O’Hara and a making-of featurette that, as far as I can tell, are different to the Warners doc. They’re rounded out with an intro by critic-historian Robert Osborne and the trailer.

Incidentally, in 1988 the film was colorized in standard  definition by Turner Entertainment, who subsequently released it on a 1991 VHS in at least the US and Germany; here are some samples. 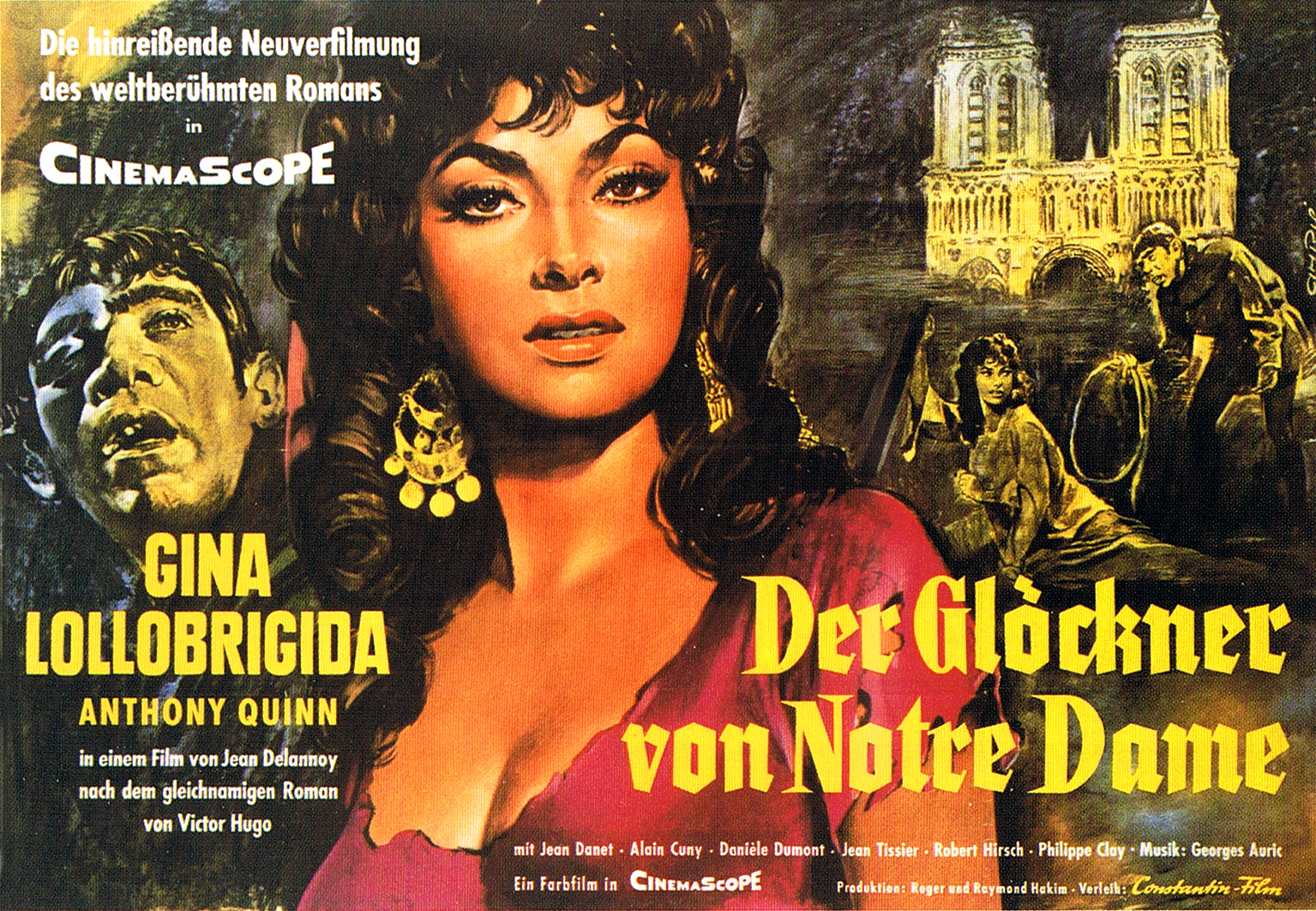 Laughton’s 1939 Hunchback was one of the standout releases in Hollywood’s fabled “Greatest Year” and she was now on the way to starring in a string of American classics. By strange coincidence, O’Hara’s strongly rumoured future love interest Anthony Quinn, with whom she made no fewer than six films spanning 1942–1991, starred in the epic 1956 French-Italian remake, Notre-Dame de Paris. A luminous Gina Lollobrigida co-stars and prolific composer Georges Auric provided a vastly underrated score. It was made in French with an alternate English-dubbed version that has one reshot scene and loses a couple of others totalling 10 minutes, to avoid offending delicate American religious sensibilities. Worth noting is that the 1957-released English dub version is largely rewritten from the original French, rather than being a more or less direct translation. While the basic framework of the story remains, it’s a very different and certainly much less earthy film overall.

Unfortunately, it’s a much less happy or straightforward situation with quality editions of this title than its illustrious predecessor. For starters, there are more bootlegs than kosher discs, including those from Italy (A&R Productions), Germany (Crest, Laser Paradise) Spain (Regia/reissue, Suevia) and various east Asian efforts, like this. These official releases, along with their subtitle and extra dub options, are the only ones worth your time.

The English version has only been officially  released on a so-so, non-anamorphic US DVD with the US theatrical trailer and no other soundtrack options; all other releases have the original french soundtrack and various optional subtitles, dubs and extras as noted.

The original French version has only one English-friendly French DVD that’s barebones but anamorphic. There are two other anamorphic French and German DVDs with extras including a French half hour making-of featurette (29:11) and trailer (4:12) – but neither are English-friendly.

Furthermore, Lon Chaney’s Hunchback is getting a new blu-ray release from a 4k restoration from Eureka in the UK, due Oct 17, 2022:
https://eurekavideo.co.uk/movie/the-hunchback-of-notre-dame/