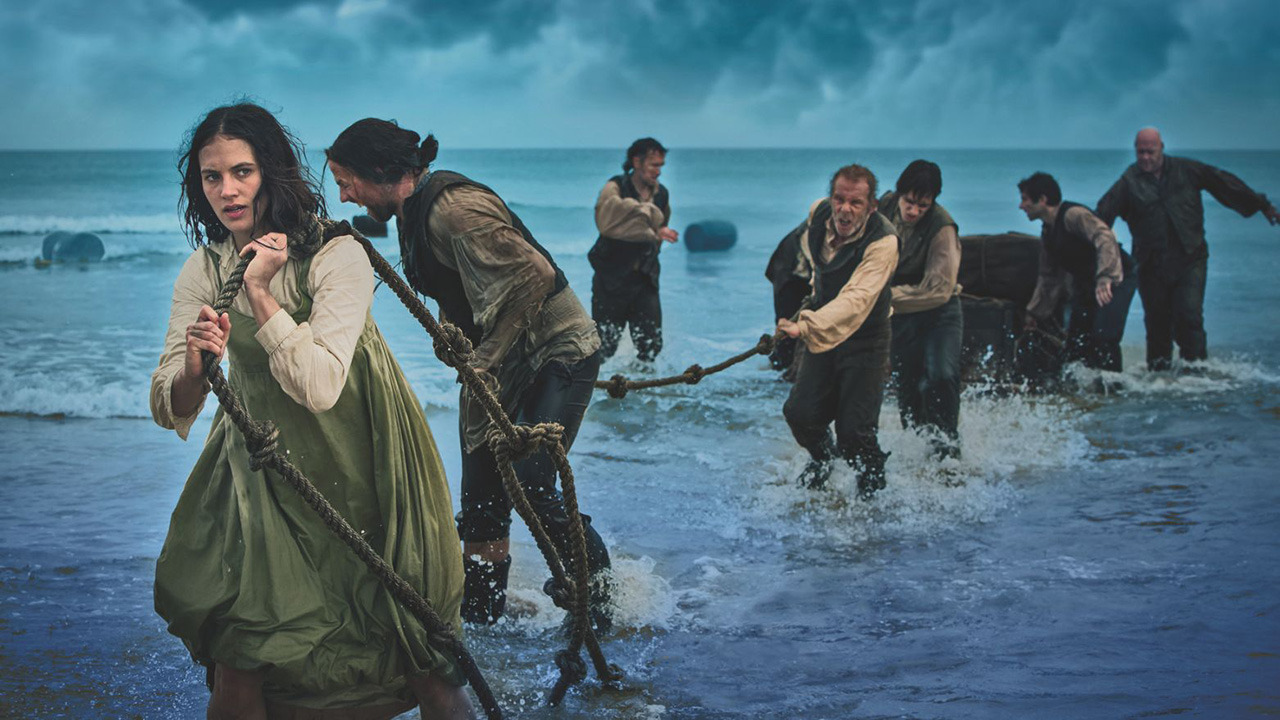 Inn on the radio

In addition to several stage adaptations, Jamaica Inn has generated one American and over a dozen BBC radio dramatisations dating from the year of Hitch’s film right up to the present day. However, the only ones currently available are a trio of recordings from 1984, 2003 and 2015. To catch the other British entries, listen out for occasional repeats on BBC Radio 4 Extra. Here’s the 2003:

There are also several audiobooks, including a tie-in recording by one of the stars of the first screen remake. 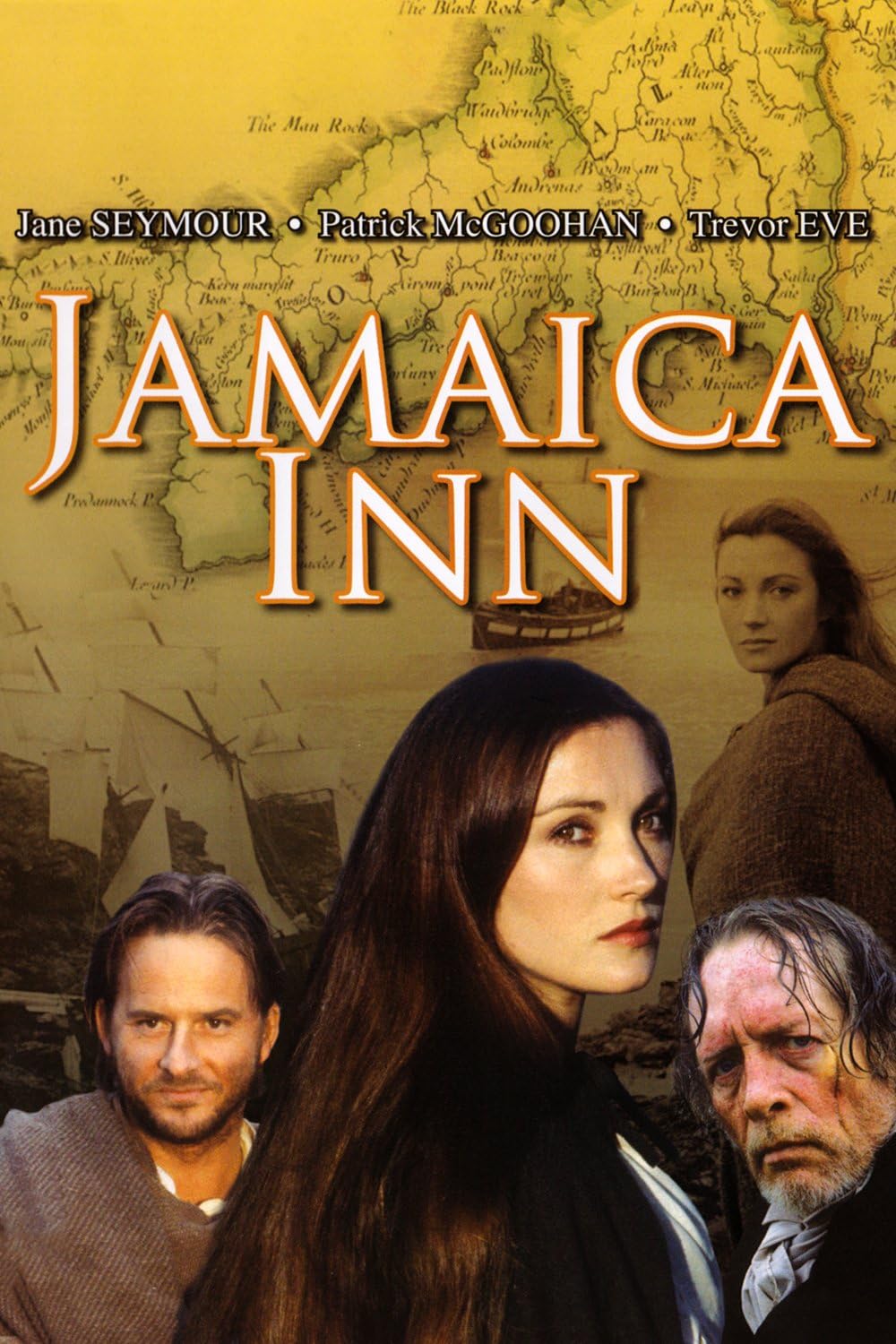 Beginning several decades after Hitch’s adaptation, Du Maurier’s novel has been restaged several times for the small screen. First to surface was this 187-minute miniseries starring Bond (and Harryhausen!) girl Jane Seymour, Patrick “The Prisoner” McGoohan and Trevor Eve, who is perhaps best known for playing detectives Eddie Shoestring and Peter Boyd. With time to flesh out the story more fully and faithfully than Hitch’s version, this sumptuous production makes for a highly entertaining experience. Aside from one inland scene shot in adjacent Devon, it has the unique distinction of being the only version filmed entirely on location in Cornwall, the setting of the novel.

When first broadcast stateside, around 30 minutes were unceremoniously cut, leaving the results looking decidedly disjointed but thankfully that compromised version has never been officially released on home video. However, US buyers beware: there’s been no licensed domestic DVD release yet; the only official outings have been on VHS. The many discs floating around eBay, iOffer and the like are, ahem, pirates, with edited TV or YouTube-derived transfers. If you’re really lucky (sarcasm), some might be lifted directly from one of these official VHSs:

These official DVDs are the best way to go; they’re all completely barebones, without even any subs, though the German disc has an optional dub. I assume the series was shot on 16mm or, possibly, 35mm film then transferred and edited on standard definition videotape, from whence all broadcast and home video editions are derived. Thus, we won’t be seeing it in better quality anytime soon unless the rights holders decide to pony up the cash to get the original negatives scanned in HD and the entire production re-edited and mastered from scratch. Well, you never know…

The score, by Francis Shaw and the Royal Philharmonic Orchestra, was also excerpted on a 7″ consisting of “Mary’s Theme” backed with “Shipwreck”.

Unfortunately, I can’t find much solid info about this 90-minute French TV movie starring the 22-year-old Alice Béat and helmed by her father, director Gilles Béhat. What I do know is that it was shot in Manche on the northern French coast and apparently on 35mm film. This means although broadcast in the 4:3 aspect ratio, it was very likely primarily composed for 1.85:1 exhibition to facilitate a possible limited theatrical release, as is the case with many high budget TV movies. The bottom line is that this version has the potential to yield a beautiful HD widescreen transfer for streaming or Blu-ray. Right now though, apart from occasional domestic TV airings, it’s as yet unavailable.

Precisely matching the 1983 version’s 187-minute runtime and three-part miniseries format, this is possibly the most fully-rounded production yet. It ups the sexiness and angst quotient considerably and is a handsome looking beast, to be sure. The sweeping cinematography further distinguishes itself as it’s the only adaptation available in widescreen, while the audio is the most dynamically recorded yet, ditching all other versions’ mono for surround stereo. Despite that, it received thousands of complaints for frequently unintelligible dialogue on its initial airings. Its audio has possibly been retweaked for home video as it doesn’t seem that bad, but subtitles do still occasionally come in handy.

All four DVDs have English subtitles and by way of extras, 25 minutes of cast and crew interviews and nine minutes of behind the scenes footage, while the US adds a picture gallery. The US, UK and Oz all have 2.0 stereo audio, whereas the German and its optional dub are in 5.1 surround. This version, being a more recent production, was shot and finished in HD; at least one Blu-ray would have been welcomed but seems unlikely at this point.