Sadly, like most silent films, the 10 Alfred Hitchcock directed from 1925–1929 have been subjected to much abuse and loss of footage since their original release, with one, The Mountain Eagle, completely lost. However, the rest were recently restored: In 2012, the British Film Institute concluded a three-year drive to produce comprehensive new restorations of Hitch’s nine extant silent features, which they dubbed ‘The Hitchcock 9’. They were all photochemically restored during the 1990s, so several came with a head start as rather than starting from scratch, they were digital refinements of the earlier versions. Nonetheless, it was the largest and most costly such project the archive had ever undertaken and allowed the films to shine more brightly and completely than ever. Additionally, most of them received a new, specially commissioned score. The composers and musicians were a mixture of old hands at scoring silents and those new to the game, with the resultant accompaniments ranging from period to modern and many points in between.

Thankfully, apart from his one missing short, there are no major issues with any of Hitch’s British talkies. They’re all in complete, as-originally-released condition via their licensed releases. Some, like The Man Who Knew Too Much and Jamaica Inn, have also had very recent digital restorations and now look and sound incredible.

Despite the BFI spearheading his silents’ high profile restoration, the rate of labels willing to take a punt on releasing them has been disappointingly slow. Of course, the worldwide abundance of bootlegs, especially of Hitch’s British films, has played the biggest part in killing demand for licensed editions, especially in this age of declining physical media sales. Only a few of the silents have appeared so far and though there are ongoing efforts behind the scenes to make them publicly available, unfortunately nothing concrete has been arranged yet. Do keep checking back though, as I’ll be posting updates as and when appropriate. What I can say is if and when there is an announcement about a restored release, do spread the word and support it all you can. The release of any subsequent silents very much depends on the success of the next one. And fans not buying those bootlegs. We all need to spread awareness of these points, otherwise it’s quite possible the restored Hitchcock 9 will never be available on any form of home video in their entirety.

3.3.2019 update: The Pleasure Garden is definitely coming, but its release will require some additional financial investment to make it happen – see how you can help here.

Regardless, overall there’s never been a better time to sample Hitch’s British career and despite the seemingly confusing number of releases, there are fewer viable options than at first apparent, which makes things even easier. Do note: with relatively few notable exceptions, the majority of quality Hitch DVDs are European (region 2) PAL releases and there are only a handful of non-Euro (region B) BDs. If you don’t yet have multi-region playback capability, why on earth not? It’s easier and cheaper than you might think and crucial for acquiring the best versions possible.

Almost all authorised releases use the best prints available at the time of their production and include a moderate to copious amount of extras. Transfers on more recent DVDs are often improved even further and post-2012 releases of the silents obviously feature the Hitchcock 9 versions. Of course, even – especially – for films as old as this, the BDs look absolutely stunning and blow their DVD counterparts out of the water. Naturally, the uptick in terms of fine detail and grain resolution becomes more apparent the larger your screen. Having said that, despite not all of the latest restorations being released in HD, with the exception of The Pleasure Garden, the current editions all range from very good to magnificent.

Poster by Greg White aka TightywhiteArt, 2014

If you’re as yet unfamiliar with Hitch’s British period and initially just want to dip your toes in the water, allow me: of his silents, The Lodger is easily the best-known and most widely available. However, instead I strongly recommend the more punchy, thrilling Blackmail as your first port of call. Quite honestly, The Lodger, as great as it is, wouldn’t even get my vote as second-best Hitch silent; that honour would likely go to the restored version of his first film, The Pleasure Garden. Ahead of its eventual – hopeful – home video release, I urge you to catch a live screening anytime you get the chance. As for Hitch’s talkies, you can’t go wrong with The Man Who Knew Too Much original, The Lady Vanishes or especially my fave, The 39 Steps. If you plan to pick up a goodly chunk or even all of Hitch’s silents and early talkies, you should start by getting at least one of the box sets covering the period:

Note that ownership of Hitch’s British films is evenly split between ITV and Studiocanal, with the exception of Jamaica Inn (Cohen), therefore most box sets tend to only consist of films from either company. All the above are derived from the same superb masters and pretty much interchangeable in terms of quality. It’s generally best to acquire whichever happen to be cheapest and easiest domestically, unless you really need subtitles in another language. Note that the first two French sets have non-removable subs, so choose another unless you’re prepared to put up with them. Alternatively, you may rip and reburn the discs, omitting the sub stream. A few players, like those from Oppo, have a useful “subtitle shift” feature to move them completely offscreen. Once again, these are all of the official box sets of Hitch’s early years. Any others are bootlegs.

Despite what the odd erroneous listing may say, almost all licensed releases worldwide are fully English-friendly with original English audio or intertitles by default and where present, optional subs. The sole exceptions are some French DVDs with forced French subs, including their German-language Mary. After you’ve acquired a suitable box set or two, you can fill in the gaps with individual releases, especially those from Network or Criterion. If you intend building a career-spanning Hitch DVD collection from the ground up, by all means start with one of the massive, English-friendly French or Benelux box sets. Just one of those will enable you to pick up half of his films in one go. Most links throughout the series of guides lead to places you can buy the item in question; if not it’s because they’re rare or deleted and I could only find temporary listings, eg eBay. In those cases, I’ve at least linked to relevant info on the release that may help you source it elsewhere.

Streaming video services may have largely usurped physical media in recent years but if you’re a fan of classic film and especially of Hitch, you’ll very quickly realise their limitations. Netflix, Disney Plus, et al. may have their place but carry relatively little pre-2000s content, although the former is slowly improving in that regard. The Criterion Channel, Kino Now, TCM, Peacock and HBO Max are excellent options, providing you live in the US, while the UK’s BritBox and free-to-air Talking Pictures TV are also absolute champs. It’s also always worth checking out Sky UK and BBC iPlayer. But broadcasters like these aside, in most cases if you watch any old Hitchcock stream or download, especially – god forbid – via the likes of illegal uploads on YouTube and elsewhere, you’ve no way of knowing which likely substandard version you’re getting. Just don’t do it: the Master deserves much better.

At least most of Hitch’s American films, apart from Under Capricorn and the four Hitchcock-Selznicks, can be bought widely in decent quality online. They feature the latest transfers, which thankfully correct various faux pas present on the earliest physical releases, such as having the wrong aspect ratio, or the censored version of Psycho. But newest is not always best, as some introduce new faults of their own. Many Hitchcocks, including To Catch a Thief, Vertigo, North by Northwest and Psycho, have gimmicky, 5.1 surround sound remixes that are nothing like what Hitch designed for them. Sadly, streaming copies only carry the revisionist remixes, so caveat emptor. With judiciously chosen physical releases, you at least get the option of experiencing them just as the Master intended; aspect ratio, editing, audio and all.

Amazon, Google Play, YouTube Movies and others are also awash with crappy pirated uploads, so bear in mind that only a handful of Hitch’s pre-1940 British films are officially available for streaming in the US and only two outside of it: Downhill and Jamaica Inn . Legitimate streams on Amazon and YouTube are detailed individually throughout this series; as ever, if it isn’t listed don’t watch or buy it. Some other services, like iTunes and Vudu, are more diligent about checking their sources are kosher, so buy with confidence. But for the foreseeable future, there’s no doubt that when it comes to properly experiencing and appreciating Hitchcock, physical media is best overall.

We’re incredibly privileged to be able to collect almost all of Hitch’s British films in excellent condition on home video, but there are a few casualties. Aside from those missing in action, the only print of The Pleasure Garden currently available is heavily butchered and one to skip unless you’re desperate, in which case set your expectations low. At least we’ve the fully restored Hitchcock 9 version to look forward to, unlike with poor old Easy Virtue, which only survives in battered, incomplete condition. Not to worry: that still leaves us with a whopping 22 of the Master’s motherland masterpieces to enjoy unfettered, along with a couple of other films he also worked on and the prospect of more to come. Happy uneasy viewing!

Films in the Collectors’ Guide 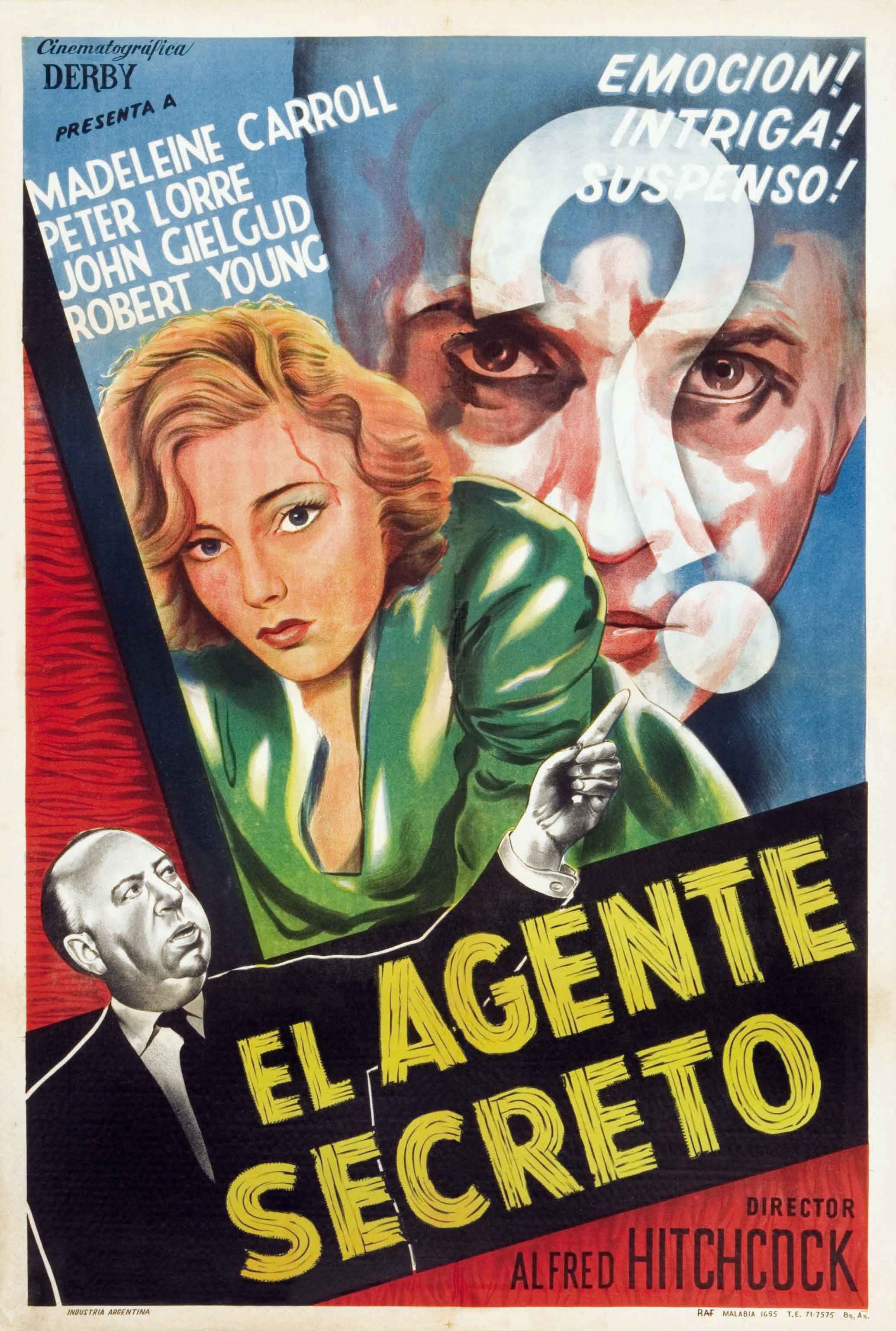 Tellingly, the poster above depicts Hitch as he looked at the time it was printed, not as he did when making the film around three decades earlier. Despite being widely recognisable, especially due to his cameos, Hitch’s regular appearance in publicity materials largely commenced from the mid-1950s. But once Alfred Hitchcock Presents made him a household name – and face – it definitively marked the point when he became at least as famous as any of his actors or films.

Hello! First of all I love your content and I thank you for that. I’m beginning to get into Hitchcock’s work and I wanted to know if you know of a box set of his early british, silent films that are for Region 4 (South America, Australia and New Zealand) because I live in Mexico and I would love to have one of these sets of movies.
Greetings!