Steps on the radio

There are many radio adaptations of The 39 Steps continuing up to the present day, including at least seven contemporaneous American productions. Most of those were based on the drastically rewritten film rather than its source, the 1915 novel by John Buchan. Between them, several feature numerous cast and crew members of films Hitch made on both sides of the Pond. The first British radio adaptation, by the BBC, wasn’t until 1939, though they’ve redone it regularly ever since. However, that and all subsequent radio readings have reverted to the plot and non-numerically-spelled title of Buchan’s source text. Listen out for occasional rebroadcasts on BBC Radio 4 Extra.

“7-7:30 p. m. WSOY Suspense—Herbert Marshall in “Thirty-Nine Steps,” a swiftly-paced study in terror, showing how an ordinary citizen can—through a sudden quirk of fate—become the No. 1 target of a murderous gang of international spies.” – Decatur Sunday Herald and Review, Sunday March 2, 1952

Also legion are the many entertaining live staged, old-time radio-style performances but these are invariably based on Hitch’s film, like Vintage Hitchcock: A Live Radio Play (2000, script). It’s a light-hearted three-parter also incorporating The Lodger and Sabotage, is oft-performed (Facebook/Twitter) and there are various excerpts and trailers on YouTube.

The most recent entry may not be Hitch-style all the way, being based more directly on the book, but it does have as many radical deviations from the source as its cinematic predecessor. And it incorporates all the irreverent spirit of the hit comedy stage production. The BlackBox Theatre Company toured their unique take around South East England in late 2019, then produced a specially recorded version to help raise funds for two very worthy causes. Go on, give them some love – and money.

This is the definitive version of one of the most famous thrillers in the English language, John Buchan’s The Thirty-Nine Steps. When Richard Hannay (Kenneth More) picks up a baby’s rattle in Kensington Gardens, he unwittingly sparks a fuse that leads to espionage, intrigue and murder. What is the key to a dying woman’s mysterious words – “The 39 Steps”? Who is the mysterious brain at the head of a deadly spy organisation that threatens the very heart of British security? The 39 Steps is a thriller that never loosens its grip and includes some of the most famous set-pieces in British cinema. – UK VCI VHS (1986/1989)

Various screen remakes have inevitably followed, with the first two by rights holders the Rank Organisation, who in 1941 bought Gaumont-British, makers of the original, and its sister company Gainsborough Pictures. The first, starring acting stalwart Kenneth More, was based directly on Hitch’s film rather than Buchan’s novel and had Finnish-born actress Taina Elg substituting for Madeleine Carroll. It’s doomed to be forever adversely compared to its predecessor, but is actually a cracking little film in its own right. Aside from a few early VHSs, there have only been a few legit releases to date:

Those in the market for the source novel may like to pick up a cheap copy of the 1959 film’s tie-in paperback (sleeve).

Unfortunately, when it comes to choosing between the DVDs, it’s six of one and half a dozen of the other. The US VCI disc is pretty much in the correct widescreen aspect ratio (AR), being 1.78:1, negligibly different to the theatrical 1.75:1. But it’s a straight PAL-NTSC transfer, so is slightly compromised with the video artifacting and audio anomalies common to that cost-cutting practise. The region 2 PAL editions, meanwhile, are in the correct format As the PAL discs have superior A/V, I come down on the side of getting one of those and zooming in to crop to approximately the right AR. But whichever you go for, do keep your fingers crossed for an eventual widescreen HD release. Oddly, as you can see above, VCI’s widescreen trailer has been horizontally squashed back up into a 1.33:1 AR, giving it the worst of both worlds. Most incompetent.

This version is copyrighted until the end of 2071, the 2001 death of director Ralph Thomas plus 70 years, but as with Hitch, once again beware the bootlegs. For both this and the 1978 version, there are numerous homemade DVD-Rs floating around eBay, iOffer, etc, falsely claiming the films have pubic domain status. Among other professional-looking but still-crappy quality pressed discs are various pirates from the US (Reel Vault), Italy (Sinister Film), Germany (FNM) and Spain (Llamentol).

“Here’s a real thriller to stop the clock!” – Sunday Mirror
“The Thirty Nine Steps is to be recommended without hesitation.” – Sunday Express

Every second counts as Britain hovers on the brink of war!
It is 1914. Europe is on the brink of war. London seems peaceful enough but a dangerous conspiracy is under way… Colonel Scudder of the British Intelligence has unearthed a plot to assassinate the Greek Prime Minister on a visit to London and thus precipitate World War 1. Richard Hannay, an engineer on leave in London, becomes implicated and there follows an exciting series of hair’s breadth escapes, of plot and counter plot, as Hannay attempts to solve the riddle of the Thirty Nine Steps… – UK Rank VHS and LaserDisc (1984)

Conspiracy… intrigue… and sudden death! This fast-paced thriller plunges you into the high-tension world of master spies!
Let this action-adventure thriller lead you step by step into a deadly web of conspiracy and international intrigue! Richard Hannay (Robert Powell), an engineer on leave in London, has no idea that his guest, Colonel Scudder (John Mills), a British intelligence agent, is being hunted by the sinister Appleton (David Warner) and his Prussian agents. After finding—and slaying—Scudder, Appleton and his men begin stalking Hannay as well. Terrified, angered, and confused, the engineer only knows he must unriddle the secret of the 39 steps—before it’s too late! – US MHE VHS (1985) and Image LaserDisc (1988)

Version three stars Jesus Christ himself, Robert Powell, who also presents the “Hitchcock: The Early Years” (1999) featurette appearing on every other release of the Master’s British films. There was actually another 1978 remake, Chakravyuha (The Labyrinth), from India. Naturally, it came complete with a couple of obligatory song and dance numbers, but it’s all but unavailable non-domestically. This version hews closer to the novel, reinstating its alphabetic title (minus the hyphen) and 1914 setting rather than the contemporary staging of the previous two. But it does add a new ending (spoiler alert) with our intrepid hero hanging off the face of Big Ben, à la Harold Lloyd in Safety Last! (1921), though in this case it’s more directly inspired by the climax of Will Hay’s final film, the 1943 comedy My Learned Friend. In 1991, Powell narrated an unabridged audiobook (3h 53min) of Buchan’s novel.

Steps’ UK ITV DVD has some extras by way of its original trailer and “On Location” featurette hosted by Powell, though the latter is dropped for the Carlton reissue. It’s a pity, as the featurette is quite cool in revisiting key locations for all three versions made at that point, and serves as a nice primer for a triple marathon. The Oz R0 PAL DVD, which is very scarce non-domestically, even improves on the ITV as it includes both extras plus several image galleries and two PDFs of première programmes. Conversely though, the less said about the French dub-only DVD, the better.

The film’s superb score was composed by Ed Welch, who has an impressive résumé of music for British films and TV programmes. It was released on LP in the UK and Spain, and a three-minute extract of the eponymous opening concerto, retitled “Hannay’s Theme”, fronted a couple of UK promo 7″ singles. The LP is now rare and secondhand copies are quite pricey, but the good news is Quartet Records are due to reissue it in late 2020. 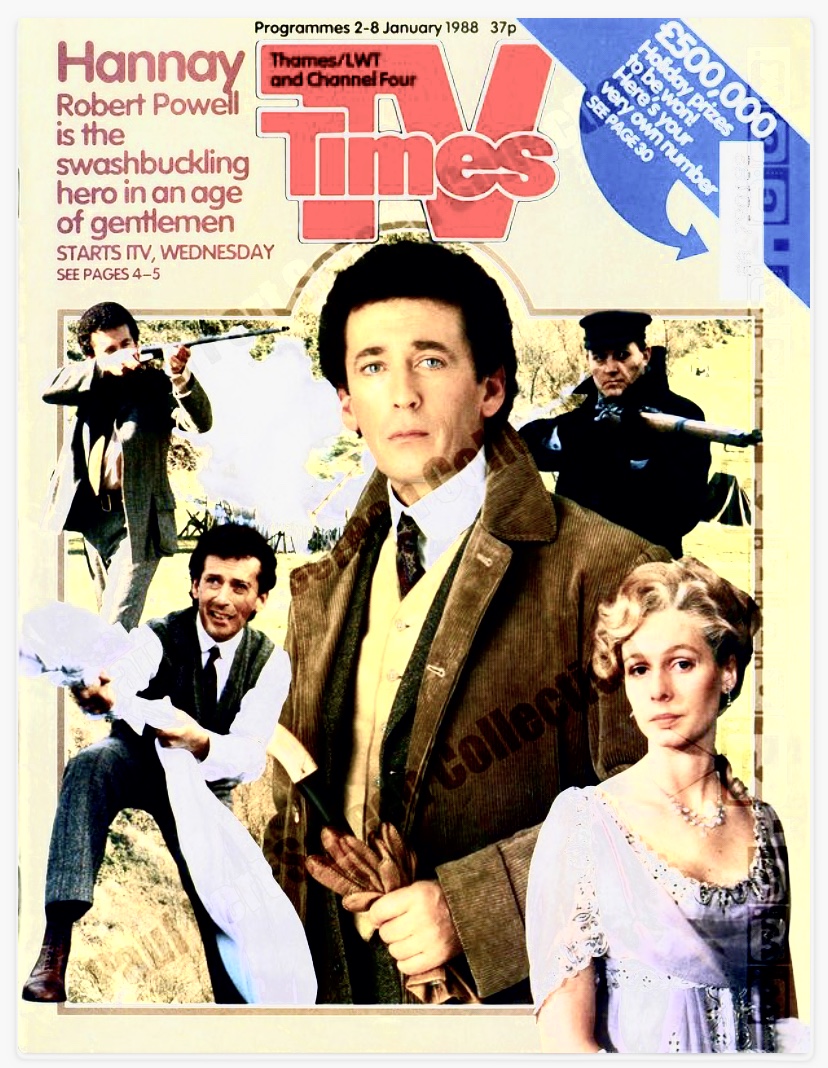 A decade later, Powell reprised his derring-do role in Hannay, an ITV series running to two seasons totalling 13 episodes. It departs even further from Buchan’s novels by not being based on them at all, though it is peppered liberally with character and place names from them. It stays somewhat within the spirit of Buchan’s writing, though is definitely more tongue-in-cheek. Needless to say, if you’ve enjoyed any of the films mentioned so far, you owe it to yourself to check it out. If not, don’t. But then, why are you reading this, hmm?

The BBC have long had a thing for adapting Buchan’s works in various media, doing so literally dozens of times, and in 2008 finally got around to tackling his most famous work of all onscreen. Despite it débuting on terrestrial TV, their version of The 39 Steps was actually shot on 35mm film with a relatively high budget. Though it uses the novel as a jumping-off point, it introduces many new touches, including a completely rewritten ending. These are to help update it with a strong nod to the likes of Bond and Bourne who are, of course, Hannay’s spiritual child and grandchild anyway. What’s more, not content with simply being a remake of one classic, it throws in a version of the crop-duster scene from North by Northwest – which is itself Hitch’s own quasi-remake of The 39 Steps! Overall, it’s a perfectly fun and thrilling romp though it attracted no small amount of criticism for the prevalence of slightly anachronistic props and settings. What the hell’s wrong with these people? Did they mistake it for a documentary? Forget the naysayers; it comes highly recommended from this quarter.

As for the future, the remake train rolls on with no sign of slowing down. In 2016, yet another BBC adaptation was in the works, as a six-hour miniseries. However, things went quiet until the 2021 announcement of another series of six hour-long episodes adapted by a different team for Netflix and starring Benedict Cumberbatch. Whoever finally brings him back to the screen, Hannay’s adventures are far from over yet.

As a Hitchcock fan, thanks for these guides. They are very interesting and I have learned a lot of things I didn’t know.