Though quality licensed editions of Hitch’s iconic film have become more prevalent in the last couple of decades, they’re still hugely outweighed by the sheer number of bootlegs and pirate copies of this classic film. They’re fine, if supporting thieves and watching shoddy copies of otherwise pristine masterpieces is your thing. Every official release is listed below; if you can’t find it here, don’t buy it.

The US Criterion Collection’s first releases of the film came in 1985 and 1989, when they issued it on VHS and Betamax alongside their LaserDiscs (spine #4). They’re also missing the brief shot described above. The label’s only other tape releases were The 39 Steps (#3) and The Third Man (#5). Criterion’s transfers were more widely re-released on VHS by Janus Films via Home Vision Entertainment a decade later but all their original tapes are now extremely rare and collectible. They cost $39.95 each when new, the equivalent of $100 in 2021 but you’d be lucky to pick them up at even the adjusted price now! Here are Criterion’s pre-DVD releases of all three films:

Criterion’s VHSs have the further distinction of being two of only three British Hitchcocks to be officially released on that format in the US, the other being Jamaica Inn from Kino Lorber. Note there were just two other official LDs of Lady, a 1982 issue from Rank in the UK and an obscure 1984 Dutch disc from short-lived label Televizier. Added to those were a trio of Japanese bootlegs. Rounding up, Criterion also released four other British Hitchcocks but on LD only: Blackmail, Secret Agent, Sabotage and Young and Innocent; that’s it for official pre-DVD US releases.

Firstly, note that the 1998 Criterion DVD is missing six seconds of footage around 10 minutes in, creating a slight continuity error. This is probably a holdover of an original US censor cut, as it’s during a slightly risqué scene involving a maid bending over to retrieve a hat from under the likely gay couple C&C’s shared hotel bed. Although also missing from Criterion’s earlier format releases, described below, it’s present and correct in all their later editions. Quite predictably, it’s also missing from most bootlegs. Unless you’re a Criterion Collection Completist, there’s really no need to acquire this disc as it’s been wholly superseded by their remastered reissue, also detailed below.

Aside from the Criterion issue, The Lady has always looked pretty good on home video although her initial transfer to DVD met with variable results, as the screenshots below will testify. They range from passable to quite good but the German DVD easily boasts the best transfer among this batch, being on a par with the remastered releases below. In fact, I think it has the best DVD transfer of all. It’s only available as part of a box set and has no extras, save for the ubiquitous “Hitchcock: The Early Years” featurette (1999, 24:34) and some image galleries elsewhere in the set. Not present is the 1971 dub (alt) recorded for the West German TV première. By far the most significant extra among this round of releases is a lengthy Margaret Lockwood documentary on the commercial ITV disc. Conversely, the French disc has the original, WWII-delayed release’s 1952 dub as an option but it also has forced French subtitles on the English track and its “Early Years” doc. It also has two French-language featurettes on the film (33 and 17 min). The rest are either barebones or have a smattering of minor extras in their respective languages.

Every release in this section is from the exact same superb HD master so your choice comes down to cost, extras, packaging, region and format – with a few particular exceptions from the US and France. It débuted on a huge, now deleted and exceedingly expensive DVD box set from Criterion but the discs themselves, including Lady, were all barebones and completely shorn of the label’s usually copious extras.

However, Criterion’s newly designed, region A/1 BD and DVD thankfully leads the pack that’s since emerged, being crammed with extras; not least of which is a whole second film, also in HD on the BD. Crook’s Tour features Basil Radford and Naunton Wayne in their hilarious Charters and Caldicott guises, following their initial scene-stealing appearance in Lady. Film historian Bruce Eder’s excellent commentary, originally recorded for Criterion’s 1998 DVD, has had some parts updated and corrected for this issue. There are also some relevant excerpts from the Hitchcock/Truffaut interviews accompanied by a slideshow (10:06) and a “Mystery Train” featurette (33:32) by film scholar Leonard J. Leff, author of Hitchcock and Selznick (1987/1999). Last but not least is an extensive gallery of production stills and publicity materials, and both formats are packaged with an informative 24-page booklet.

Hitchcock, Selznick and the End of Hollywood (1998), info, full interviews

But there are a couple of caveats: unfortunately, Criterion’s DVD transfers of both films, including Lady in the huge box set, are somewhat compromised by their short-sighted decision to windowbox them. This was intended to avoid losing image to overscan when viewed on now defunct CRT screens. But Criterion continued the practise long after the prevalence of flat panel displays, which have either no overscan or the option to turn it off. Criterion’s BD may well be free of windowboxing but some initial stand-alone pressings have deteriorated and will either not load the menu properly or play the primary film beyond the layer change. The playing surface on defective copies can still appear pristine. Later pressings, including those in the 2016 Hitch box set, are unaffected. If you have a faulty disc, email Jon Mulvaney for a replacement.

Of the legitimate Euro BDs, Network’s UK region B has a short video intro, the original trailer and a slideshow, all carried over from their earlier DVD.

Chugging on over to France, it seems bizarre they should get two BDs in quick succession when most countries are still waiting for just one but there’s a reason for it. Writer-producer-director Jean-François Davy is the founder of the Filmedia and Movinside labels as well as others, including the much earlier Opening, via which he released a twofer DVD of The Lodger/The Man Who Knew Too Much. Opening, ahem, closed a long time ago and Filmedia died in 2015, succeeded by Movinside the following year. But with no new releases since 2019, it looks like Davy’s latest endeavour has already bit the dust, having re-released only one of its four licensed Hitchcocks. Perhaps it’s for the best, as his Lady BD and DVD were subjected to aggressive DNR, leaving them with an overall waxy appearance devoid of grain and fine detail – yuck (screenshots). ‘Tis truly a pity, as they come in a lovely 32-page Digibook with a detailed essay, L’Odyssée d’un film : Une femme disparaît, by Marc Toulec. The only on-disc supplement is the unrestored original trailer in SD.

Meanwhile, presumably ESC Editions have now picked up the distribution rights; their BD supersedes Movinside with the same unmolested transfer as the US and UK, supplemented by a 10-minute introduction from documentarian Christophe Champclaux. As for the promised Spanish discs from Reel One, don’t hold your breath: it’s now been five years and counting since the first announcement, since when all’s gone quiet. All BDs to date have optional subtitles in their respective languages.

Of the remaining DVDs, the gorgeous, non-DNRed Filmedia (screenshots) has a French-language featurette (16min) on the first four spy-related entries in Hitch’s thriller sextet, which commenced with The Man Who Knew Too Much. It also uniquely boasts an excellent US documentary, The Men Who Made the Movies: Alfred Hitchcock (1973, 58min). Madman’s Oz disc has some decent extras: an audio commentary by film historian Brian McFarlane, the original trailer and an essay booklet. It’s perhaps the best PAL DVD overall but unfortunately long deleted and very rare, so well done if you can track down a copy. The Brazil has an hour’s worth of extras while the Polish is barebones.

This is easily one of Hitch’s most bootlegged British films but among the massed ranks of poor quality DVDs, beware of illicit BD-Rs hailing from Russia (Deval), Spain (Layons/JRB), Italy (Studio 4K) and Germany (Great Movies/WME). The latter’s BD and DVD have also been repackaged by “limited-edition” scammers Inked Pictures.

Odd fact: despite original theatrical trailers surviving for at least five of Hitch’s British films, only Lady has had hers properly released on home video. However, it’s unrestored and clearly had a rough ride, being badly worn and zoomed in, topped off with muffled audio. In fact, it’s pretty representative of the state of most of the film’s many bootlegs.

Courtesy of the invaluable Hitchcock Zone and Caps-holic. 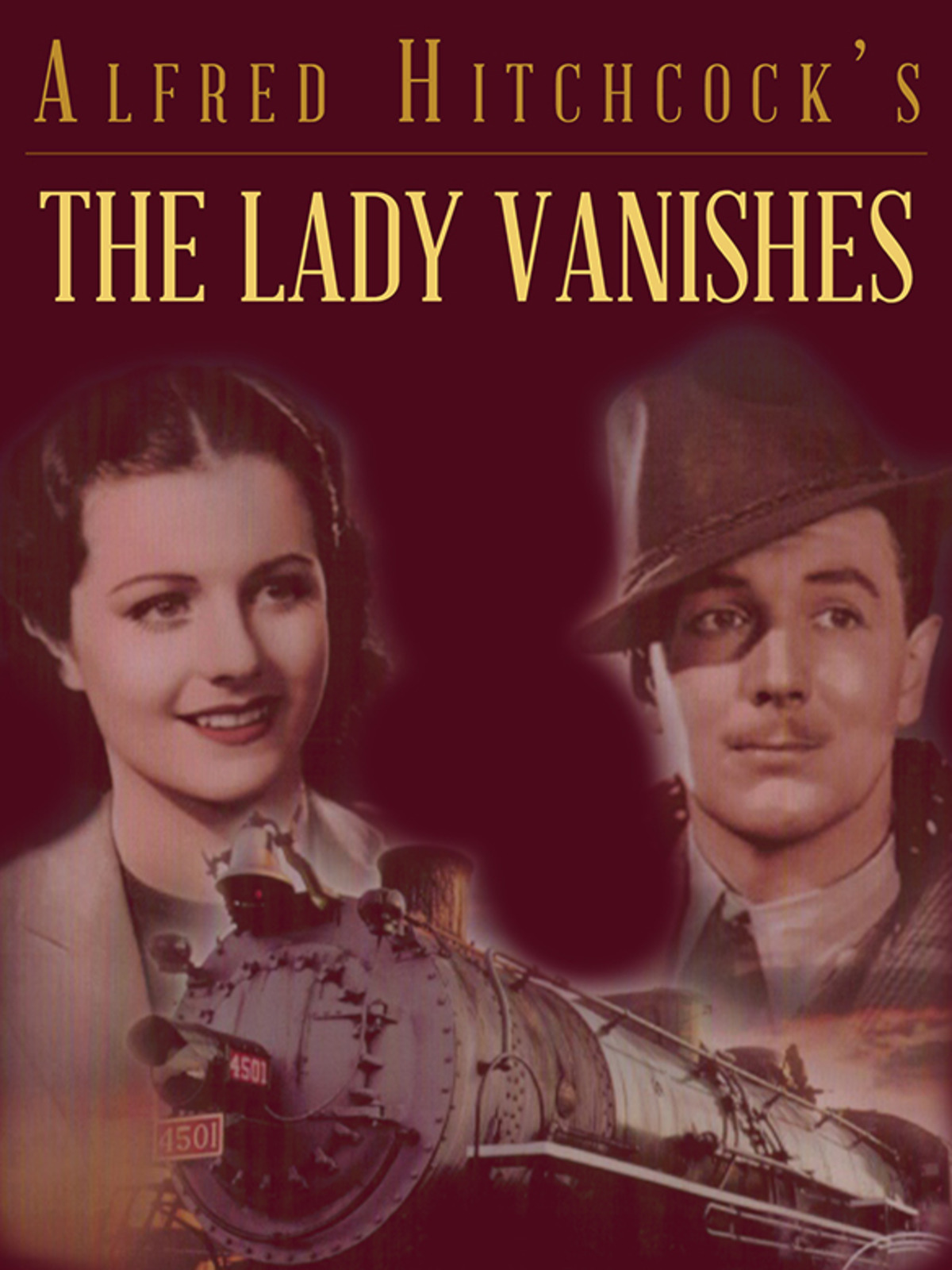 This artwork has appeared on various bootlegs, including UK and Scandinavian DVDs (Waterfall Home Entertainment/WHE); and Amazon Prime, Google Play and YouTube streams (The Orchard).