The 1920s–1940s really was the age of the train, as a plethora of quite similar mystery-thrillers, often with strong comedic elements, were made internationally during the period. Evidently, the concept of rail-bound locked-room mysteries was also a runaway success at the time; Hitch’s The Lady Vanishes may be the best known example of the genre but there are various other examples that are almost its equal. Hitch’s affinity for rail travel and the rich symbolism it engenders is well apparent throughout his career. Indeed, almost every other British film he made featured trains to a greater or lesser degree, most notably Number Seventeen, The 39 Steps and Secret Agent, culminating with The Lady Vanishes. Of course, his steel-wheeled love affair continued apace in the states, even finding its way into the title of Strangers on a Train. I’ve rounded up a few more examples, although to keep the list from getting too bloated have stuck to European films. But I welcome any other suggestions from the US or elsewhere. They might form the basis of a Part 6 but there are such a lot of them!

Note that despite the proliferation of DVD-Rs for most of these films, both obviously homemade and professionally pressed, none of them are in the public domain. They’re all under copyright and any releases not linked here are cheap bootlegs.

For more info on the subject, and many more examples, see John Huntley’s expansive Railways in the Cinema (1969) and Glyn Horton’s Guide to Britain’s Railways in Feature Films (2007/2009) which cover the period from the earliest silents up to their dates of publication. For a wider ranging take, guest author Rebecca Harrison’s From Steam to Screen: Cinema, the Railways and Modernity (2018) firmly sets railway films made between 1895 and 1948 within the British cinematic and cultural milieus that produced and consumed them.

Before we set off, I’ll sneak in a quick word for Night Mail (1935) an obscure British B-movie that has all the makings of being a little corker but it’s MIA. The BFI National Archive has no film materials on this train-bound murder-thriller; does anyone know of its whereabouts? Searching isn’t helped by its much better known namesake from the following year, the iconic documentary short Night Mail (1936). This ode to the golden age of the General Post Office (GPO) and British railways in general is notable for its “verse commentary” by renowned poet W. H. Auden. It’s been beautifully restored by the BFI, who’ve released it on a couple of UK discs alongside a cornucopia of relevant extras; just avoid the cheap US bootleg DVD-R from supposedly public domain outfit Video Yesteryear. 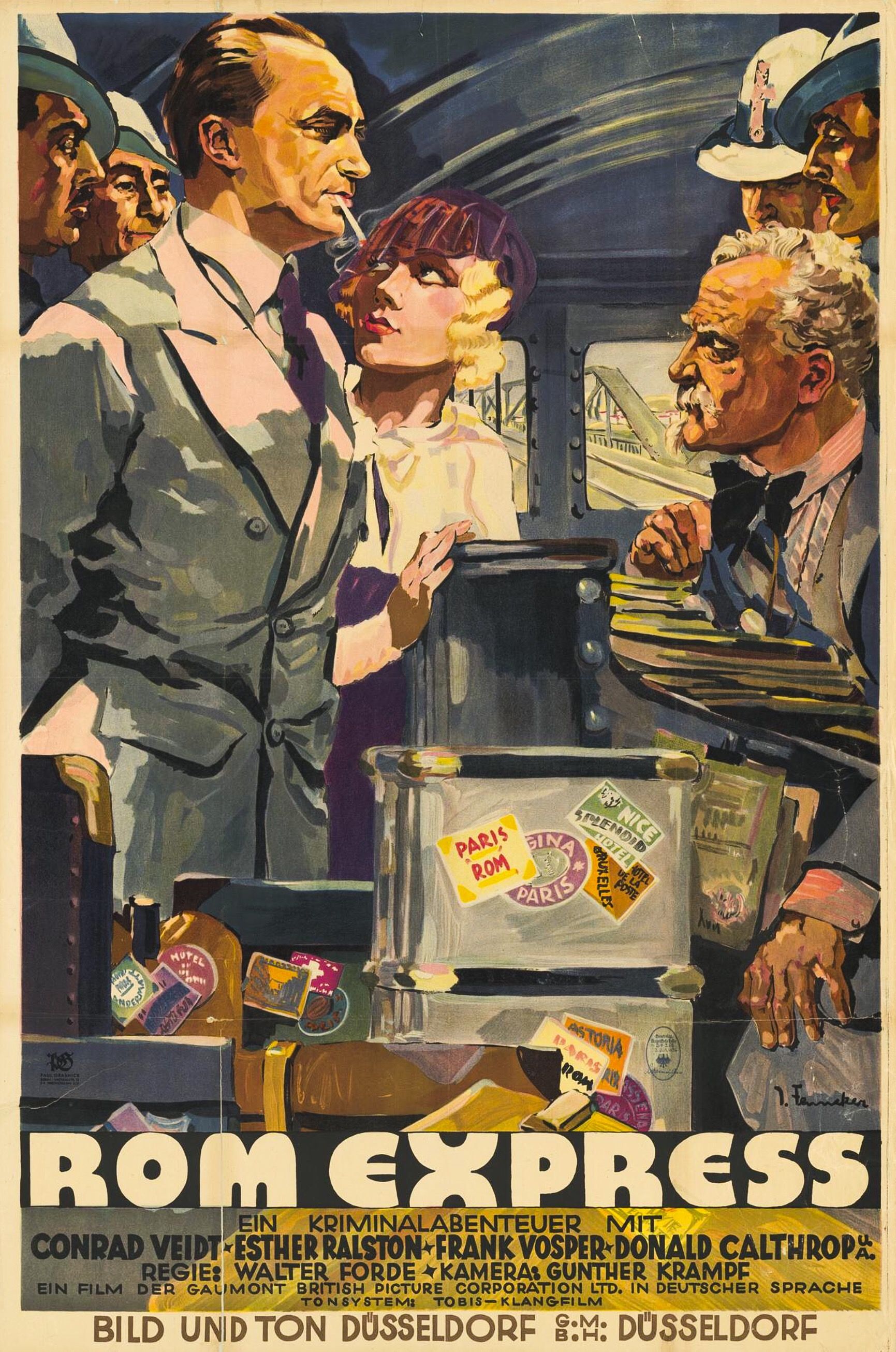 Unjustly forgotten British actor-director Walter Forde’s Rome Express has many strong connections to Lady, for which it’s something of a dry run, not least of which is a screenplay penned by Sidney Gilliat, later responsible for The Lady herself. He adapted it from Clifford Grey’s eponymous hit play and good old Ruth Alexander wrote a 1933 tie-in novelisation. It was also translated into Danish and published the same year as issue 42 of Ugebladets Filmsroman (Weekly Film Novel).

This was the first release for the prestigious new Gaumont-British Studios, soon to become the home of Hitch’s greatest British successes. G-B had wanted to announce their arrival with a bang and it certainly shows. Among a roster of top talent both in front and behind the camera, it features regular Hitch players Joan Barry, Donald Calthrop and Gordon Harker, who between them appeared in no fewer than 11 films for the Master of Suspense. Calthrop in particular drives the main plot, playing a similar character to that of Blackmail and once again pays the highest price for his transgressions.

Rome Express is an ensemble piece through and through but American import Esther Ralston received top billing, although this would prove to be one of her last starring roles. As the 1930s wore on, her star waned inexorably and she was cast in supporting or character parts for the rest of her career. Scottish character actor Finlay Currie takes the same role of MacBain the publicist in both this film and its remake, Sleeping Car to Trieste, though his first name changes from Sam to Alastair. But it’s the dependably brilliant German, soon-to-be émigré Conrad Veidt, with his air of languid menace, who effortlessly dominates every scene he appears in and raises the film several notches above expectation.

The BFI Archive holds a cache of nitrate copies of this film going right back to the original negative. What’s really needed is for some kindly soul to pony up for a full restoration but in the meantime, all we have is a worn but watchable, slightly contrasty transfer of a theatrical print that can be viewed online in the UK and has been released on a trio of discs: 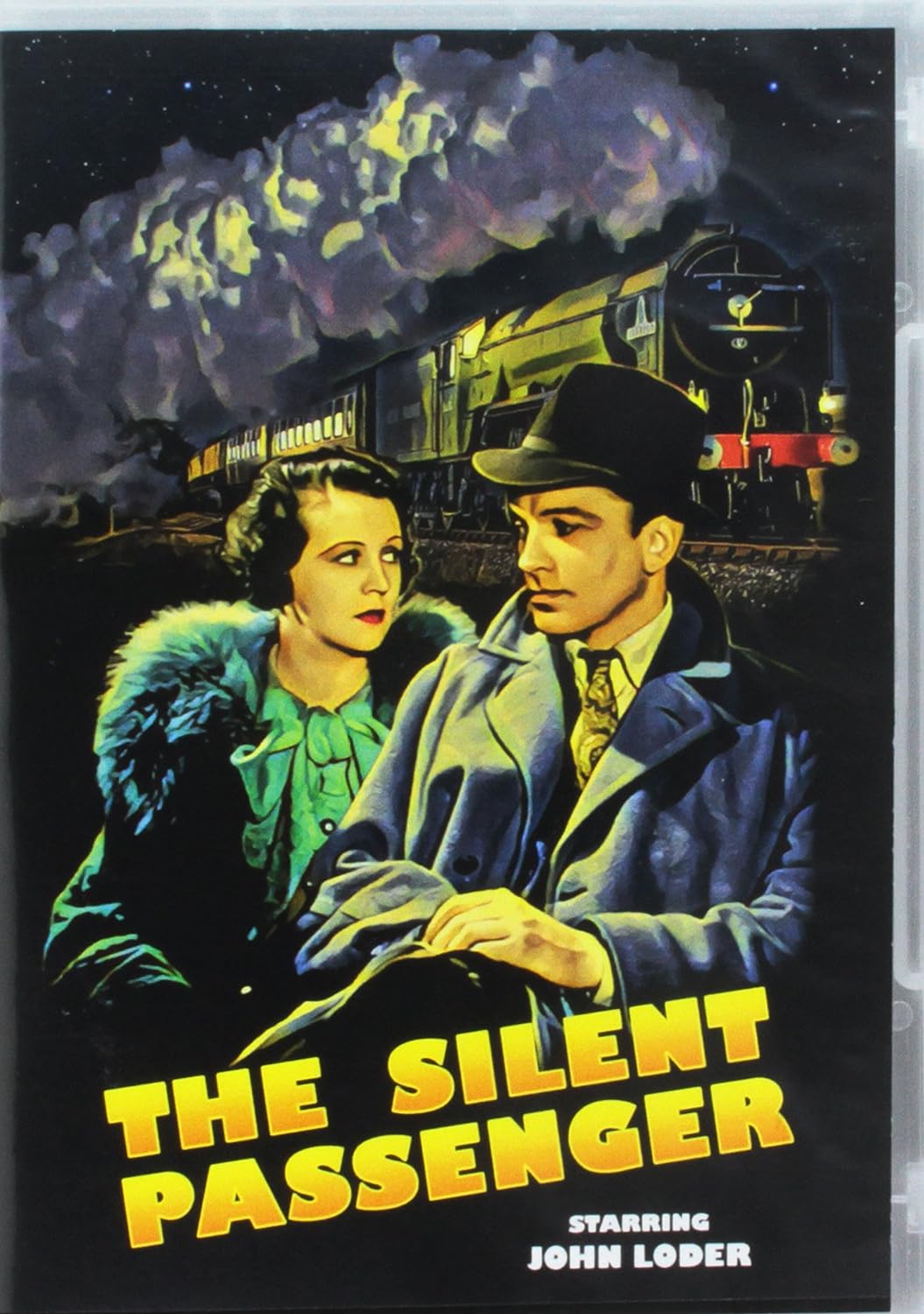 Despite its relatively modest budget, this quota quickie punches well above its weight and is thoroughly deserving of your time. It’s based on a still-unpublished original script by Dorothy L. Sayers, and Hitch regular John Loder chalks up another thriller, this time as the Wrong Man accused of murder. Unfortunately, there are no official, good quality releases as yet, though there are a trio of illicit US discs from Alpha Video, Reel Vault and Sinister Cinema. But their shared mediocre transfer is also on YouTube, so I suggest you catch it there until something better turns up. 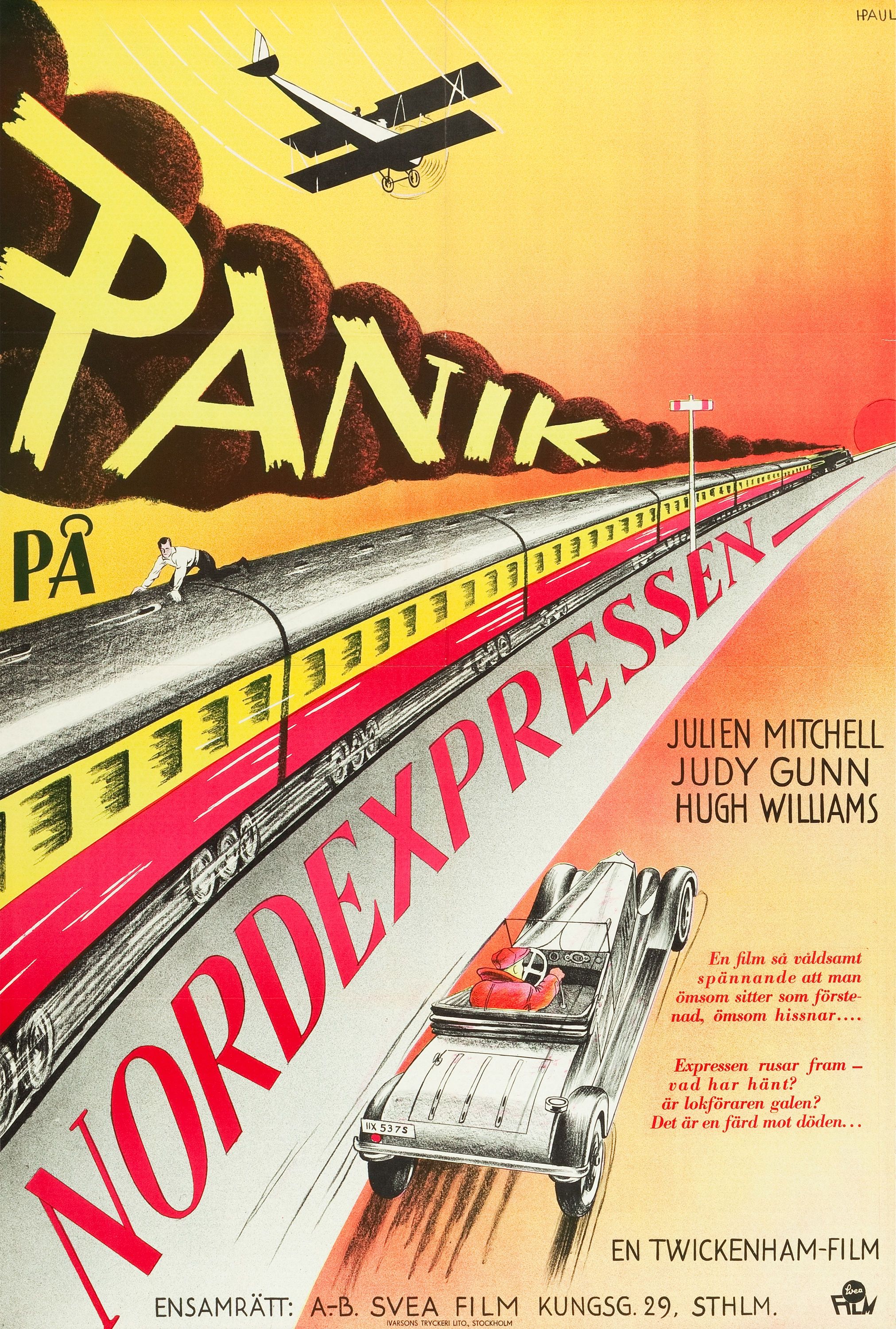 This quota quickie – one of the very best! – is a compressed gem that wastes no time in rushing to its final stop. The original story is by Joseph Jefferson Farjeon, author of the play on which Hitch’s runaway train-climaxing Number Seventeen is based. It stars none other than Godfrey “missing finger” Tearle of The 39 Steps fame but this time he’s on the side of the angels. Another Hitch link comes in the shape of Eve Gray, who came to a sticky end in The Lodger after arguing with her boyfriend. These are your options for getting onboard:

The Ghost Camera (1933) is another little cracker based on a story by Farjeon and thoroughly recommended. Among others, it features Henry Kendall, star of Hitch’s Rich and Strange, who’s joined by John Mills and a young Ida Lupino, and it’s edited by David Lean to boot. What are you waiting for? Just avoid the criminally bad US DVD-R from bootleggers Reel Vault.

As for Renown’s brilliant Vintage Transport in Film Collection, also included in its many jewels is perhaps the best quality release anywhere of top pre-Coder Danger Lights (1930), starring a young Jean Arthur (sigh). Another is the US train-bound B movie, Streamline Express (1935); think Grand Hotel (1932) on rails.

That’s all the Farjeon works to make it to both the big screen and home video but he also contributed additional dialogue to Michael Powell’s must-see thriller The Phantom Light (1935). It stars Hitch regulars Gordon Harker, Donald Calthrop and Ian Hunter, and can be seen for free in the UK at any BFI Mediatheque or via these releases:

This dynamic thrill ride, retitled Doomed Cargo in the US, is detailed separately here. 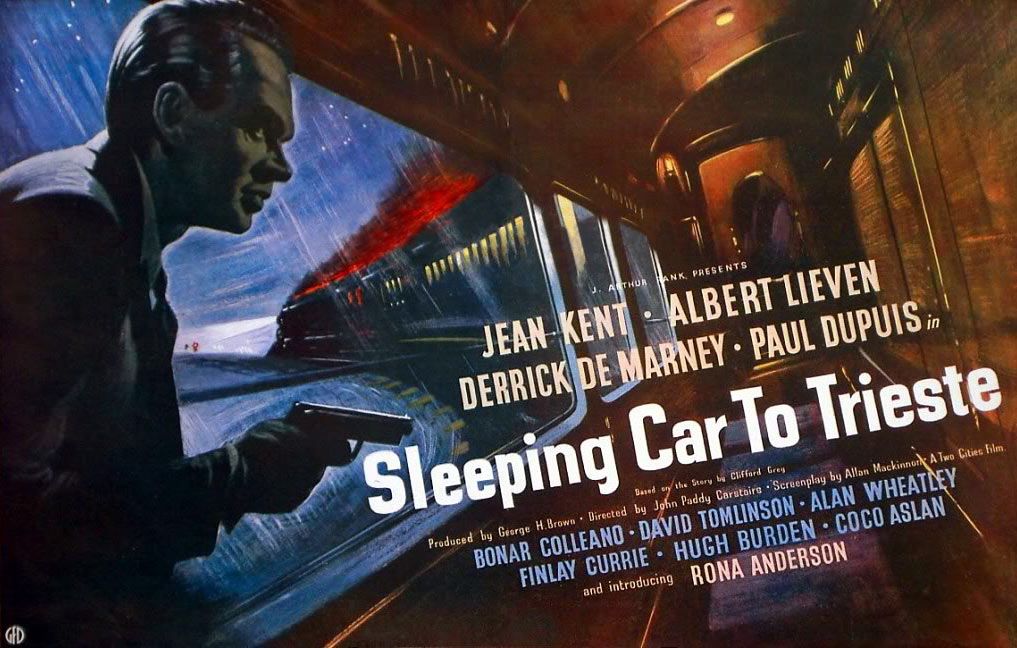 This is a retitled remake of Rome Express and in many ways equal to the original. Of particular note is that it co-stars Derrick De Marney, also co-lead of Hitch’s Young and Innocent. So far, its only official releases are a pair of lovely looking UK issues; avoid all the homemade DVD-Rs littering eBay et al., and a Spanish boot from Llamentol. 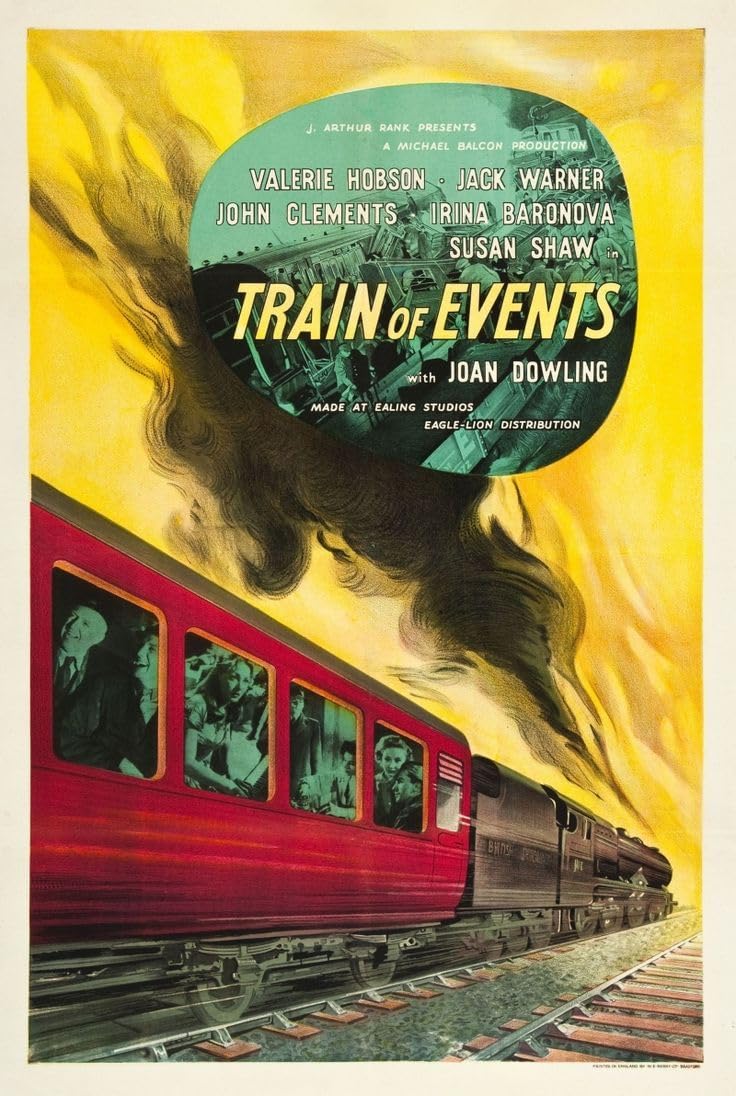 This one’s an absolute classic and well deserving of a full remaster and Blu-ray release. It could be a beautiful thing too, as various materials, including the original negative, are housed in the BFI Archive. The plot concerns the interweaved backstories of several passengers as they hurtle through the night towards their final destination. It bears many striking similarities to the equally great and strongly recommended Jessie Matthews starrer, Friday the Thirteenth (1933). This is the former’s only official release so far: 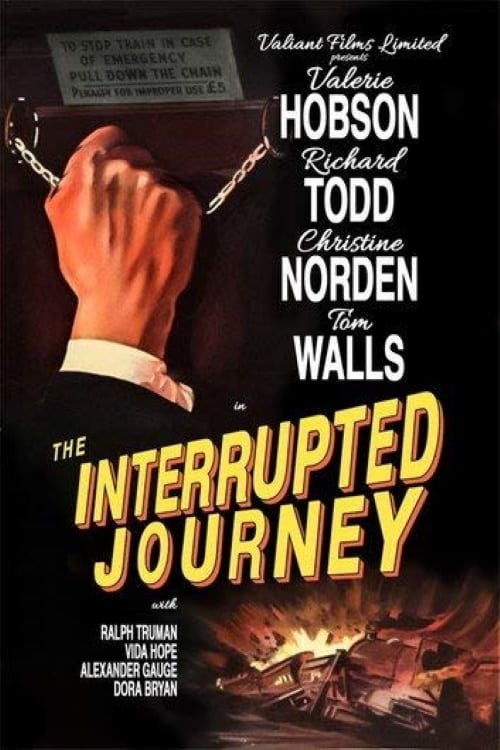 This British, ripped-from-the-headlines thriller has only one official, good quality release so far and surprisingly it’s from the states. But there are various VHS quality DVD-Rs from the UK and elsewhere, the most common of which uses the above poster artwork. Avoid too, similar low rent discs from prolific US and Spanish bootleggers Sinister Cinema and Llamentol/Resen respectively. 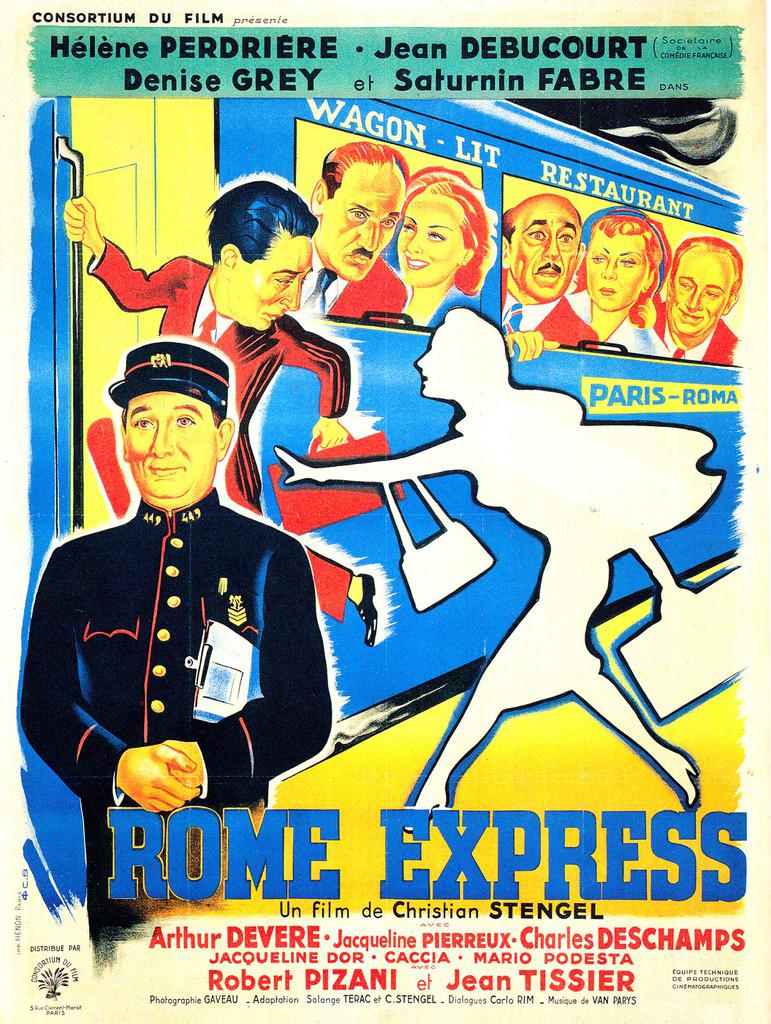 Aside from the title and setting, the French Rome Express is technically unrelated to its earlier namesake, but is clearly paying fond homage nonetheless. So far, it’s only been issued on a non-subtitled DVD.

Actor-writer Arnold Ridley’s creepy evergreen play and its spin-offs merit inclusion on this article as much as any of those above but there are so many screen versions I couldn’t fit them all in. Never fear: instead, they’ve been spun-off into a separate article that also includes his other available film adaptations for good measure.

Lastly, a quick mention for one of my favourite films that’s also both set on a train and a locked-room mystery: Sherlock Holmes and The Pearl of Death (1944). But I’ll be covering all the Basil Rathbone/Nigel Bruce Holmes films in great detail soon, so will link to it here then.

There’s an attempt at a master list on Wikipedia.