As stated previously, the copyright status of Alfred Hitchcock’s films is easily the most misunderstood area of his entire legacy. Especially of those from the first half of his near-60-year career. Though he’s one of the most studied and written-about filmmakers in history, only a scant few authors have skimmed over the subject. Even of those that have, their findings are completely incorrect or at best incomplete. Some even make the very same point about others’ inaccuracy while then going on to perpetuate more misinformation themselves!

As with most actual legislation, copyright law seems like some arcane branch of alchemy to most people. Many seem to believe that copyright is either perpetual or near-perpetual – often attributed to the actions of the Disney Corporation! – or else a lot shorter than it actually is. There is also often confusion over the copyright status of a work in different territories, especially if it is – or at any point was – public domain in the United States. Only a few authors get it right. Even the term “public domain” itself is open to misinterpretation. This article demystifies the concept of copyright in different jurisdictions, with specific reference to the films of Alfred Hitchcock.

The legislation in place when Hitchcock started working in films in the UK was the Copyright Act, 1911 (the “1911 Act”). This was actually an “Imperial Copyright,” applicable to all countries in the British Empire, and which was also voluntarily adopted by the Dominions of the Commonwealth. It was formulated in response to the UK becoming a signatory of the Berne Convention on copyright, which set minimum copyright terms for most works, and other related standards.

Under the 1911 Act still photographs – including those forming part of a film – were protected for 50 years from the end of the year in which the original negative was created, and in the first instance the copyright was owned by whoever owned the camera. In the context of film-making, that meant that the first owner of the copyright was whoever owned the film camera, which would invariably be the studio and/or producers of the film. If a camera was hired in for a specific project, there would need to be a clause in the associated contract transferring the ownership copyright – known as an “assignment” – to the studio/producers. Similarly, for on-set still photographs taken for continuity or publicity purposes, if the still camera was the property of the studio/producers, the copyright would also be theirs, but if the camera was owned by someone else, there would also have to be an appropriate written assignment.

In the first instance ownership of the copyright would be shared equally between all co-creators, although naturally in practice contracts would include the necessary assignments to the studio/producers.

Although not specifically stated in the legislation, it was widely accepted that co-creators in the case of narrative films were the credited director or co-directors, and writers or co-writers, including the writer or writers of any original source text (e.g. novel, play, etc.). Where one or more co-creators died before a film was released, the division of initial copyright ownership was not affected, but the 50-year posthumous term would only be based on those who were alive at the time the film was released.

These rules – as well as all subsequent legislative changes – applied to all of Hitchcock’s films, regardless of their place of production, with the exception of the French-language shorts Bon Voyage and Aventure Malgache, which will be dealt with separately later.

Had there been no subsequent change to UK copyright law, and the terms of the 1911 Act remained in force, Hitchcock’s films would have started progressively falling into the UK public domain at the end of 1981 – with The Manxman – until a final batch of 16 films at the end of 2030, those being where Hitchcock himself was the first co-creator to die, and no co-creator had lived beyond that year.

In the event, long before any of Hitchcock’s films could have fallen into the public domain under the terms of the 1911 Act, it was largely replaced by the Copyright Act, 1956 (the “1956 Act”). In this new legislation the term of posthumous copyright of a dramatic work was changed to run for 50 years from the end of the year in which the last co-author to die did so, and this applied retrospectively to all existing works created before it became law on 1 June 1957. Overnight this increased the terms of protection for almost all of Hitchcock’s films, meaning that the earliest that any of them would enter the UK public domain would be 2030 – based on Hitchcock’s own death – right through to the end of 2061 for Rope (1948), based on co-writer Arthur Laurents’s death in 2011. Only two films – The Ring (1927) and An Elastic Affair (1930) – were unaffected, and retained the same protection as under the 1911 Act, as Hitchcock was the sole credited writer and director on both.

The last change of relevance is that under the 1956 Act still photographs were instead protected for 50 years after the end of the year in which there were first published. This inadvertently resulted in unpublished photographs having an indeterminate – and possibly perpetual – term of protection. The first owner of the copyright in a photograph was also changed to whoever commissioned it.

Crucially, however, the new legislation on still photographs was not retrospective, and the Act specifically states that photographs created before it became law remained protected under the terms of the 1911 Act, i.e. creation plus 50 years and initially owned by the owner of the camera. In practical terms this mean that any photographs taken on or before 31 May 1957 would expire at the end of 2007 at the latest, whilst only those taken and published after that date where protected for publication plus 50 years, with those taken and unpublished having an indeterminate term.

A period of 45 years separated the 1911 and 1956 Acts, but the next major change in UK copyright legislation would only take another 32 years.

The Copyright, Designs and Patents Act 1988 (the “1988 Act”), as the name suggests, had a much wider scope than copyright alone. For dramatic works the term of protection remained as the last co-creator to die plus 50 years, but the composer of original music forming part of the work was now counted as a co-creator.

The vast majority of Hitchcock’s films were unaffected, but five had their terms extended on account of their composers being the last co-creator to die, these being Spellbound, Notorious, Topaz, Frenzy, and Family Plot. The latter is of particular note, in that John Williams is still alive, so the year in which the 1988 Act term would have expired is not yet known.

The idea of a film being protected as a physical object was retained, although the 50-year term was now calculated from the end of the year in which it was released, or if unreleased, the year it was made.

The Duration of Copyright and Rights in Performances Regulations 1995

The most recent change to UK copyright law was a Statutory Instrument – The Duration of Copyright and Rights in Performances Regulations 1995 (the “1995 SI”) – intended to harmonise most terms of protection across the European Union, which automatically bumped the 1988 Act’s 50-year posthumous terms to 70 years. Controversially, this included a provision to revive such 50-year copyrights that had previously expired. The scope for this to happen with films was extremely limited, given that few if any had expired between 1976 and 1995, but certainly the novels of some well-known authors were affected. Virginia Woolf, for example, had died in 1941, so the copyright on her published books had expired at the end of 1991, but the 1991 SI revived and extended it to the end of 2011 – an unexpected windfall for her heirs!

For films the expected copyright expiry dates were increased by two decades, meaning that Hitchcock’s will now not start falling into the UK public domain until the end of 2050 at the earliest, with the last being Family Plot some time after the end of 2088 at the earliest, for the reason already stated

Although not quite unique, Hitchcock’s works do include two rare exceptions to the foregoing in the form of his two French-language shorts – Bon Voyage and Aventure Malgache – commissioned during the Second World War by the Ministry of Information, which thus fell under Crown Copyright. Whilst earlier legislation was more generous to Crown Copyright, the 1988 Act sets it for dramatic works as 50 years from the end of the year in which a work was commercially “published,” a term that was not affected by the 1995 SI.

Neither film was released during the war and in fact were not made available to the public until being first sold on VHS by Milestone Films in the US and by Connoisseur/BFI in the UK in 1994. They were also first screened by BBC2 in September 1994. As these releases are recognised as publication for the purposes of British law, the films will enter the UK public domain after the end of 2044. 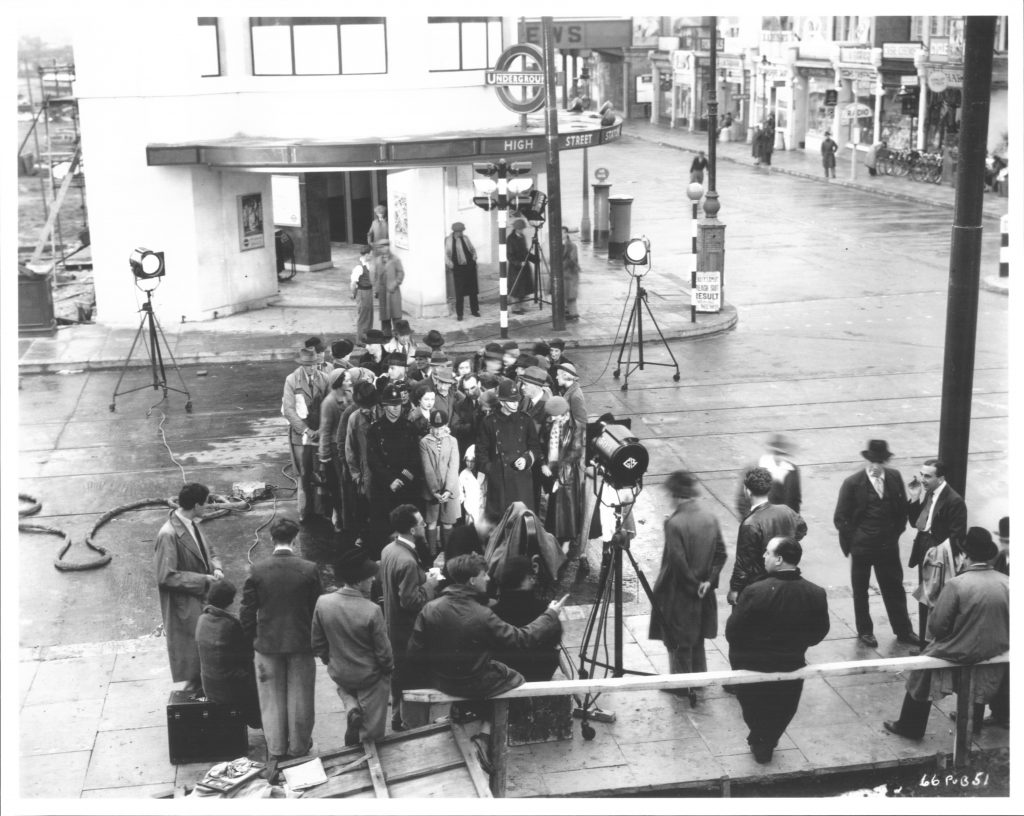 How to make a crowd seem bigger than it is in sunny Middlesex! Hitchcock (leaning on rail) directs a crowd scene for Sabotage (1936) on the Gaumont British lot at Eastcote Lane in Northolt. His wife Alma Reville and their daughter Pat can also be seen, standing between the two policemen flanking young Stevie. The UK copyright on this photograph expired at the end of 1986, but the final form of the contents of the film camera seen in it remain protected until the end of 2065 in the UK, and 2031 in the US.

[1] Generally, copyright commentary talks of “co-authors,” but this is obviously open to misinterpretation, so I use the broader “co-creators.”

I have a life-long fascination with the works of H.G. Wells, particularly his troubled film collaborations with Alexander Korda, reflected in my contributions to the Network DVD and Blu-ray releases of Things to Come (1936). This has led to a wider interest in 1930s British films, and in particular issues of preservation, availability, and – inevitably – copyright status. The social context of 1930s cinema overlaps somewhat with my work on the Home Front during the Second World War, via my books London Underground at War (2014) and City on Fire: Kingston upon Hull 1939–45 (2017). Tube Screen, an in-depth guide to the London Underground in film and television is due to be published in 2019, followed by a definitive account of the production and history of Things to Come.

An infinitesimally tiny quibble when set against what is otherwise a magnificent piece: the two French wartime shorts, Bon Voyage and Aventure Malgache, were actually first screened to the public in September 1993, courtesy of Hampstead’s Everyman Cinema. And I seem to recall (I was involved with this presentation and the accompanying early Hitchcock season) that the BFI told us with regard to whether or not we could legitimately market them as Hitchcock premieres that only one of them was actually a public premiere, although annoyingly I’ve forgotten which one. So presumably “publication” should date from 1993 – or, potentially… Read more »