Regarding Hitch’s bootlegged talkies, if you should pick up any from countries where English isn’t the primary language, it’s pot luck as to what audio you’ll get. You may be lucky enough to get the original, albeit in rotten quality, even unsynchronised, or you may be stuck with an amateurish dub done for some ancient edited TV broadcast, a VHS-sourced copy of which you’re now blessed with enduring. Right now, I have here by me a very smart-looking Polish box set of British talkies which, aside from the lack of copyright info immediately giving it away as a boot, is every bit as beautifully  designed as any Hitch release I’ve seen, legit or otherwise. However, even if I was willing to overlook the awful, muddy, scratched and jumpy transfers housed on its immaculate picture discs, there’s the question of the audio. It’s in the original English alright – but drowned out by a terrible voice-over; some gruff, bored-sounding Polish geezer actually narrating his translations a few seconds after each person begins speaking. It sounds like he’s doing it on the fly and at a distorted volume twice as loud as the original soundtrack, to boot (pun intended). It’s so poorly done, you can almost hear the tape recorder clicking on and off as he waits for someone to speak. Of course, he’s doing all the voices himself: male and female, young and old alike, in the same grinding monotone. Can you imagine what that does to the original overlapping, whipcrack-sharp dialogue? Kills it all stone dead, that’s what. Yes, I can follow what’s actually happening this way, but there’s no joy in it whatsoever. Quite the opposite, in fact. I can’t dismiss his efforts 100% though, as I have no idea as to the accuracy of his translation. I’m afraid my Polish just isn’t up to it.

So why do they abuse the Master this way? I’m glad you asked. Firstly: cost, as it’s a quick ‘n’ dirty way to make releases foreign language-friendly, and cheaper than subtitling. Another reason for this clumsy method is that film and TV content is always provided to licensees with the original soundtrack. In the absence of an appropriate dub for foreign markets, a discrete music and effects-only track, sans dialogue, is also often provided where possible, sometimes along with a transcript. The dialogue is then translated and a local dub recorded to overlay the music/effects track. Of course, Hitch’s bootleggers don’t have access to discrete audio tracks or anything of that ilk, so the best they can do is lift old dubs from inferior sources or simply get someone to shout all over the original audio. Nice.

As is so often the case, thieves in Italy and Spain were the first to produce boot Hitch BD-Rs; now they’ve been joined by Germany. At present, official BDs have only been released in the US, UK, France and just three from Divisa in Spain, for Downhill, Jamaica Inn and Foreign Correspondent. Italian Hitch BD-R bootleg labels include Enjoy Movies and Studio 4K, while Spanish ones are Feel Films, IDA Films, Layons Multimedia, New Line Films, Producciones JRB, Resen, Vértice Cine and others. 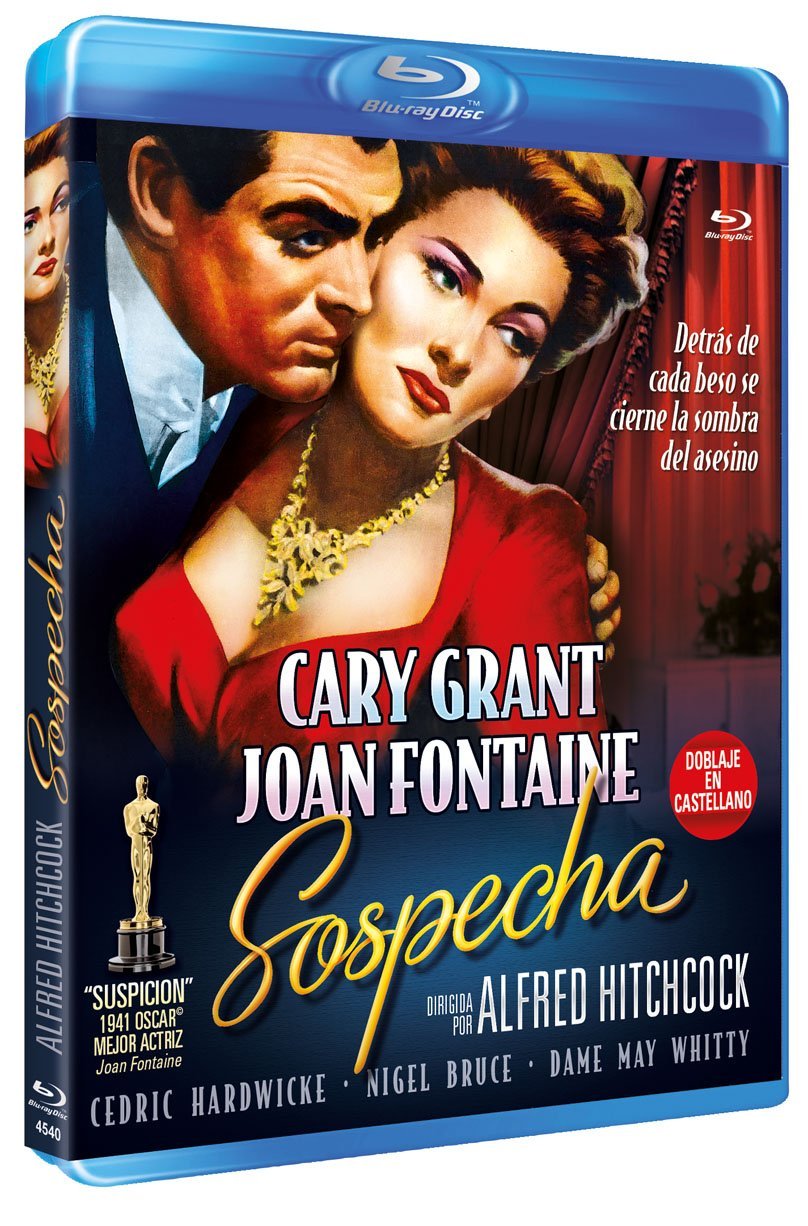 It’s more than Suspicion: this is definitely a bootleg and prolific thieves Resen are the culprits. There is a legit Spanish BD but it’s courtesy of Warner Bros., not these shysters.

Incidentally, if you are in the market for a little HD Suspicion, the only legit BDs are identical but differently packaged discs hailing from the US (also on streaming), UK and the aforementioned Spain. There’s also an entry from Japan, which like the others  is region free, so will play anywhere.

Let’s spotlight a prolific German outfit who are pretty typical of the larger operations churning out bootlegs. They’re one of many in that country with a special affinity for preying on Hitch’s catalogue and are the first to produce domestic Hitch boot BDs. Just their Hitch discs alone are published under many different label names, most likely as a smokescreen. Those confirmed include: Best Entertainment, Crest Movies, daredo, Delta Music & Entert., div, Edel Germany, Great Movies, Indigo, Intergroove (likely the parent label), Polarfilm, Soulfood, White Pearl Movies, Power Station, WME Home-Entertainment and others. Coincidentally, they’re also affiliated with the attractive German boots described earlier. Their DVDs cram on up to four films per per disc, making for an appallingly low bitrate. Some include other, completely unrelated films, like the genuinely PD Carnival of Souls (1962). Even their single-film BDs are in much lower quality than the official versions, with several containing standard definition material passed off as HD. Even on one of their ‘better’ discs, for Spellbound (Ich kämpfe um dich, 1945), its stars are horizontally squashed and waxy on the German pirate compared to the far superior official US Criterion disc: Ingrid: De | US; Gregory: De | US. Other discs featuring restored transfer ripped from official releases naturally lop off the copyright and restoration credits in a weak attempt to hide their source.

They’ve also littered paid streaming services like Amazon Video with their ripped-off versions but they’re far from the only ones. I haven’t covered streaming piracy in detail here but among the innumerable individual uploads all over the internet, especially on YouTube – the worst of the worst enablers, many corporate thieves, such as Echelon Studios and The Orchard Enterprises also operate. Yup: these cheeky sods have found ever more ways to charge unwitting punters for the ordeal of enduring their substandard quality Hitchcocks and much, much more besides.

Hitchcock 1926-1946 German bootleg BDs all from the same company, the variously named Great Movies/Indigo/WME Home-Entertainment, etc – they just can’t make their minds up.

Foreign bootlegs do commonly include local subtitles and occasionally an additional local dub. However, sub translations are usually very poor, while dubs are lo-fi and frequently incomplete, being lifted from VHS tapes and recordings of edited old TV broadcasts. However, not even these minimal efforts apply to the German releases in question. Their BD, DVD and digital versions alike are all completely vanilla, subtitle and extras-free efforts. Even among cost-cutting bootleggers this level of cheapness is almost unprecedented for foreign releases of English-language films (and French, in the case of Hitch’s two wartime shorts).  In at least one case, despite being listed on the sleeve, the original English-language track has been omitted altogether! Some of them have even been edited specifically to conform to their incomplete dubs. Unbelievable.

All films on The Lodger and Downhill BDs are B&W, losing their original tinting, and run at PAL speed, making their transfer origins especially questionable. Many films are inexplicably renamed, for instance Secret Agent, originally released there as Geheimagent (1936) becomes Der Spion. Meanwhile, The Paradine Case, known in its only legit German release to date by the direct translation Der Fall Paradin, on their bootleg DVD is now Schuldig oder nicht schuldig? (Guilty or Not Guilty?). Still others claim to feature Der Mann, der zuviel wusste aka The Man Who Knew Too Much 1956 remake, but instead have the 1934 version. The latter film’s single DVD boot (also here) has a shot of its star, Peter Lorre, in M (1931) on the rear: right actor, wrong film. Similarly, the rear sleeve of this Spanish boot BD-R of The Lodger has swiped artwork from this US boot DVD of The Lodger and Murder! I hardly need tell you the latter film isn’t actually even on the Spanish disc. We can play this game all day; here’s a doozy: Jamaica Inn, starring Charles Laughton and Maureen O’Hara, on this DVD (also here) has a cover pic of Laughton and Carole Lombard in 1940’s They Knew What They Wanted! I could go on – and on – but I think you get the idea. In short, bootlegs and pirates are not only put together by thieves, but stupid ones, who have no idea what they’re doing. Don’t fall for their woefully substandard rubbish.

Again, for The Paradine Case, here’s the German-friendly real thing: 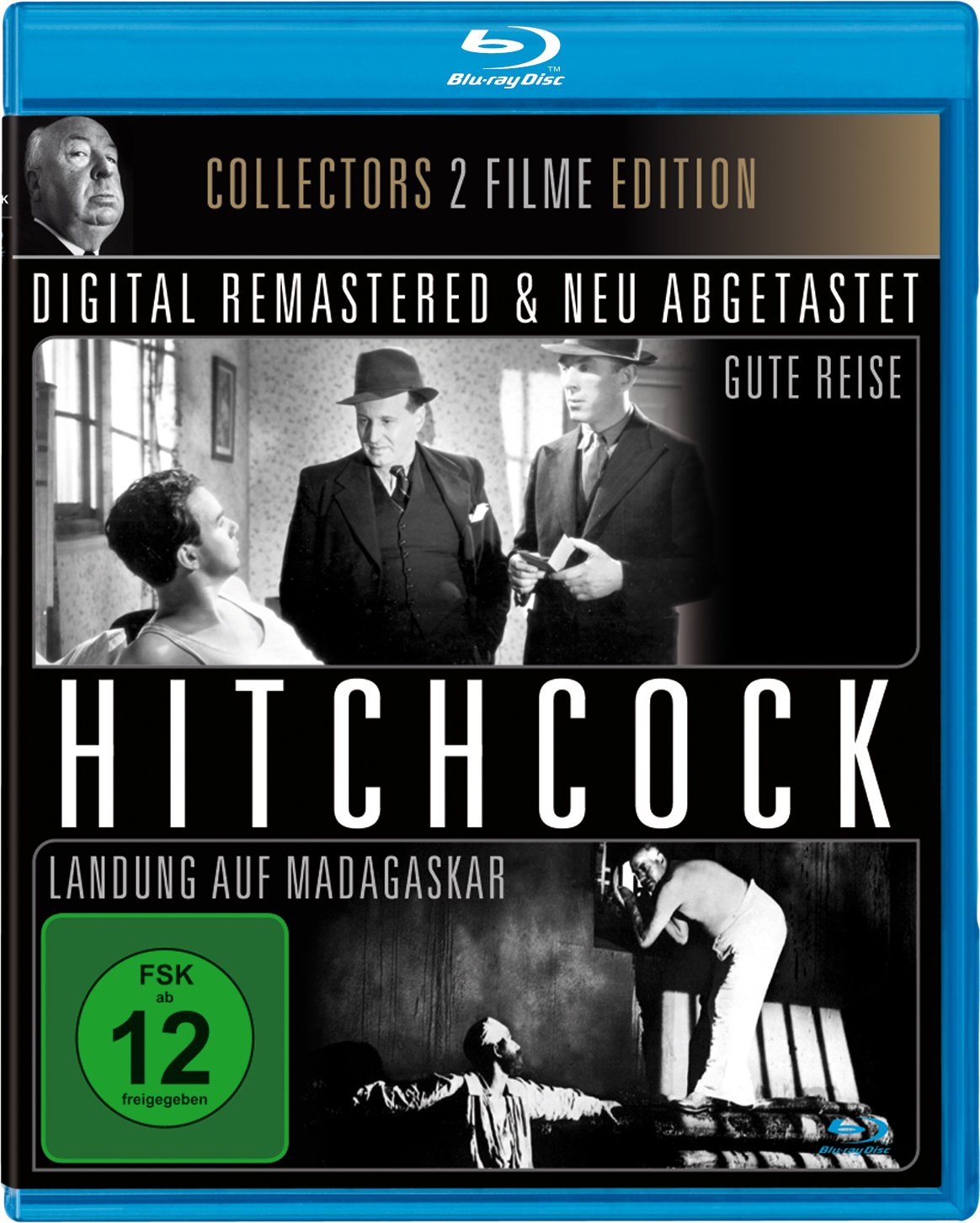 You little star. Not. This German Great Movies BD has Hitch’s wartime shorts, Bon Voyage and Aventure Malgache, in their original French only and with no subs whatsoever. The icing on the cake? It’s in particularly poor standard definition. You’d be far better off with any of the licensed, subtitled releases listed here.

Surprisingly, many of the German knock-offs, along with myriad others, have been reviewed on numerous otherwise-credible home video sites, not one of which has picked up on the fact they’re plugging illicit copies. Such naïvety only aids bootleggers in general: the internet is a truly wondrous, democratic arena where everyone has a voice. Unfortunately, all too often that also applies to the ill-informed and those who are wilfully ignorant. They speak authoritatively, having done no research and often presenting pure opinion as fact, even when faced with incontrovertible evidence to the contrary. Meanwhile, others spout similar nonsense on social media, in chat forums and sundry other places. Such endorsements, along with being sold by trusted, established outlets like Amazon and eBay, only lend the rip-offs both credibility and respectability. 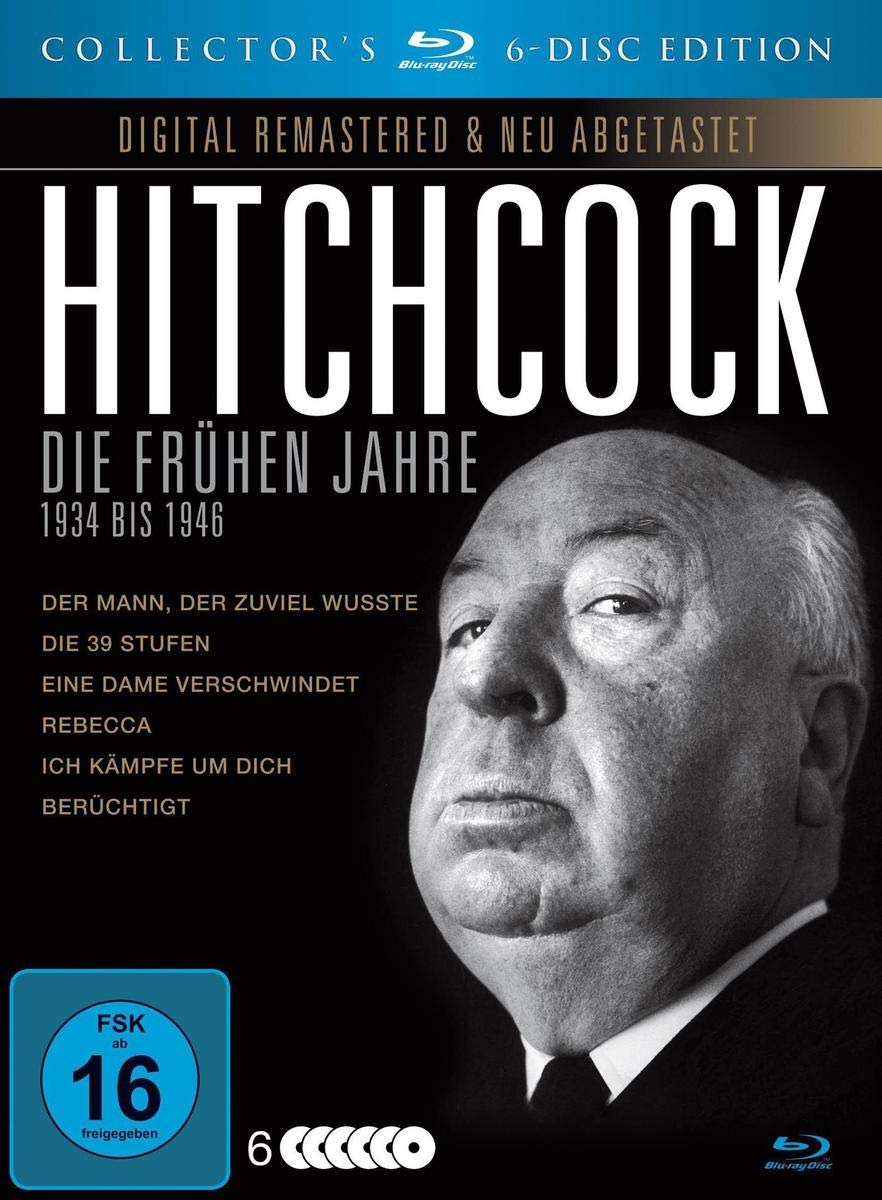 Of course, rather than buy licensed releases you could always go online and stream or download copies of many of these films for free. But again, as with Charlie Chaplin, you’re more likely than not to end up watching ones that are, to put it mildly, of sub-optimal A/V quality and completeness. Added to their other shortcomings is the quality of the discs themselves. Of course, the cheapest low quality blanks are always used and a recurring issue with all boots, especially Hitch’s, is that they frequently skip or freeze, or won’t even play at all. Granted, not all boots are terrible quality: sometimes they’re copied (at lower bitrates) directly from regular releases and visually at least, are often virtually indistinguishable in quality – albeit minus any extras, original language subtitles, etc. Technically, those are classified as pirates or counterfeits, as well as bootlegs.

If you happen to already own any Hitch boots, bin them or give them to someone you dislike and treat yourself to the pleasure of seeing the films transferred properly. I can’t stress it enough: everywhere you look, the number of good quality, official releases is relatively small, as opposed to the countless shoddy knock-offs outnumbering them many, many times over. Granted, the bootlegs are usually ridiculously cheap to buy. But crap, no matter how cheaply it’s sold for, is still crap. Ultimately, bootleg buyers are really cheating themselves. Not only that, but very often the quality versions can often be had for the same or little more cost anyway. The choice, unlike the bootlegs themselves, is always clear.

It’s easy to spot bootlegs of Hitch’s British films and others. Avoid if they’re not listed here:

For more tips on spotting counterfeits in general, see:

Beware of Pirates! How to Avoid Bootleg Blu-rays and DVDs

The last word goes to our old friends Resen, who have unwittingly – and half-wittingly – given us a pirate of pirates: 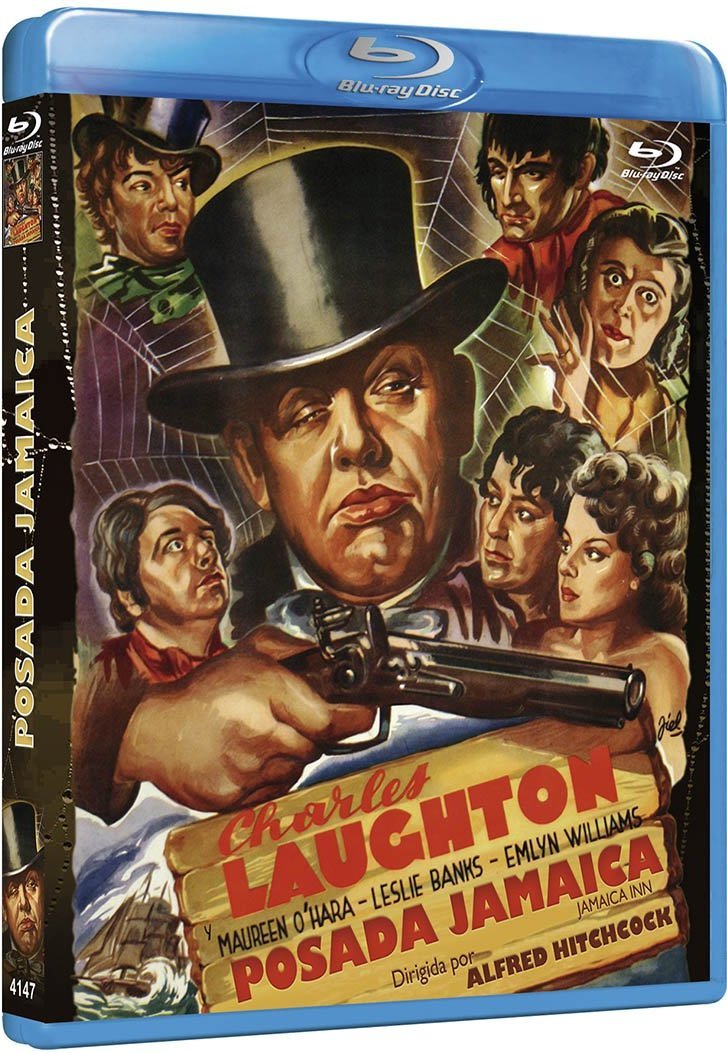 How ironic. If you need a Spanish-friendly version of Jamaica Inn, here’s the real thing.