The culmination of work he began in the 1970s, David Shepard’s restored Essanays made their digital début via his two-volume Chaplin Lost and Found: Essanay LaserDiscs (1988). The following year, to commemorate Chaplin’s centenary, he performed additional work on the Mutuals and commissioned custom ‘orchestral’ synthesizer scores by Michael Mortilla. The fruits of their labours were released as a LaserDisc box set, The Chaplin Mutuals (1991).

In 1995 Shepard remastered and extensively overhauled both sets of films; these new Mutuals were initially issued in the US by Image on LaserDisc (1995) and later alongside the revamped Essanays on region 0/NTSC DVD. The Essanays were supplied with either a piano score by Eric James (1913–2006) or orchestral score by Robert Israel, while Michael Mortilla expanded on and re-recorded his previous scores for the Mutuals. All the Image DVDs were then collected into a 7-disc box set, Short Comedy Classics: The Complete Restored Essanay & Mutual Collection. The seventh disc features a great documentary, Chaplin’s Goliath: In Search of Scotland’s Forgotten Star (1996, 52min). It focuses on the too-short life of Eric Campbell (1880–1917), who played opposite Chaplin as the heavy throughout his Mutual period.

Shepard chose to sequence the Mutuals with Mortilla’s re-recorded scores as three continuous, non-chronological programmes titled the Charlie Chaplin Festival, Carnival and Cavalcade respectively, as per their 1938 Van Bueren reissues. These are the versions issued in all other countries except for the UK. There, Shepard’s restorations had some missing snippets added by film historian Kevin Brownlow from BFI Archive materials, then were given new orchestral scores by Carl Davis. The BFI DVDs present the films separately and in chronological order, though due to a mix-up the first six are on Volume 2 and the second six on Volume 1. Check out these comparative screenshots.xxx 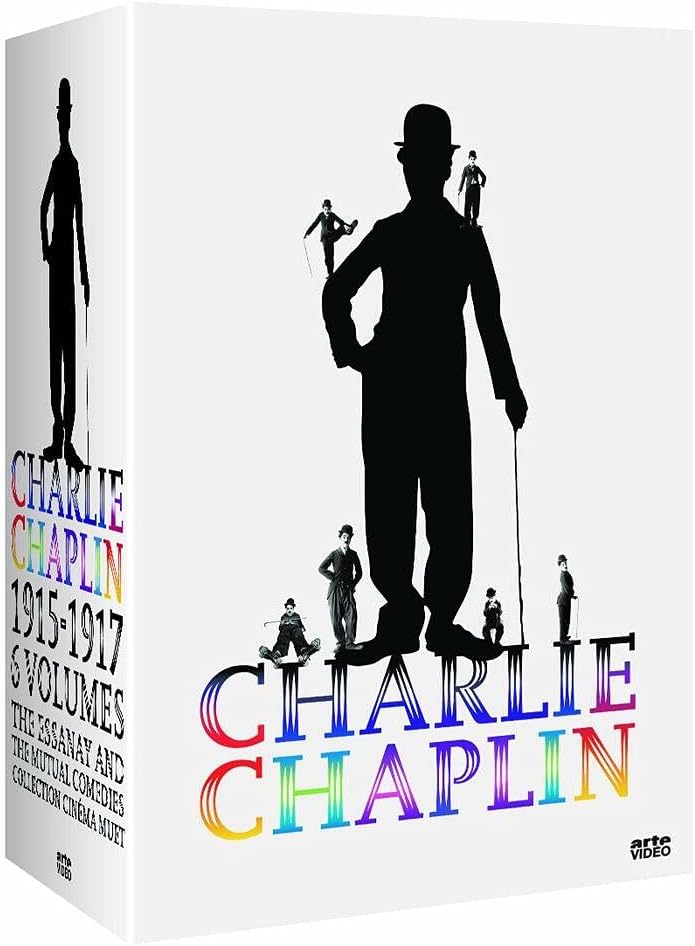 These are all known DVDs featuring the first round of restorations:

The US sets are faultless and though lacking in extras have the overall best audio and video, and will play anywhere. Meanwhile, all the European DVDs mark a rare lapse in quality for their usually assiduous labels, being somewhat compromised with unconverted NTSC-PAL transfers. The UK Essanay DVDs are further compromised by having their stereo soundtracks folded down to mono, but all four UK volumes do have some extras, albeit fairly minor. The French, German and and Dutch discs are identical, with French and German subtitles, as well as English for their bonus 39-minute French-language Chaplin documentary. They round out the extras by adding an associated short on each disc. All the mainland Euro box sets are pretty equal but long-deleted and expensive, bar the French issue, which is still cheap almost everywhere, making it the best choice overall. That’s unless you crave the BFI Mutuals’ Carl Davis scores, which though here are uniquely in both 2.0 stereo and 5.1 surround, can be had in 2.0 stereo on other more recently restored releases anyway – like those below and in Part 6.

Of the main Western European countries, Italy is conspicuous by its absence in the above line-up. That’s because our old friends Ermitage pirated these versions, with forced Italian subs and ersatz scores, along with similar treatment from some outfit called Azzurra Music. Both sets of DVDs have effectively killed the demand for legit releases there until the present day. Well done.

German DVD set. This is a 6-disc fold-out Digipak enclosed in a slipcase; the identical French and Dutch sets above were also issued in very similar packaging.

Some of these versions have also appeared elsewhere:

There’s just one other restored Essanay worthy of special mention: producer/director Don McGlynn’s unique but controversial reconstruction of Police (1916, 35min), included as part of The Chaplin Puzzle documentary (Denmark 1992). Some think it erroneously includes footage meant for Chaplin’s abandoned first feature, Life. This disputedly includes the orphaned flophouse sequence from contemporary cut ‘n’ paste cash-in, Triple Trouble. David Shepard was given an executive producer credit, under protest, as he supplied the materials. DS: “It would be my guess that as he so often did, Chaplin developed the sequence in TT (perhaps for Life), shelved it, revised it, and started over again on the same sets for Police.” However, many Chaplin fans and scholars swear by McGlynn’s Puzzle and Police, and believe they get closer to Chaplin’s original intent for the film than any other version. My advice is to check out both versions if you can and make up your own mind.

Both short and documentary are only available on a bonus disc in the now largely redundant 6-DVD box set, Charlie Chaplin: 57 Classics (2004), and as a single Czech DVD (2009). Also, they share a lovely – and definitely uncontroversial – score by Søren Hyldgaard which is available on CD.

David Shepard eventually carried out even further restoration, building on Kevin Brownlow’s improvements to his 1995 versions. The results were released in the US as a 4-DVD box set, The Chaplin Mutual Comedies: 90th Anniversary Edition (Image 2006). Packaged as two keep cases inside a cardboard slipcase, it features the previous Carl Davis orchestral scores and two substantial booklets. Discs 3 and 4 contain two documentaries: The Gentleman Tramp (1975) and the aforementioned Chaplin’s Goliath. Note this set was later reissued in a single case, minus the slipcase and booklets, so be careful which version you buy. Shepard goes into detail about all his work on the Mutuals to date in this 2006 interview.

Two of these versions have also been released elsewhere, including on BD, encoded in 1080i HD:

Essanays and Mutuals in print

As previously stated, many Chaplin film books published prior to the great restorations of the last decade or two are badly outdated. Though to a slightly lesser degree, this fate does sadly befall Ted Okuda and David Maska’s otherwise still-excellent CC at Keystone and Essanay: Dawn of the Tramp (2005). Any chance of an update, guys? A brilliant, evocative first-person account of life behind the scenes at the Chaplin studio is rendered in CC’s Red Letter Days: At Work with the Comic Genius (2017, Kindle). It’s edited by film historian David James and annotated by leading Chaplin expert, renowned veteran stage performer and magician Dan Kamin. Between them, they authoritatively fill in the background behind Chaplin stock company actor Fred Goodwins’ lengthy and detailed account, completely forgotten since its original 1916 publication in the British Red Letter magazine. The book also includes three further Red Letter articles detailing Chaplin’s February 1916 trip to sign his record breaking Mutual contract…

As for those, if you wish to know more about the most important set of comedy shorts ever made, look no further than the superlative Chaplin’s Vintage Year: The History of the Mutual-Chaplin Specials (2014, Kindle and unabridged CD) by Michael J. Hayde, and Chaplin at Mutual: A Centenary Celebration (2017) by Brian J. Robb.

Grateful thanks to David Shepard (1940–2017) for his help with this article. And a life well-lived, in pursuit of preserving our past and spreading love, joy and laughter.