Let’s all play in The Pleasure Garden

In 2012, the British Film Institute’s digital restoration of all Hitchcock’s silent films was announced amid a welter of fanfare and news headlines. Ever since, they’ve been screened with new scores worldwide to great acclaim. But so far only a disappointing few are available on home video. The reasons for this are many and varied, but there are ongoing efforts behind the scenes to finally bring the rest to physical and streaming media. Let’s begin with the Master’s début; Daniel Patrick Cohen, composer of The Pleasure Garden’s new score, fills us in…

Carmelita Geraghty and friends, restored to their original beauty in The Pleasure Garden

Restoring all nine surviving Hitchcock silent films was the largest project of its kind ever carried out by The British Film Institute. Of these nine films, The Pleasure Garden underwent by far the biggest transformation, with the restoration team working on surviving prints from the Netherlands, the UK and the US to reconstruct Hitchcock’s vision exactly as he originally intended. Before the restoration, the film was a hazy relic, only of interest to die-hard Hitchcock fans. Now it is a taut melodrama and, more importantly, it is clearly a blueprint for the medium-defining masterpieces that followed.

How the BFI gave Hitchcock’s The Pleasure Garden its rhythm back – Henry K. Miller, The Guardian 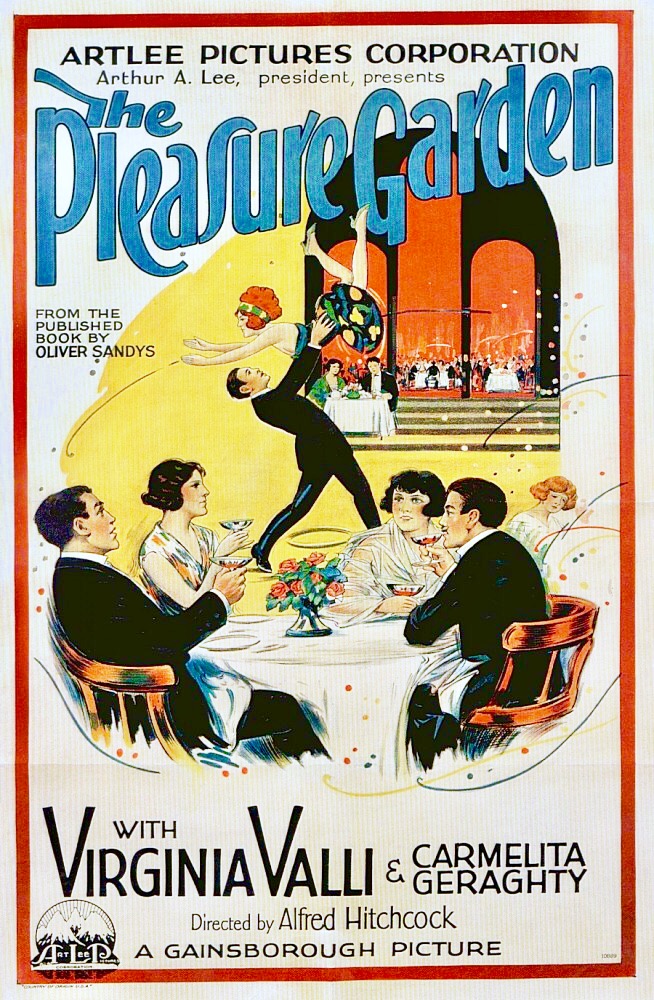 In Christmas 2004, I spotted in the RadioTimes (which has a cameo appearance in The Pleasure Garden) that three Hitchcock films were showing that day. They were The Lady Vanishes, The 39 Steps and North by Northwest. I said to my father that I’d never seen a Hitchcock film before, and he practically jumped out of his chair. “You’ve got so much to look forward to,” he said enigmatically. What an understatement that was. Right from the first establishing model shot in The Lady Vanishes (this shot was rubbished in reviews I read, I always thought it was captivating) to the outrageously silly train-into-a-tunnel visual pun at the end of North by Northwest, this was love at first sight. A year or so later, there was a specific moment: listening to Hermann’s title theme for the latter film on an MP3 player at Leicester Square underground station, that I decided that music, specifically film music, was my calling in life. And it was to that end that I began studying at the Royal Academy of Music in 2006.

Fast forward half a decade. I receive a text message from my former professor of Composition, Christopher Austin: which composers do I think would be worth approaching about writing scores for the British Film Institute’s Rescue the Hitchcock 9 project? I had to let the question sink in. Which composers do I think would be worth approaching? I, Daniel Patrick Cohen, lifelong Hitchcock obsessive and desperate-for-a-break young composer? Well, I responded, you should look for someone who is passionate about cinema and passionate about Hitchcock, who will really fall in love with the films. The conversation continued and after all sorts of names were mentioned, finally the message came that he was going to put my name forward.

After a lot of tense waiting, and having secured funding from PRS for Music, the commission went ahead, and I began the 90-minute contemporary score for chamber ensemble to accompany the restored film. It was my first commission for a work of this scale, and my first feature film score. As you may imagine, the opportunity to work with one of the masters of the medium, without any artistic limitation or intervention, was a rare and irresistible treat for a composer fascinated by cinema. The process of writing a contemporary soundtrack for a film that was of a different era was both a challenge and a delight.

The brief afforded a unique opportunity for exploring diegesis, I found that with a silent score there were a spectrum of possibilities in between sourcing the music in the film and having the music exist as a voice in a character’s head. I was keen to draw on a wealth of sources of musical inspiration from the years that intervened between film and soundtrack, and devised a line-up of duplicitous pairs of instruments which, I like to think, Hitchcock would have appreciated:

All of these instruments had been invented at the time of The Pleasure Garden‘s release (if you are kind enough to permit the vibraphone, which was developed in 1927).

As part of the Transilvania International Film Festival, the score is performed at the mysterious Bonțida Bánffy Castle, 26 May 2018. Photo: Marius Mariș

The lucky people who attended these performances are the only ones in the world to have seen Hitchcock’s first film in all its newly orchestrated glory:

5,000 people sit in the cool sea breeze on Copacabana beach in Rio de Janeiro, watching an open-air screening of The Pleasure Garden with its new live score, 4 Oct 2012

This has been, and continues to be, an extraordinary experience, but we are still seeking the holy grail. The new version of the film must, we feel, be made accessible to the general public. When we uploaded a lo-res trailer for the restoration to YouTube in advance of its first screening in 2012, there were immediately calls for a general release:

The most recent performance of the score at Transilvania International Film Festival was with Notes & Ties Orchestra under the baton of Christopher Austin, an internationally renowned conductor who has worked many times in Eastern Europe and has a list of film soundtrack recordings to his name.

Considering that these musicians have performed the score together already, I have utmost confidence that there is an absolute guarantee of the highest artistic standard for the recording. Their existing familiarity with the music also reduces the amount of studio time we will require and helps to keep the budget relatively low.

We intend to record the score in Radio Hall Cluj, a venue with a rich history of its own. It was actually constructed by the German tech giant Siemens, which is surprising considering that Romania was under Soviet control at the time. It holds the impressive record of being the first building specifically designed for radio broadcast in Europe, and is a perfect fit for this project.

A budget of €30k is sought to enable us to proceed. With the financing in place, we could start planning the recording sessions immediately. A detailed breakdown is available upon request.

There are some perks. Contributors to the budget will be:

If you can help in any way with this funding proposal, please contact:

With the soundtrack recorded, the film will be released worldwide on Blu-ray, DVD and major digital platforms, by Network Distributing under license from ITV, and in cinemas with distribution partners Park Circus. A TV release may arise from the latter, and it is notable that some national stations have already expressed interest in broadcasting it.

Considering the effect that the Hitchcock-Herrmann partnership had on me aged 16, the decisive point leading me to pursue a career as a film composer, the debt I owe to Hitchcock is impossible to overstate. This quest is my effort to ensure that this superb early film, by a hungry young artist who went on to become one of cinema’s great auteurs, gets the reputation it deserves.

Any upcoming worldwide screenings, with an improvised piano accompaniment unless stated otherwise, are listed here. You can read much more about the background and tortuous home video history of the film here:

Mean Miles Mander gets down to no good with poor Virginia… the Displeasure Garden?

Daniel is a British composer based in Romania. After graduating from the Royal Academy of Music in 2010, he was commissioned to score Alfred Hitchcock’s first silent feature film as part of the BFI’s Rescue the Hitchcock 9 project, with funding from PRS. In 2015, Daniel released The Passenger, an album inspired by a David Lynch quote about Barry Adamson's Oedipus Schmoedipus being "like hearing Hitch’s films in your head."
More recently Daniel was commissioned to write Reciprocity, a song cycle based on poems by Canadian poet Darya Farha, which was performed in London and in Canada at the Ottawa-based music festival Chamberfest. He has given talks on his approach to film music in England, Ukraine, Kazakhstan and Romania, and continues to compose soundtracks for arthouse film. Daniel is also currently working on a second album, due for release in 2021, and intends to produce more albums than there are Stanley Kubrick films.

This article was written two years ago. What’s the current status of funding? Also, have you considered a Kickstarter or GoFundMe campaign, or perhaps working with Criterion for US distribution?

The best-case scenario would be a single backer putting up the whole amount. After that it gets a little complicated, but both the options you mentioned – and others – are currently being considered. More news as soon as we have it!

It astonishes me that Kino Lorber, who has released a number of Hitchcock’s early films including “The Ring”, “Champagne”, “The Farmer’s Wife” (to name a few), would not want bragging rights to having released his very FIRST film. If Criterion doesn’t pick it up, I’m sure Kino will eventually. I also have to say, Daniel, that I really love what I heard of your score – it deserves a release of it’s own.