A spectacular new exhibition has permanently changed our view of the birth of cinema as we know it and of the men responsible – the brothers Auguste and Louis Lumière. If you are now too late to rush to Paris (it closes on 14th June) don’t despair: the show is already in demand from museums around the world, and eventually it will all go home to the Institut Lumière in Lyon, which – under its president, film director Bertrand Tavernier, and director Thierry Frémaux (a man of phenomenal energy and charm, who also directs the Cannes Film Festival) – conceived and produced the exhibition, “Lumière! Le Cinéma inventé”.

The setting for the show is auspicious – the Salon d’Honneur of the Grand Palais, the monumental exhibition hall abutting the Champs Elysées and built for the Universal Exposition of 1900. One of the first images that confronts the exhibition visitor is the Lumières’ own 115-year-old film of the glittering, just-finished Palais. From that beginning the exhibition traces the story of the Lumières, and the century and a quarter of motion picture film that they bequeathed – which must now finally give way to the new age of digital technologies (which the Lumières themselves would undoubtedly have embraced with enthusiasm and mastery). The first shock is that the brothers were so young. We are accustomed to the familiar images of two stout and heavily whiskered old savants peering through microscopes. But when the Cinématographe was perfected, in the first months of 1895, Auguste was 32 and Louis only 30. They were already veterans however: when Louis filed the first of his innumerable patents it had to be in his father’s name since, at 19, he was still a minor. An image on the exhibition poster shows Auguste obligingly leaping in the air for a publicity shot to demonstrate the speed of Lumière photographic plates: cover the mature moustache and the bright eyes of a handsome young man challenge you.

They were the heirs to a 19th century industrial success story. Their father Antoine was born in 1840, orphaned by the cholera at 14, and at 15 apprenticed to a sign painter. He took classes in art, was attracted by photography, and in 1870 took his family to Lyon, where he established a modest photographic studio. The studio grew in reputation and importance, while Antoine’s two eldest sons passionately pursued their education. In 1881, at 17 and 19, the boys had developed a form of dry plate which was to found the fortunes of the factory which Antoine established the following year – initially fearful that his over-extension could bring ruin. On the contrary, success was assured by Louis’ development of the famous Blue Label photographic plates, which were to dominate the market for the next 60 years. Within eight years the factory employed 190 people, and Antoine was able to build a grandiose 30-room house at La Ciotat, where the family had a pleasure steamboat which was to figure in some of their films. The Lumières by this time were local and national celebrities. Auguste and Louis Lumière playfully posing for an Autochrome, c. 1906

Antoine began to leave things to his sons and take life more easily. On a trip to Paris he seems to have seen the Edison Kinetoscope, and urged his sons to research animated photographs. Edison – or his assistant William Kennedy Dixon – had perfected the mechanism of motion picture film by 1892, but had resisted the final step of projecting the images on a screen: they miscalculated that there was more profit to be reaped from showing the films in coin-operated peepshows for individual viewers.

An alternative version of the story is that it was Auguste who was inspired by seeing the Kinetoscope in Paris, and had already sketched out some ideas. It was however Louis who finally devised the machine during a sleepless night during which he was tormented by his constitutional headaches. In Auguste’s words, “My brother, in one night, had just invented the Cinématographe”. The machine he had conceived was impeccable in its mechanical austerity and versatility – the same device served to expose and print the film and also to project it. Louis was the last of a line of inventors and researchers – Londe, Marey, Muybridge, Demeny, Rudge, Le Prince, Edison, Dickson – but the Cinématographe was the culmination. Though Louis was apparently the sole inventor, the patent filed on 30th March 1895 was in both brothers’ names: to the end they remained faithful to a promise they had sworn in 1877, at 13 and 15, never to separate, but to work together all their lives. This remarkable fraternal solidarity went further: in February 1893 Louis married Rose Wincker and the following August Auguste married her sister Marguerite, while sister Mélinie-Juliette Lumière married brother Jules Winckler. This was no ordinary family.

The exhibition finally destroys one of the most-cited platitudes of film history – the definition of Lumière as an industrialist who simply aimed his camera at the documentary reality around him – in contrast to Georges Méliès as the cinema’s first artist, using film creatively and demonstrating its dramatic potential by allying it with other theatrical media. Thierry Frémaux and his collaborators definitively disprove this misapprehension. The Cinématographe introduced the basic technology that was not to change essentially until the digital revolution. But it also marked the beginning of the art of ciema. In Frémaux’ words, “Louis Lumière is the last of the inventors but also the first of the cineastes.”

Lumière’s strategy to launch his invention is still breathtaking in its imaginative concept and scale, and could only have been possible for a powerful industrialist. He went outside Lyon to contract with a first-class instrument maker, Carpentier of rue Delambre, Paris, to supply 425 Cinématographes. A hundred cinematographers were engaged (mostly from the Lyon area) and trained to use the device. They were to include some cameramen – Alexandre Promio, Félix Mesguich and the Moroccan Gabriel Veyre – whose names are still revered by their successors. These men were then despatched across the world, throughout Europe, Latin America, the Far East, where they demonstrated, exhibited and marketed the Cinématographe at the same time as they energetically filmed the life and scenery of the exotic places they visited. Between 1895 and 1905 the Lumières issued 1422 films, most of less than one minute’s length. The major part have survived, to bequeath an unparalleled living panorama of the world as the 19th century gave way to the 20th. The general quality is consistent enough to show Lumière’s success in passing on his own skills, learned from his years working with still photography. Above all the films reveal the essential skill asserted by all the great film makers of the classic era: knowing where to put the camera. From the very beginning, the framing is right. One of the most famous of the earliest Lumiére films, Arrival of a Train at La Ciotat (1895) – which was said to scare the audience out of their seats as the train rolled towards them, uses the diagonal with total skill. In its single shot, the world’s first film comedy, Watering the Gardener (1895), is perfect in its mise-en-scène, faultlessly timed to fit its 50-second length. True, the challenge of containing sometimes unpredictable action within the standard 18 metres of film occasionally defeated the cameramen. Yet Lumière and his cameramen unselfconsciously explored the expressive possibilities of their new visual medium. From the start they used close-ups and long-shots as selectively as they had done in stills photography. In 1896 Alexandre Promio famously filmed the first panoramic travelling shot when he filmed from a boat in the Grand Canal of Venice. A beautiful travelling shot from a moving vehicle celebrates the streets of Lyon in 1896, and there is a dramatic panorama from a speeding train. These pioneers already had the eyes of film makers. And many of the heritage of films have still to be explored. The Institut Lumiére are about to issue a Blu-Ray of 150 restored films – a small but welcome beginning. 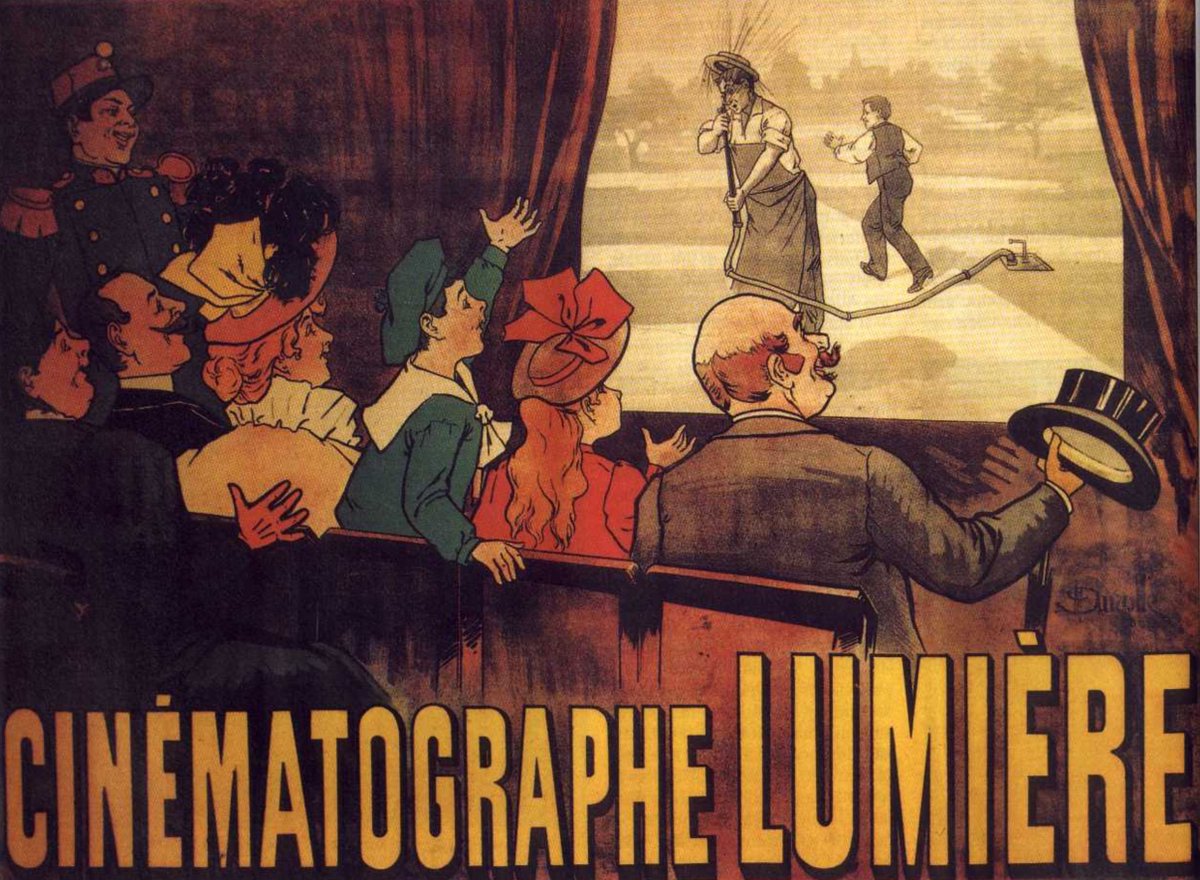 The Grand Palais exhibition is a worthy, dazzling tribute. Apart from the displays of apparatus, documents and personal memorabilia, a vast screen assembles hundreds of the films in action in tiny screens, while there is a miniature representation of the 1902 Photorama, a 360-degree photographic panorama. And there is a reminder that the Cinématographe was only one part of the Lumieres’ achievement. Auguste was always more drawn to medicine, while for Louis motion pictures were only a temporary distraction from his great work on colour photography. His Autochrome was the first viable commercially available colour process, and his own colour photographs on display in the exhibition have an artistry that recalls the world of Renoir.

As a footnote – How could they have had the luck to have a name as apt as Lumiére – the French word for “Light”? The name is said to come from distant times when it was applied to the warden charged with extinguishing the candles on the chapel altar.

The also fortuitously-named L’Eden Théâtre, in La Ciotat, was the site of some of the Lumières’ very first public screenings, making it the oldest cinema in existence. You can read here about its recent rescue and restoration.

David Robinson has been a stalwart of the international film scene for longer than most people. He was successively film critic of the Financial Times and The Times and director of the Edinburgh Film Festival (1989–91). He was also director of the Pordenone Silent Film Festival (Le Giornate del Cinema Muto) for 18 years, from 1997–2015, and now holds the position of Director Emeritus. His many books include Chaplin: His Life and Art (1985, 1992, 2001), adapted for the script of Sir Richard Attenborough’s biopic Chaplin (1992), starring Robert Downey Jr. He was also the historical consultant and on-set advisor on the film and can be seen, heavily disguised, in three cameo roles. His latest book, Footlights with the World of Limelight (2014), is currently appearing in ten foreign language versions. Wikipedia | IMDb