News: Numerous screenings and events are marking the centenary of Nosferatu’s Berlin première on 4 march 1922. Drop me a line and I’ll temporarily add any here.

America’s National Public Radio just aired a short piece featuring two friends and contributors to this series  of articles, and yours truly:

Try as she might, Bram Stoker’s widow couldn’t kill Nosferatu

Those great folks at Eureka have also rolled out a coffin-cartload of UK screenings for Carl Theodor Dreyer’s landmark Danish horror Vampyr (1932), coinciding with their limited edition Masters of Cinema Blu-ray of its new 2022 restoration.

July 2021: collectible poster specialists Under the Floorboards have this great new Nosferatu print for sale! 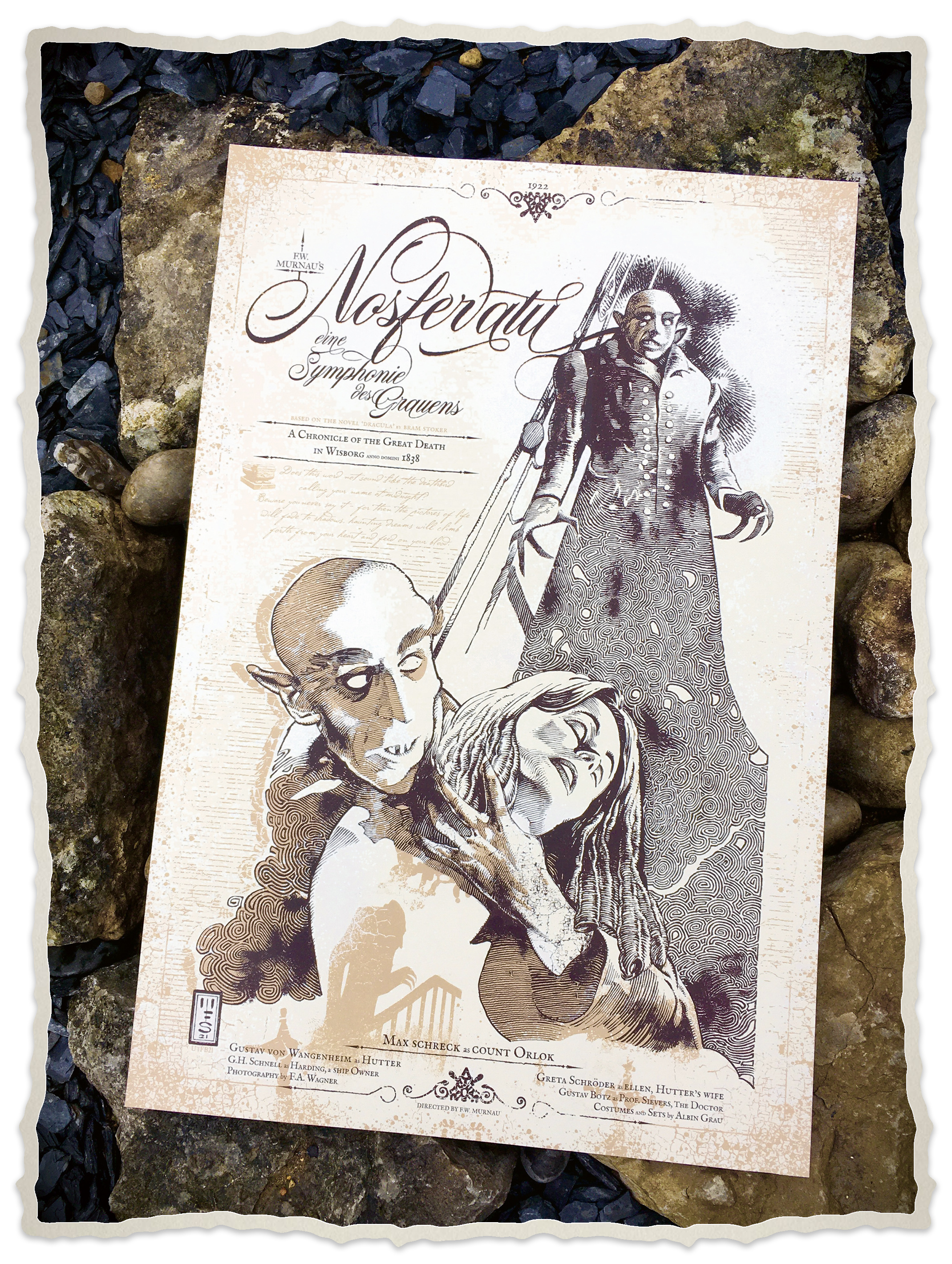 Genesis of a Vampire

“Nosferatu – Does this word not sound to thee like the midnight call of the Bird of Death? Take care in saying it, otherwise the images of life will fade to shadows, and ghostly dreams will rise from your heart and nourish themselves on your blood.”

Pay heed, weary traveller: this is the first of an in-depth series of articles covering everything Graf Orlok and best read sequentially.

“Ahh, there you are. Won’t you please come in? Don’t be frightened, child. If you’re sitting comfortably, I shall begin…”

When it comes to home video releases, Nosferatu rises time after time. You just can’t keep a bad Count down. Its latest resurrection in HD, courtesy of the British Film Institute (BFI), is their second kick at the can. They’ve updated their 2002 DVD but the film’s already very well served, both on DVD and Blu-ray – so was it worth it? If you can’t wait to find out, fly to my Blu-ray reviews. But we have all night until the cock crows, so why rush? Before getting to that, let’s consider the following:

Nosferatu (1922), alongside The Phantom of the Opera (1925) and Metropolis (1927), is foremost among the ‘warhorses’ of silent cinema. That is say, out of all silent films in circulation today it is one of the most…

As Lady Macbeth might say, “Yet who would have thought the old man to have had so much blood in him?”

Nosferatu is the first true vampire film and though they both share the same source, it predates Dracula (1931) by nearly a decade. It’s a loose, unauthorised adaptation of the classic 1897 novel by Bram Stoker (1847–1912) and the first – and last – release by fledgling German outfit Prana-Film. At the helm was 6’11” (210 cm) tall, ex-World War I fighter pilot Friedrich Wilhelm ‘F. W.’ Murnau. Using unauthorised source material was nothing new for him: his earlier horror, Der Janus-Kopf (The Head of Janus, 1920), was an adaptation of Robert Louis Stevenson’s novel The Strange Case of Dr. Jekyll and Mr. Hyde. Regardless, Murnau was already well on his way to becoming one of the best regarded directors of the silent era. Following Nosferatu he fashioned further masterpieces like The Last Laugh (1924); Faust (1926) and Sunrise: A Song of Two Humans (1927), a winner of several awards at the first Oscars. Tragically, when only 42 years old and at the peak of his powers, Murnau died in a car accident shortly after completing his final film, Tabu (1931).

Though often overlooked in favour of Murnau, the real key player in the film’s creation was co-producer and production designer Albin Grau (1884–1971). He co-founded Prana-Film with businessman Enrico Dieckmann, initiated the project and appointed all the creative roles, including Murnau himself, and enlisted noted fellow filmmaker and occultist Henrik Galeen (1881–1949) to pen the screenplay. Galeen’s shooting script, with annotations by Murnau, can be read here and here. As well as being a talented artist and architect, Grau was a lifelong follower of the occult and responsible for the look and feel of the entire project. He designed the sets and costumes and drew all the storyboards, posters and other promotional artwork. He even even wrote the occult symbol-laden letter seen in the film itself and executed the fine intertitle calligraphy. Phew. Though the film will always be synonymous with Murnau, it is undoubtedly Grau who casts the longest shadow over Nosferatu.

The titular character himself was perfectly embodied by seasoned actor Max Schreck (1879–1936), whose name literally translates as “greatest fright” – you couldn’t make it up! Though he had many other stage and screen roles, he’s chiefly known nowadays for his turn as the creepy Count. Certainly the sheer brilliance of Nosferatu was no accident: many of the people involved both behind and in front of the camera went on to make some of the most enduring screen successes of Weimar era Germany. Nosferatu has been long acknowledged by critics and historians as an Expressionist masterpiece, alongside the likes of The Cabinet of Dr. Caligari (1920) and the aforementioned Metropolis. Now approaching its first century, the adventures of Orlok continue to be revered by critics and academics everywhere, and enjoyed by film fans alike.

Land of the undead: filming locations

Filming took place over three months between July–October 1921, when most of the actors, including Schreck, who were stage regulars, were on their summer break. All the interiors were built by Albin Grau at Jofa-Atelier studios, Berlin-Johannisthal. For the exteriors, rather than go to the trouble and expense of travelling over 1,000 miles to the real former Transylvania, now part of Romania, Murnau and his crew shot much closer to home. Neighbouring Slovakia doubled for „das Land der Diebe und Gespenster“ (“the land of thieves and ghosts”), with Orava Castle providing the setting for Orlok’s lair. The north German cities of Lübeck and Wismar stood in for Wisborg; the former’s Salzspeicher (salt warehouses) gave Orlok the perfect vantage point from which to spy on Ellen. Nosferatu expert Martin H. Larsen recently travelled to all three places and posted two sets of fascinating then-and-now photographs: Nosferatour 2014 – Lübeck and Wismar and Nosferatour 2015 – Slovakia. Also recommended are Martin Votruba’s excellent webpages about the Slovakian locations, here and here. There’s also this 2017 Orava Castle video tour with excellent then-and-now footage, but don’t follow the narration too closely as it drops a few howlers, including the old canard about there being only a sole surviving print.

Shapeshifter: changes to the novel

Nosferatu, or to go by its full title, Nosferatu, eine Symphonie des Grauens (Nosferatu, a Symphony of Horror), makes many changes to its source, Stoker’s Dracula:

These alterations were likely made in an attempt to disguise Nosferatu’s origins and avoid accusations of plagiarism, but they weren’t enough. On its release, Prana were sued by Stoker’s widow, Florence. The film had not been a financial success; failure to secure widespread distribution in their home country and the US had hurt Prana considerably. The ongoing litigation with Florence Stoker caused yet more more damage and by the time she eventually triumphed in July 1925, they had declared the company bankrupt. For more, see Nosferatu and the Public Domain, an excellent article detailing the court case and the film’s legal status. Florence was thus thwarted in securing the £5,000 she’d demanded in settlement, but wasn’t about to let it end there: instead she insisted on outright ownership of the film then, having obtained it, ordered that all copies be destroyed. She had never even watched it. Thankfully, various incomplete prints survived in safe hands and copies continued to be screened intermittently, especially after Florence’s death in 1937. Inexorably, its reputation grew and those prints ultimately became the basis of all the fully restored versions we know today.

A tragic coda is that Prana originally planned to make nine more occult-themed films, with titles like Hollenträume (Dreams of Hell) and Der Sumpfteufel (The Swamp Devil) – imagine what we could have had!

Up the stairs we go… UK BFI Blu-ray

Nosferatu’s cultural influence is inestimable and it’s the great-grandaddy of virtually every horror film that followed. It directly inspired a near-eponymous 1979 remake starring a real life monster, as well as Shadow of the Vampire (2000) in which the actor playing Count Orlok is an actual vampire, running amok behind the scenes during the making of the original 1922 film. Cartoons, comics, novels, plays, TV ads, musicals, a ballet, and even operas – both rock and regular in at least 2001, 2005, 2014, 2016 and 2018 – have been based on the the Count’s misadventures. He’s been Reincarnated in Sound and 3D, and right now there’s yet another reimagining in the works, along with a mooted remake by Robert Eggers, writer-director of horror hit The Witch (2015). Orlok continues to fire the imaginations of artists, authors and filmmakers everywhere, and is showing no signs of slowing down in his unfathomably old age.

March 2021 update: This may be rough and ready but it’s rather brilliant! Has there ever been a better song dedicated to Nosferatu?

The Demeter: A Sea Shanty for Vampires – lyrics

Grateful thanks to Aitam Bar-Sagi, David Shepard, Lokke Heiss, Martin H. Larsen and Patrick Stanbury for help with this series of articles.

Thanks for such an informative web page!

The 4th March, 1922 première version was 1,967m and the 2005/6 Berriatúa restoration is 1,914m. So 53 meters of 35mm film still missing. At 18fps, I believe that works out to 1 minute and 30 seconds of missing footage. Does anyone know what we are missing? Are there any surviving scripts or other documentation on what is missing? Anything significant, or is it just trimmings off existing scenes?

Hi Brent, thanks so much for putting together such an in depth, thorough and fascinating read. I’m a musician interested in scoring for silent films. I’m currently writing a score for Nosferatu to be performed live with the movie later this year. I’m trying to get a definitive answer about which version of the film I can use without violating copyright. I’m planning a DVD release, so need to be careful not to infringe any copyright laws. Obviously I’ll be adding my own soundtrack, but am also planning on replacing all the text, inter titles and credits. Am I right… Read more »

Quebec, Canada doesn’t seem to be happiest place for those wanting decent Blu-rays of Nosferatu and Chaplin films :'( but your work was very interesting in all its aspects! Keep up the good work

This is an amazing review , I can’t thank you enough for such a extensive article about this classic movie . I have the MOC bluray and been thinking about importing the BFI as well . Any more thoughts about when they may release the updated bfi blu since there has been more work done in 2016 ? What is DCP ? Thanks again .