This is one of a series of articles covering everything Graf Orlok and best read sequentially. They detail the film’s history, many different versions and home video releases, and I suggest you start reading from Part 1, unless you want to skip straight to the restored DVD and Blu-ray reviews.

Purists (and those with no sense of fun) look away now. Over the years, Count Orlok has been reimagined more times than he’s had hot necks, and one perennially popular way is to give him and his co-stars a voice – literally. Digital technology makes this easier than ever before and I’ve dug up a clawful of noteworthy examples. To those who cry “Sacrilege!” – and those who don’t – I’ll remind you that the idea of a sound version of Nosferatu is nothing new. Following its original 1922 release, the film was bought by a company who re-edited it, shot new scenes, and released it as a part-talkie retitled Die zwölfte Stunde (The Twelth Hour, 1930). At least in the main examples here, the original film remains respectfully intact – for now… 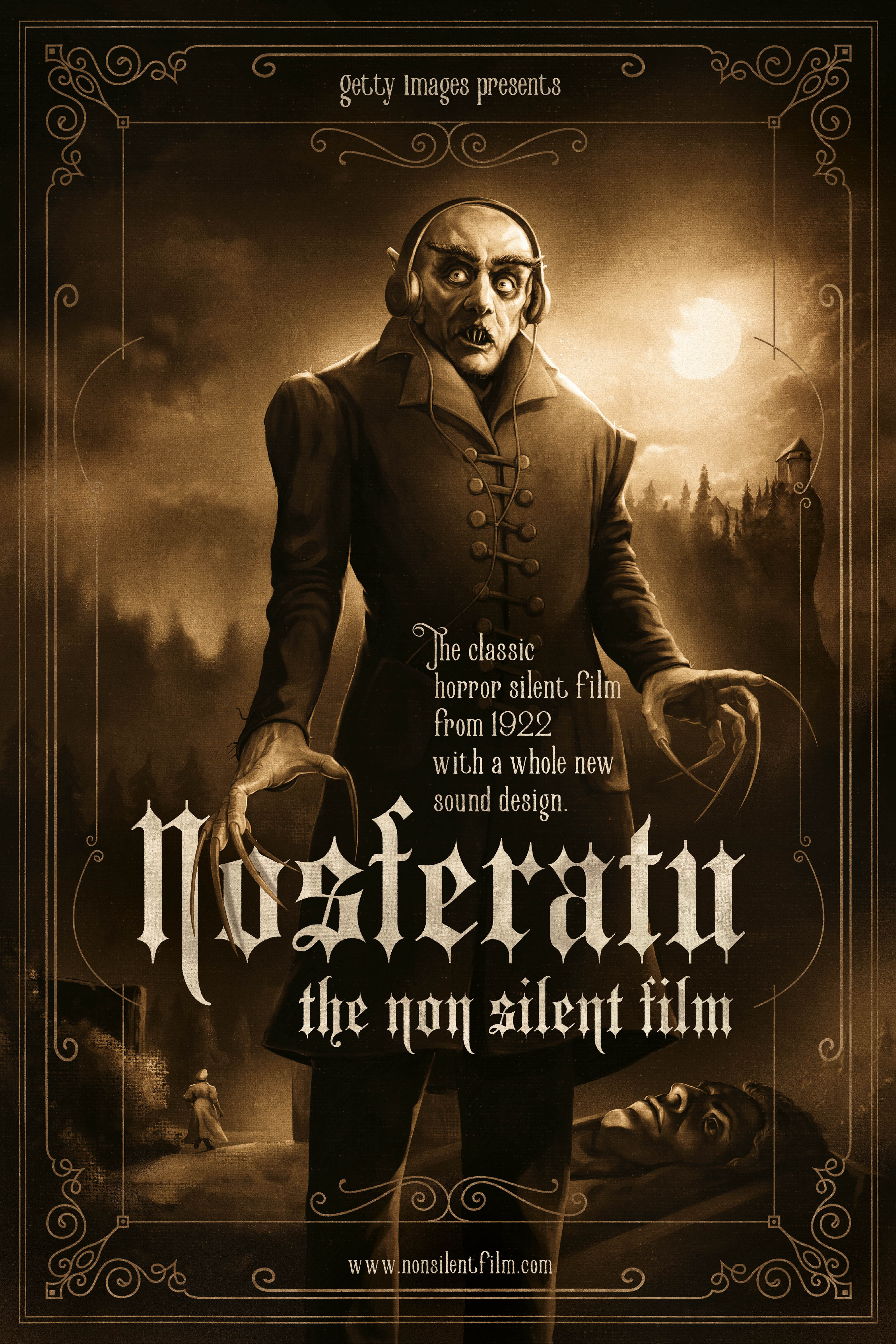 To showcase their vast audio archive of music and sound effects, in 2017 Getty Images Brasil created a completely new soundtrack for their “nonsilent” version. But they’ve gone way beyond their remit and created a real treat for film fans. Over the space of three months, they worked with Punch Audio to synchronise thousands of different audio samples alongside Orlok’s misdeeds. The dedicated website hosting the results of their efforts is ingenious. It allows the option of watching Nosferatu with waveforms of every sample overlaid, including full details for each one and the ability to play (or buy) them individually.

Now, I’ve no time for Getty per se: time and time again they’ve used bully boy tactics to try and coerce website owners into handing over money for using images whose copyright Getty allegedly owns. It’s often a complete lie: they’ve even been caught out demanding money from the actual copyright holders! And they’re not the only ones: Alamay and various others are culprits too. Luckily, they’ve been called on it repeatedly in the press, but it’s too lucrative a revenue stream, so they show no sign of stopping. Ironic then that Getty should yet again resort to stealing themselves, as for their Nonsilent Nosferatu they’ve appropriated Kino’s problematic transfer of the film’s 2006 restoration. In the spirit of all good pirates they’ve chopped off the idents and restoration credits from the top and tail of the film. They’ve also removed the original tinting and deliberately degraded the video quality of the English intertitle version. Though the film itself is under copyright, the first unrestored B&W version to become widely available (most commonly but erroneously referred to as the “public domain version”) is plundered unopposed for retooled versions such as these. However, even if we allow for that version to be fair game, this restoration, along with its newly designed and created intertitles, definitely is not. At the very least, Getty should have used Nosferatu‘s unrestored B&W version for this project.

Yes, Getty Images are copyright thieves, and hypocrites to boot, but that stands apart from this remarkable achievement in creativity and audio engineering. Like the other examples here, it’s a fine testament to the technical skill and hard work of all involved.

Nosferatu: The Nonsilent Film website – Update: Launched in April 2017, the site expired at the end of 2022 and its complex nature means the Wayback Machine save is a dud. Oh well, it was nice(feratu) while it lasted. Sigh. But like the film itself, all is not lost: here’s another copy, albeit in even lower quality.

Rendered in like fashion though with much less finesse, Jeff Cooper’s 2008 Full Sound version is still mightily impressive for the sheer amount of work that went into it.

He also created a new, non-talking sound design for the original screen version of Frankenstein and even produced a couple of original horror films.

This similarly titled 2010 redux is the brainchild of Strephon Taylor of November Fire Recordings. In addition to dialogue and effects, it includes a new score by his rock band Hobgoblin. While it isn’t the worst rehash mentioned here, I doubt anyone, including its makers, will ever consider it their go-to version of the film. Taylor and his cohorts also supplied aural excitement for versions of Caligari (1920) in 2011 and The Golem (1920) in 2013.

Also in 2010, James Casnig aka Atom Age Media had a fair stab at voicing the Count – and every other male onscreen. As for poor old Ellen/Nina, he simply cut out her speaking scenes. In the full version of the, film, she doesn’t get to say much but what she does is important. Although Casnig plays it straight, his efforts can’t help but occasionally be unintentionally funny, just like his similar take on Dr. Jekyll and Mr. Hyde (1920). Among various doctored clips of both films on his Youtube channel, he even has a go at adding (very) rudimentary colour to Nosferatu.

Orlok the Vampire in 3D

Recut, rearranged, added to, subtracted from and comprehensively messed up all round, this final 2010 aberration (just about) technically does what it says on the tin. But it’s an unmitigated disaster that will horrify even the most uncritical non-purist. One Keith Carter is the chief perpetrator and Orlok is for once the unwitting victim. You have been warned, but don’t just take my word for it. For the curious, here’s an in-depth report on how they did it. Certainly, there’s no small amount of talent involved but ultimately it would have been better spent elsewhere.

William (or Bill) Schmalfeldt is a somewhat controversial figure, as a quick search of either iteration of his name will reveal. Over the past couple of decades, in addition to various other activities he’s turned out a prolific number of books, spoken word albums and videos, largely with a political slant. Here though, we’re more interested in his on-the-fly, quasi-commentary for Nosferatu. Knocked out in 2016, this is strictly Mystery Science Theater 3000 (MST3K) territory, underscored with modern public domain music by prolific composer Kevin MacLeod. The music chosen from McCleod’s vast library is appropriately moody and atmospheric, and indicates he could potentially create a very superior custom score for the film. In fact, said music is the best thing about this effort, especially as Schmalfeldt’s also cropped the original visuals to widescreen, losing a chunk of the top and bottom edges in the process.

Schmalfeldt also did a similar job on cult camp classic, Reefer Madness (1936, here renamed Gladness) and “Selected Short Subjects”. This one is a little superfluous though, as Reefer is a talkie and unsurpassably funny with its original audio intact.

A silly Symphony of Horror

The latest full length parody, executed by Dennis Simcott aka SolarShine in 2021, is in the same vein as Schmalfeldt’s but has a lighter touch and is a lot of fun. It also features a surprisingly good original score and, playing at double speed, is reminiscent of the Fractured Flickers and their delightfully disrespectful, irreverent ilk.

Playlist, including full film and score

A quick aside: if you’re after a decent hit of Reefer, the air is thick with many low quality PD copies drifting around; avoid them all. You can’t do better than Legend Film’s 2004-restored, trippy, deliberately garishly colorized version (CV). It was first released on DVD alongside the restored original B&W version, various extras, and two optional commentaries: one technical and one from actual MST3K alumnus Mike Nelson. In 2009, the CV was released again on a vanilla DVD, but with a new commentary from three ex-MST3Kers: Mike Nelson, Kevin Murphy and Bill Corbett, aka RiffTrax. A third outing for the CV came in 2011 on BD and DVD. This time it had a new intro including three shorts and another new commentary, all recorded in San Diego at Rifftrax Live! 2010.

This abbreviated version, played strictly for laughs, is courtesy of Mario Wienerroither, best known for his incredibly popular “Musicless Music Videos”, such as:

Now if only he could kick his annoying habit of cropping and stretching most of his 1.33:1 aspect ratio content to fill a 1.78:1 frame…

This brilliant, award winning short is perhaps the best Nosferatu homage to date. It’s very funny and dishes out knowing winks to other works as diverse as Caligari; Winsor McCay’s How a Mosquito Operates (1912); David Shepard’s Rohauer-parodying version of The Sneeze (1894); and, naturally, SpongeBob SquarePants. Originally titled A noite do vampiro, Night of the Vampire comes from Brazil-based animators Alê Camargo and Camila Carrossine aka Buba Filmes, who also used it as the basis for a cute, also award winning children’s app. Hopefully there’s more to come, as back in 2014 director David Lee Fisher announced he’d be helming a partial remake titled Nosferatu Remix, somewhat akin to a modern version of Die zwölfte Stunde. Alongside other actors, Hollywood A-lister Doug Jones is to play Count Orlok in new footage and scenes to be integrated with the old. Jones is well known for being a regular featured player in Guillermo del Toro’s films, such as Pan’s Labyrinth (2006), Hellboy I and II (2004, 2008), and The Shape of Water (2017). He also played the Surfer himself in Fantastic Four: Rise of the Silver Surfer (2007) and Cesare in similarly-conceived 2005 remake of The Cabinet of Dr. Caligari (1920). Amid a welter of publicity and interviews, $67,500 was successfully raised via crowdfunding to finance Fisher’s latest project. However, since 2016 things have gone very quiet while Jones’ career continues to scale new heights, so let’s hope we haven’t heard the last of this particular incarnation of Nosferatu.

September 2021 update: Despite Jones tweeting it’s “coming in the new year!” in November 2018, there’s been nothing from any quarter since. The website died a death ages ago; evidently the domain is now with a keen fan. Sadly, it looks like this promising project is sleeping permanently in its coffin.

There was also a dreadful 3D conversion, containing new music and foley, from a few years back called “Orlok the Vampire.” I’ll admit, I’m basing my harsh judgment on its teaser trailer, which features the first scenes between Hutter and Orlok. The latter sounds like he’s struggling with COPD, and has to be heard to be believed!

I understand F. W. Murnau’s personal copy of thescript exists. Maybe you could round up a copy and post it as a PDF.
Great site.