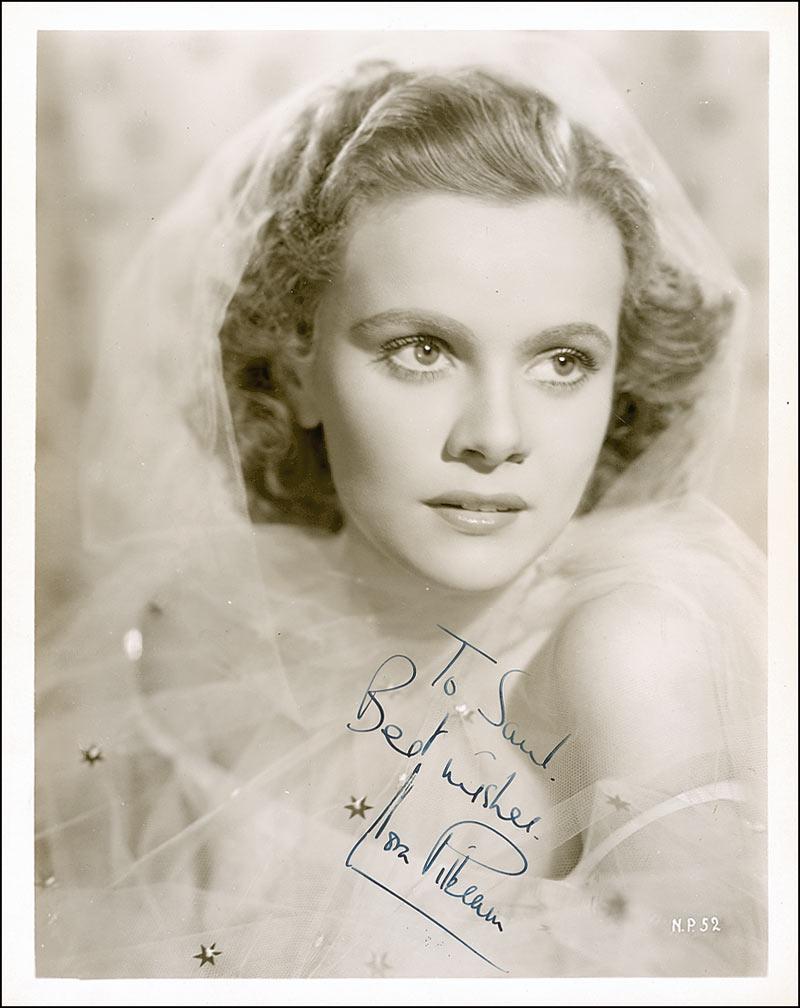 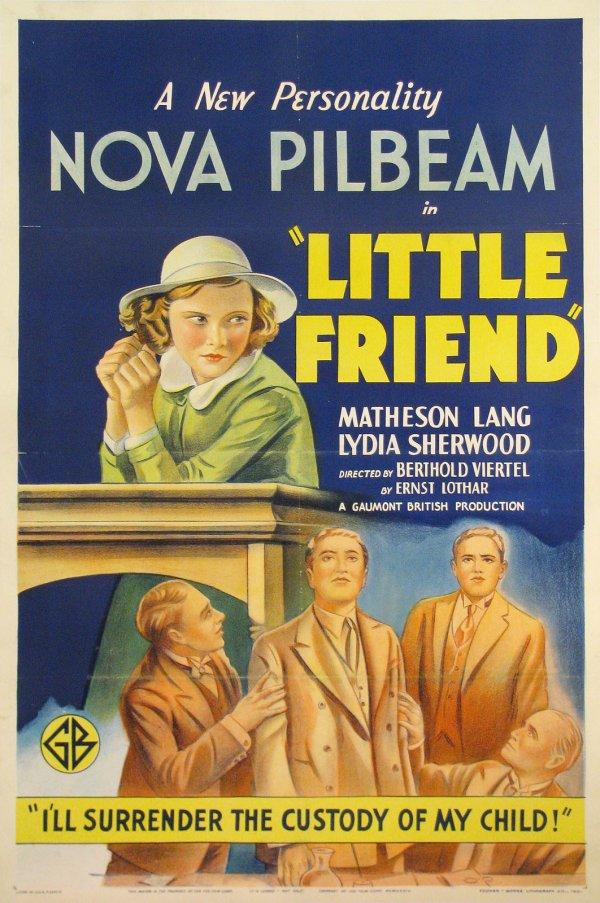 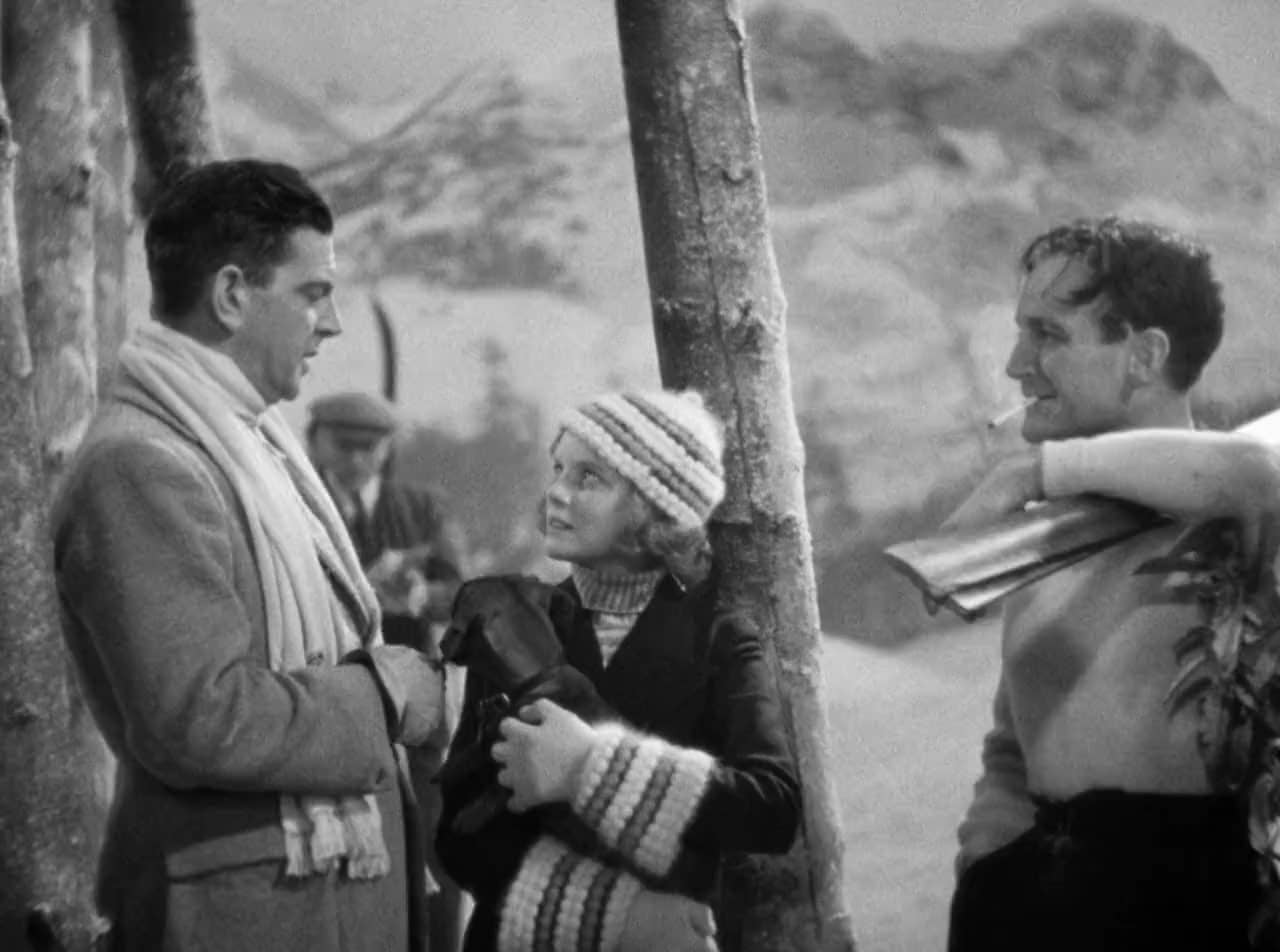 L-R: Leslie Banks, Nova and Pierre Fresnay, on the eve of a (snow)storm

This nail-biting (and tooth-pulling!) classic is dealt with separately here:

Alfred Hitchcock Collectors’ Guide: The Man Who Knew Too Much 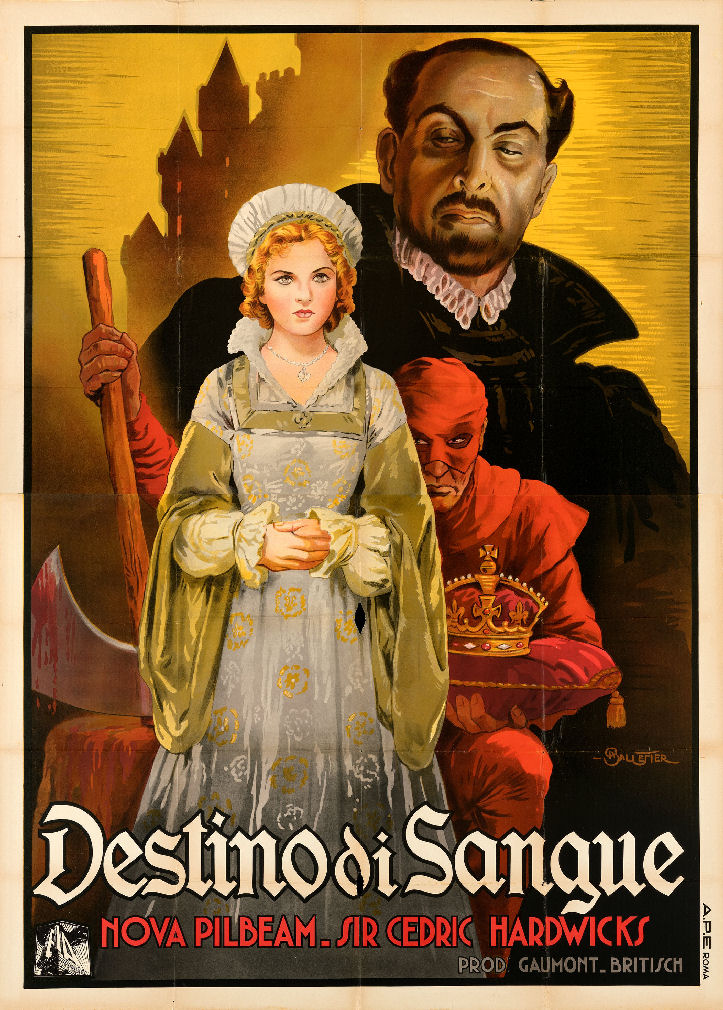 Nova here movingly essays the role of doomed heroine Lady Jane Grey, the “tudor rose” of the title. She gives a quiet powerhouse of a performance among an exceptional ensemble cast, most notably Sir Cedric Hardwicke foreshadowing his turn as the evil, twisted antagonist of The Hunchback of Notre Dame (1939). If you only see one other film of hers other than her Hitchcocks, perhaps it should be this one. But then, you’d be missing out on her many fine features, including those in which she excels at comedy, so try and catch them all! 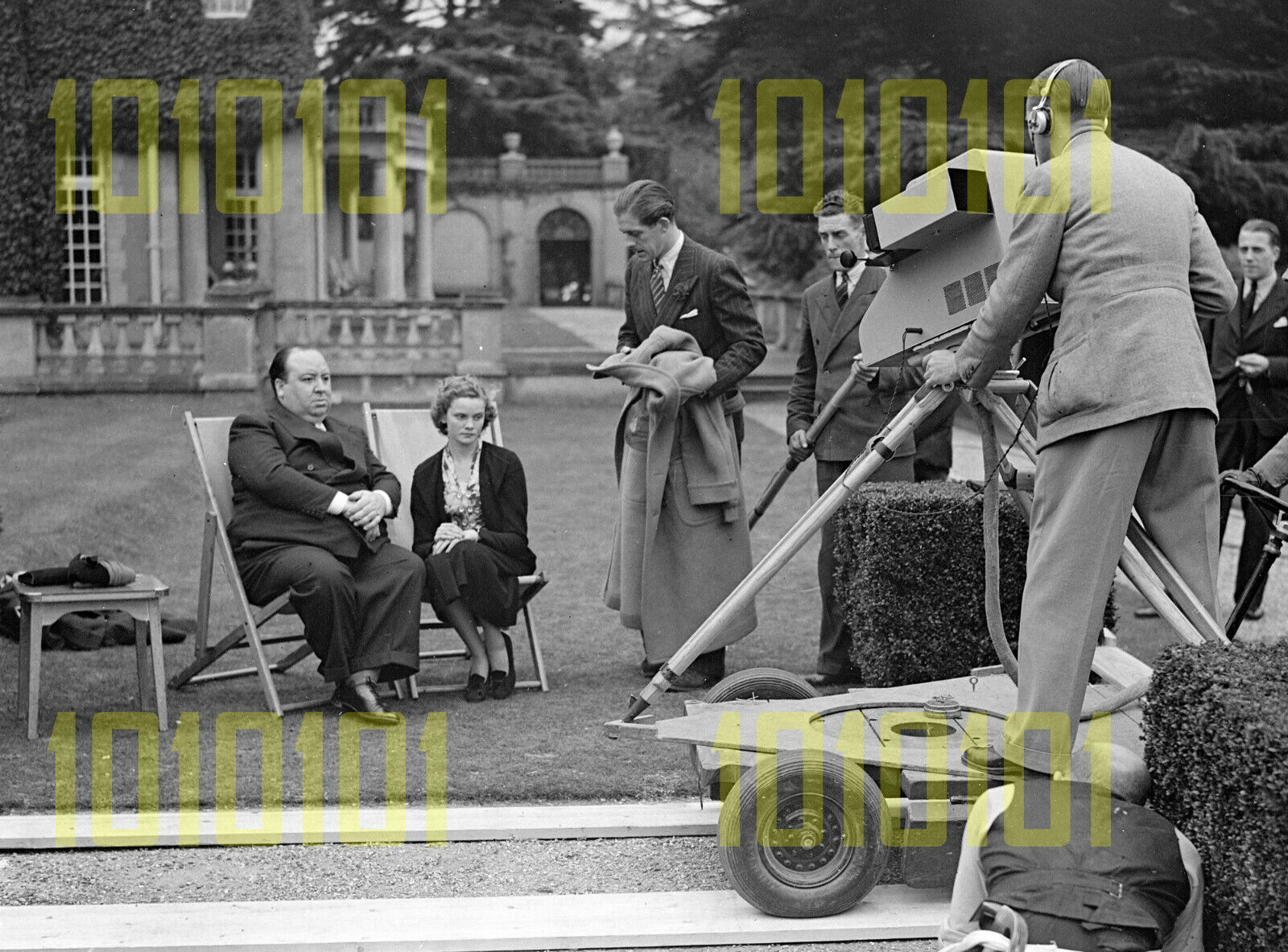 Director and star of Young and Innocent being interviewed by Leslie Mitchell (holding coat) in the gardens of Pinewood Studios on 5 October 1937; uncropped, here are more.

Three series of 15-minute BBC shorts featuring the cream of British acting and filmmaking talent showcasing their latest projects. Each of the three series focuses on a particular studio: Pinewood, Denham and Elstree. Interviewed during the making of Young and Innocent, this episode, “No. 1: Pinewood, Part 9”, saw Nova joined by Hitchcock. Apparently lost. 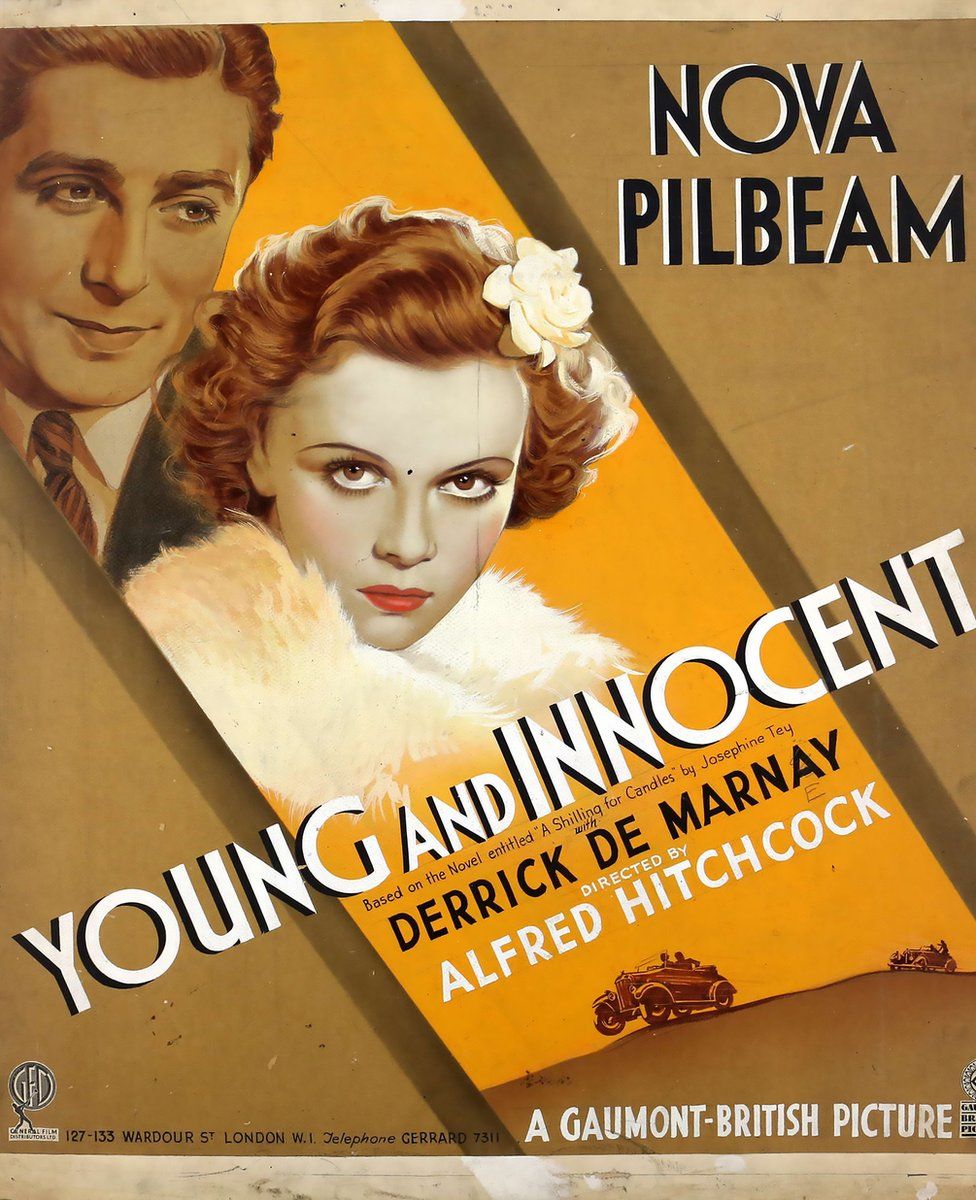 One of Hitch’s very best, you can read all about it here: 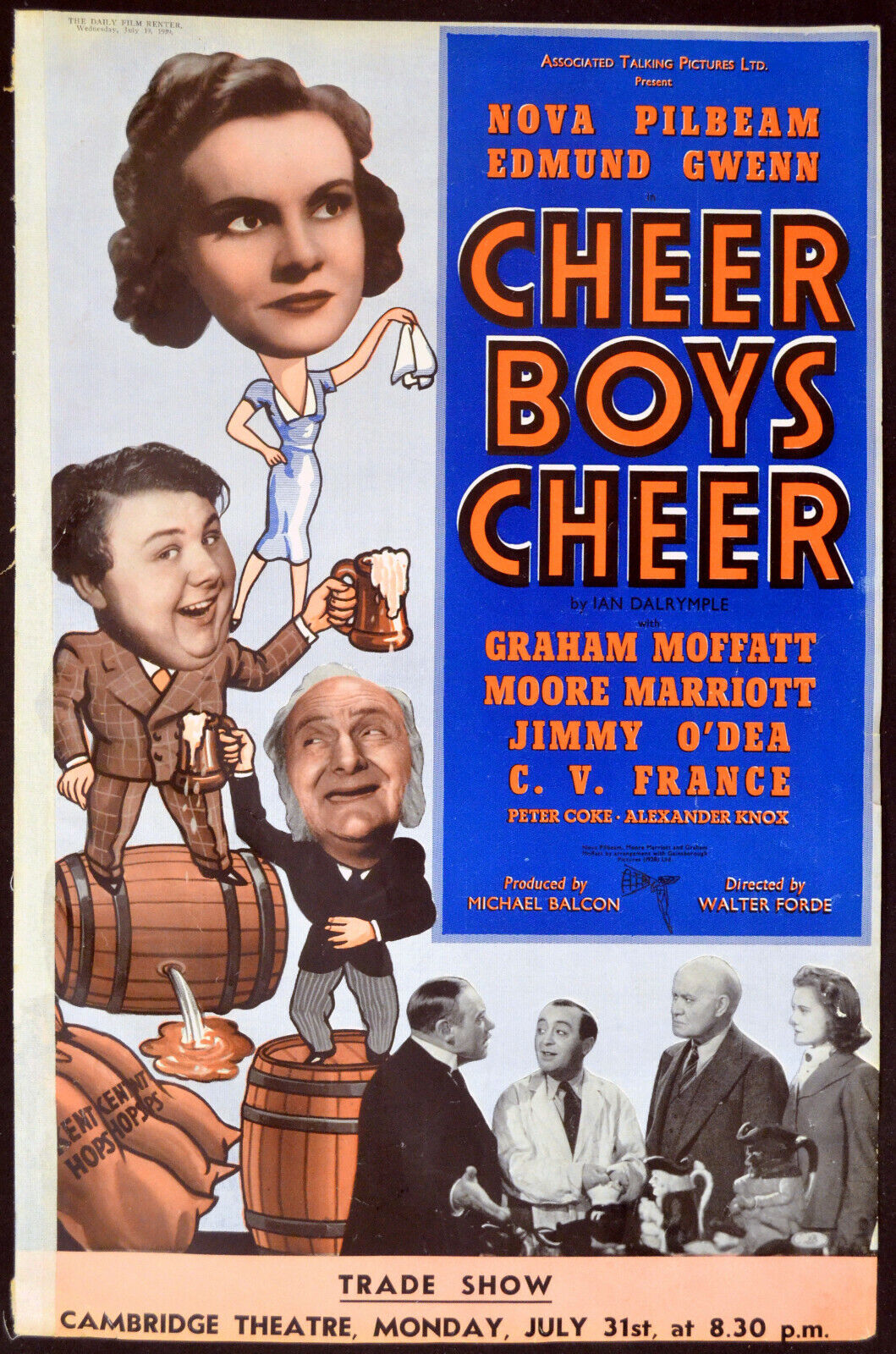 This Ealing comedy, a Romeo and Juliet-esque tale of two warring tribes eventually united by the love of their respective offspring, has just one release to date:

This 85-minute TV movie is based on the same play as two eponymous UK/French-made multiple-language version films, one of which coincidentally starred Nova’s mum!

Nova was famously a strong contender for the lead in Hitchcock’s Rebecca – apparently David O. Selznick himself was keen on her for the part but Hitchcock wasn’t so sure; obviously Joan Fontaine won out. However, Nova’s talent was put to great use elsewhere as while Rebecca was being made she appeared in this criminally underappreciated classic that, though very different, is easily its equal. It’s based on the 1939 play (Internet Archive) by tragic Jewish-German émigré Ernst Toller, his last completed work before his early death that same year. The play in turn was inspired by real-life pacifist preacher Martin Niemöller, known for his much-quoted poem “First they came …” Among a uniformly exceptional cast, Wilfrid Lawson, perhaps best known as Eliza Doolittle’s feckless father in the original screen Pygmalion (1938), gives a powerhouse performance in the title role as he resists the Nazi takeover of his town. Nova plays his brave, clever daughter in one of her finest screen outings. Oh, did I mention it’s from the brilliant Boulting brothers? Absolutely unmissable.

Incredibly, it’s so far only been issued on an Oz region 4, NTSC DVD that though for most will be quite pricey on import, is worth every penny.

July 2022 update: UK-based Powerhouse Films have come to the rescue with the latest entry in their impeccable Indicator range. Their new identical, region A or B-coded BD has the following spec:

When the initial run has sold out, it will be reissued in a standard keep case without the booklet. 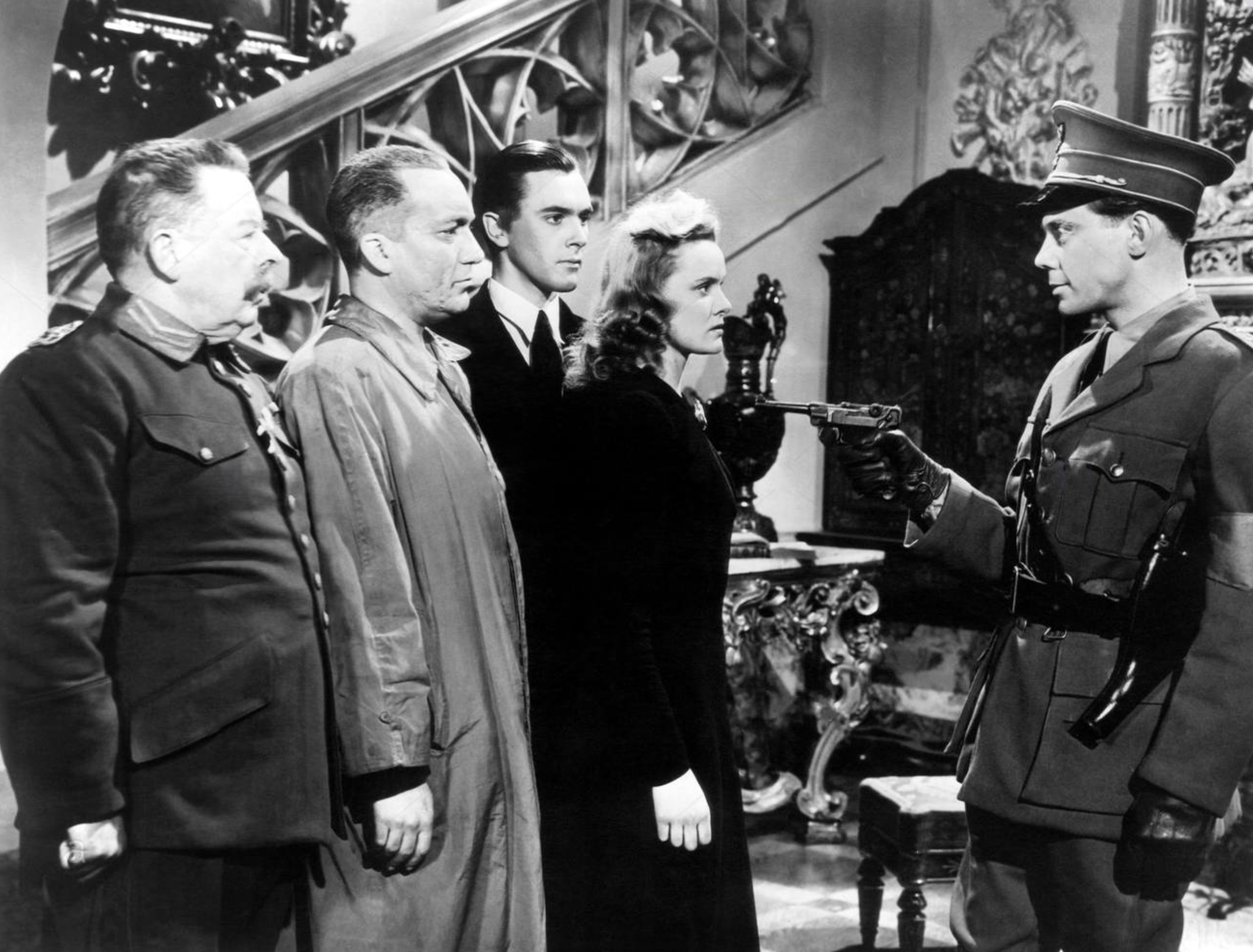 Yay! Other than her Hitchcocks, this is the only outing of Ms Pilbeam’s thus far available in HD, and she expectedly shines in an excellent new transfer that’s virtually spotless aside from the odd and fleeting vertical hairline scratch. Based on the eponymous 1938 play by M.J. Farrell and John Perry, it’s a lighthearted comedy about the love lives of the Furzes, a horseracing-mad Irish family, with Nova as ‘Baby’, its youngest headstrong scion. The Furzes may be landed gentry but that’s no excuse for the array of shaky Irish accents on display throughout. In fact, W.G. Fay is the only cast member actually hailing from the Emerald Isle, while Margaret Rutherford reprises her role from the play’s hit West End run. I find the dodgy accents lend to the comedic charm but if you’re Irish yourself you may find it a bit annoying. After all, such practise – should we call it greening-up? – isn’t even a thing of the past. beats me why they didn’t just transpose the setting to England; most of the action takes place indoors and there’s nothing in the plot tying it specifically to Ireland anyway. All in all though, its gentle charm will easily win you over and lastly, a special mention for Nova’s unfeasibly pneumatic blonde barnet, which deserves an acting credit all of its own! 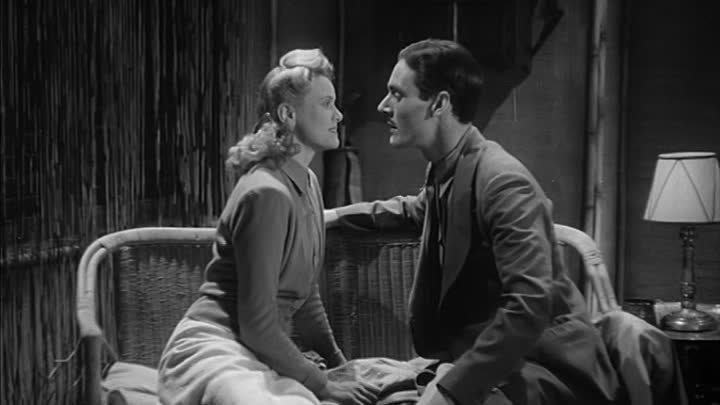 Writer-producer-director Walter C. Mycroft, the man chiefly responsible for Spring Meeting, scores another hat trick with this feelgood winner in which Nova’s pneumatic barnet comes close to stealing her every scene! Star Isabel Jeans, also featured in Easy Virtue for Hitchcock and this time plays another woman whose past comes crashing into the present and upsetting the ordered lives of those around her. But this time it’s played strictly for laughs. Jeans also played the seductive female lead in the trio of films starring Ivor Novello as The Rat and had additional supporting roles in Downhill and Suspicion for the Master, just a few highlights of a varied 50-year-plus acting career.

US lobby card, complete with a couple who bear no resemblance whatsoever to the actual stars of the film.

Nova’s next starrer started out life as a propaganda short before being expanded by Ealing to a full length commercial feature. The final scene has an appearance from Basil Radford and Naunton Wayne in their Charters and Caldicott guises, albeit unnamed, still riding a wave of popularity precipitated by their memorable turns in Hitch’s The Lady Vanishes. The Next of Kin was also adapted as an hour-long BBC Radio play involving most of the principal cast and crew.

The original 102-minute film version (96min w/4% PAL speed-up) is available on on two identical UK and Australian region 0 DVDs, released in collaboration with the Imperial War Museum. It comes well stacked, as in addition to the main feature it includes three more propaganda films: The New Lot (1943, 42min), What’s the Next Job? (1945, 21min) and Read All About It (1945, 28min).

Meanwhile, the drastically edited US release version (1943, 75min), with added wraparound extracts of a J. Edgar Hoover speech, has been released by Alpha Video in the US. It’s a bootleg though, as according to film historian Nick Cooper, the film is copyright in the UK/EU until the end of 2059, based on its co-writer John Dighton being the last co-creator to die, in 1989. In the US, it was originally registered with the Copyright Office (“Next of kin. © Apr. 26, 1943; L 12020; Universal pictures co., inc., New York. 2284” p. 69), so it should have been renewed in 1971, but there’s nothing listed, nor in 1970 or 1972. That suggests it was in the US public domain between 1971 and the end of 1995, before being restored via the Uruguay Round Agreement Act, as with many of Hitchcock’s British films. 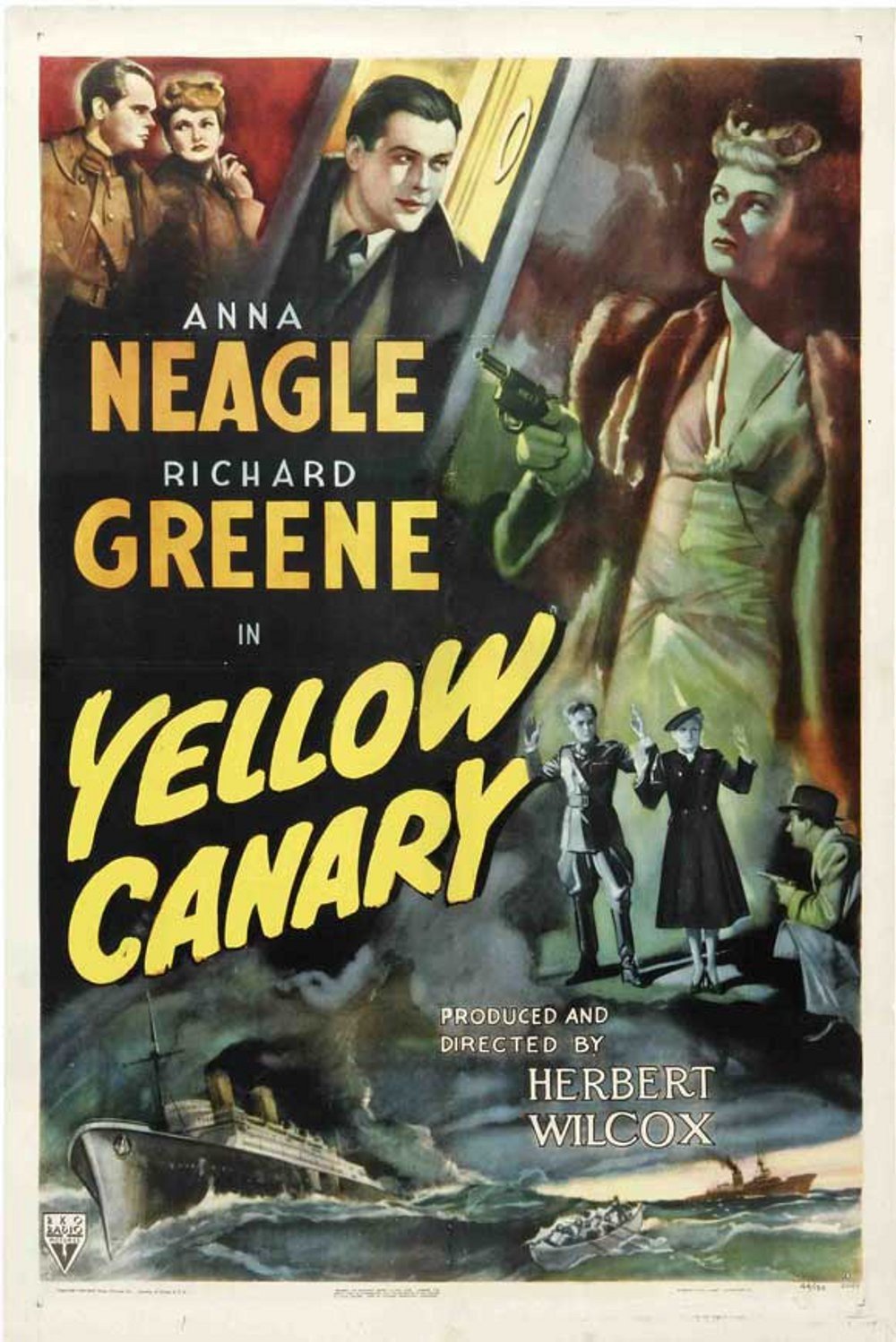 Nova plays able support in this WWII spy thriller loosely inspired by real-life Nazi sympathiser Unity Mitford. If you’re in the UK and have access to BBC iPlayer, there’s a nice print ‘permanently’ available for free, the only authorised release to date. Note it’s not to be confused with The Yellow Canary, a 1963 US hostage thriller. BFI holdings.

There are various home-made DVD-Rs on eBay, iOffer, etc that are easy to spot but beware the only ‘professional-looking’ disc so far: a poor quality Spanish bootleg DVD-R from Vértice Cine. It’s from a VHS-recorded TV broadcast of the edited US release version, shorn of around 15 of its original 98 minutes. Also avoid the pirate upload for sale on Amazon US and UK, likely from the same source.

Romantic comedy (104min), not to be confused with the 1934 pre-Coder of the same name. BFI holdings.

An early drama to address the relative merits of holistic versus orthodox medicine. 81 minutes; BFI holdings. 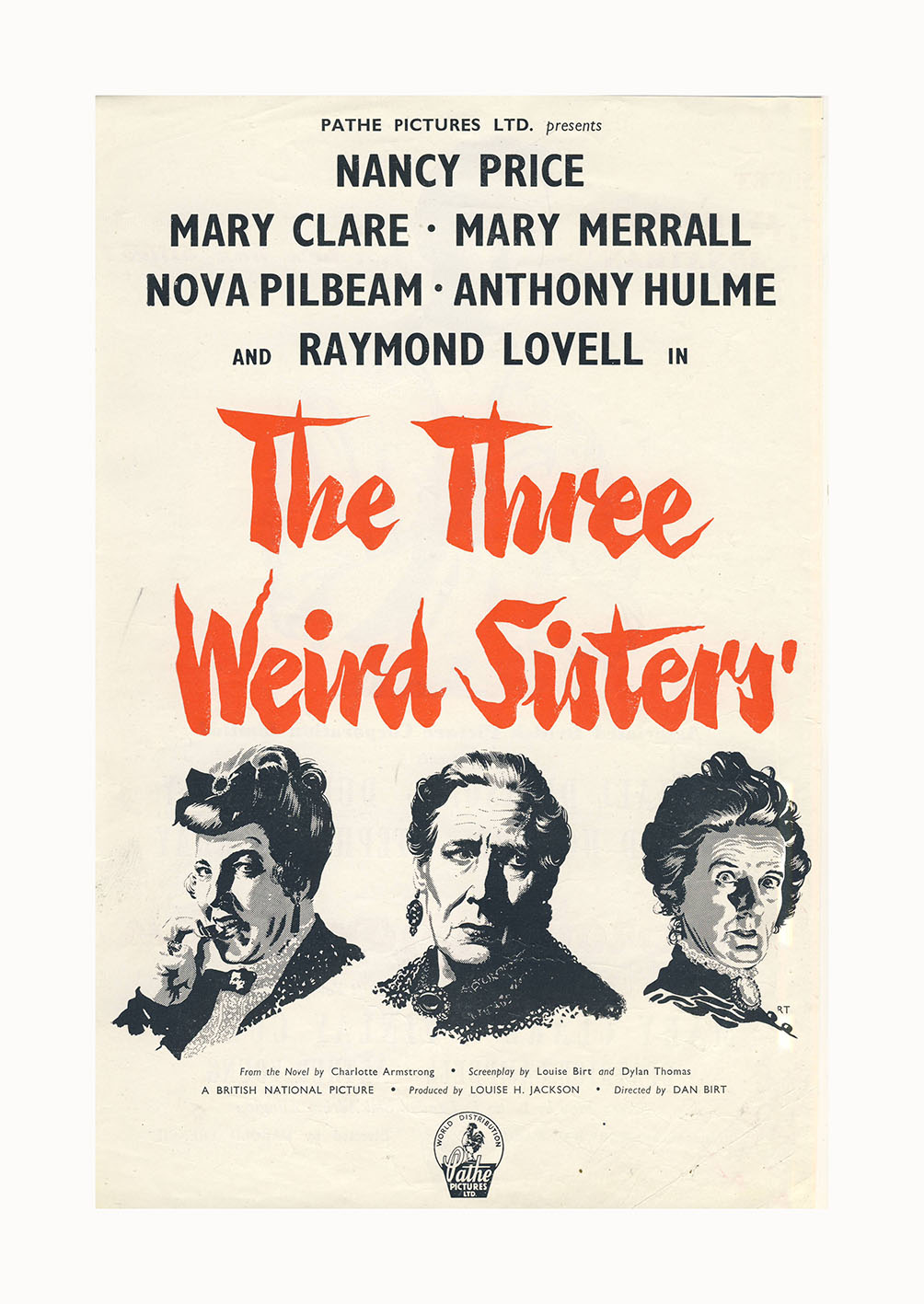 This dark, gothic melodrama is based on American author Charlotte Armstrong’s 1943 novel The Case of the Weird Sisters and was co-scripted by poet Dylan Thomas. This was Armstrong’s first work of mystery fiction, the genre in which she found the most success, and many of her novels and stories were adapted for other films and TV programmes. She also adapted the works of other writers for the screen, including three episodes of Alfred Hitchcock Presents. Notably, she also adapted her own 1957 novel Incident at a Corner for perhaps the most celebrated episode of Presents’ sister series Startime (1960), directed by the man himself.

Weird Sisters the film hasn’t been officially released on physical media as yet, although there are various cheap, home-made bootleg DVD-Rs of a zoomed-in, blurry, VHS-recorded TV broadcast, such as that from US pirates Reel Vault. But if you’re in the UK, you can view a very good condition copy for free, courtesy of the BFI: 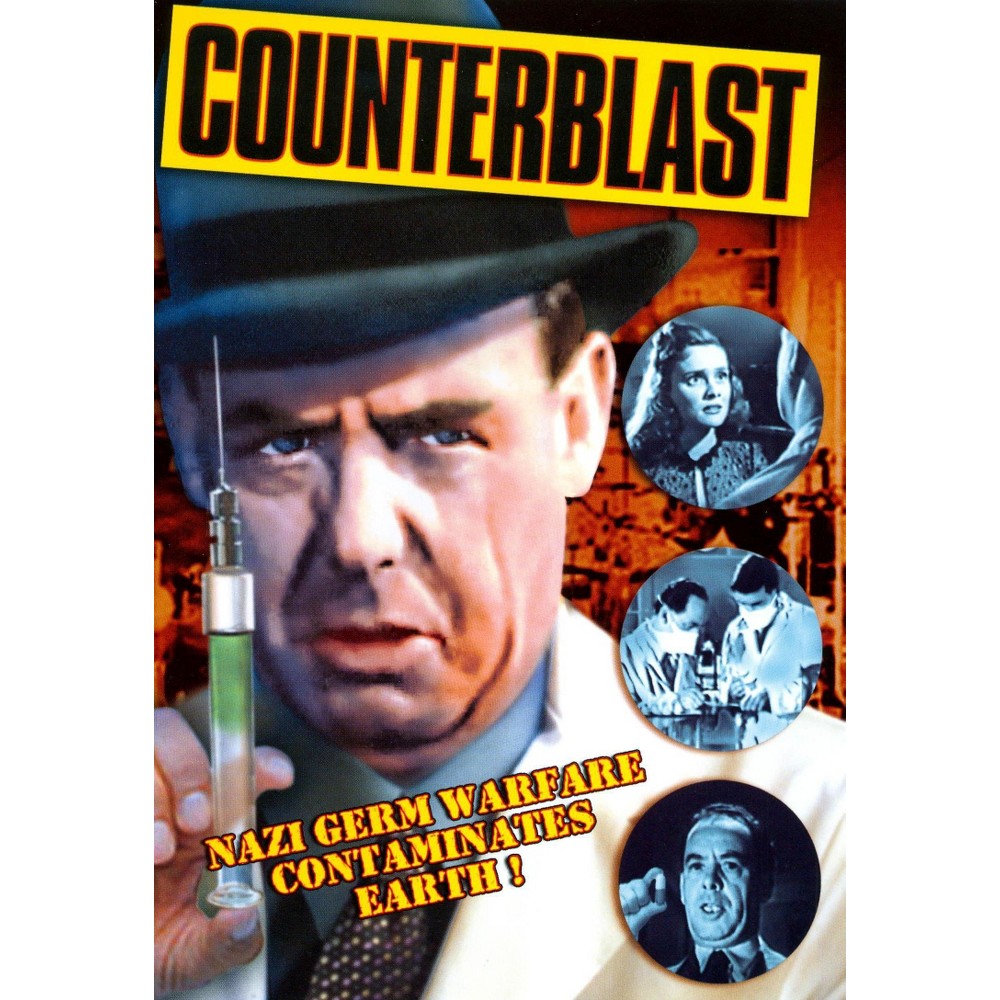 Nova again stars alongside Mervyn Johns in this timely piece about germ warfare and a race to get the all-important vaccine. As per The Next of Kin , this film is copyrighted in the UK/EU until the 2042, based on the 1972 death of co-writer Jack Whittingham. Although the full length negative and other early prints are in the BFI Archive, it’s unavailable officially but a poor quality transfer of the US version, edited down to 90 of the original 99 minutes, is on various supposedly-public domain, actually-bootleg discs, eg:

28-minute TV programme with Nova, alongside an impressive roster of participants, in one of several vignettes about 100 years of party dresses. Lost?

Sadly likely lost, this 110-minute TV movie is based on the 1934 play by Keith Winter. Though originally set in an Elizabethan farmhouse in Yorkshire, in the wake of its hit Broadway run it was transformed into an altogether glossier 1938 Hollywood movie set in New York and Wisconsin. Directed by Frank Borzage and starring Joan Crawford, Margaret Sullavan, Robert Young (two years after Sabotage) and Melvyn Douglas, the original film’s official releases include a region 0 DVD that’s playable anywhere. Just avoid the cheap bootlegs from Spain (CineClub Channel) and Italy (Golem).