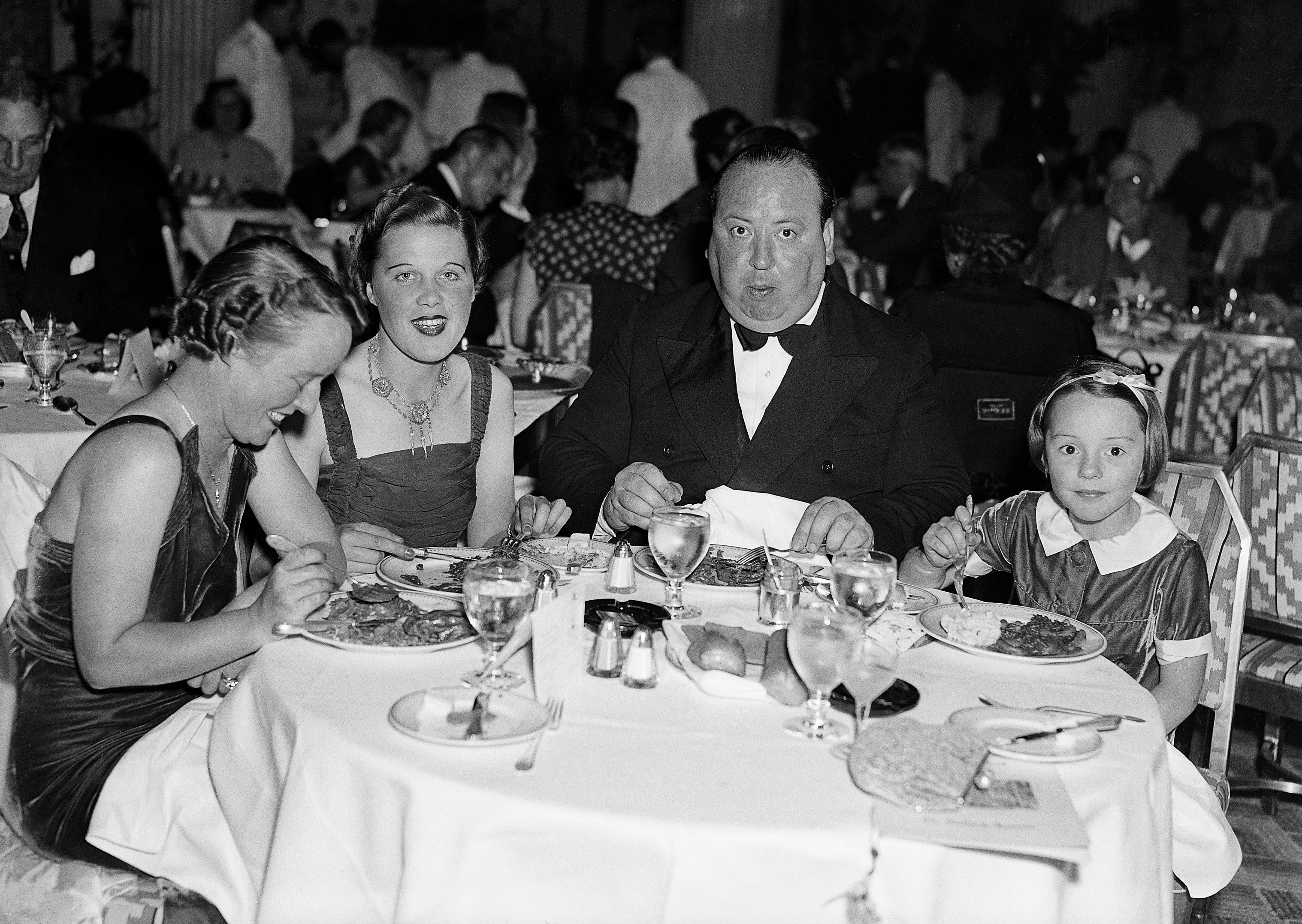 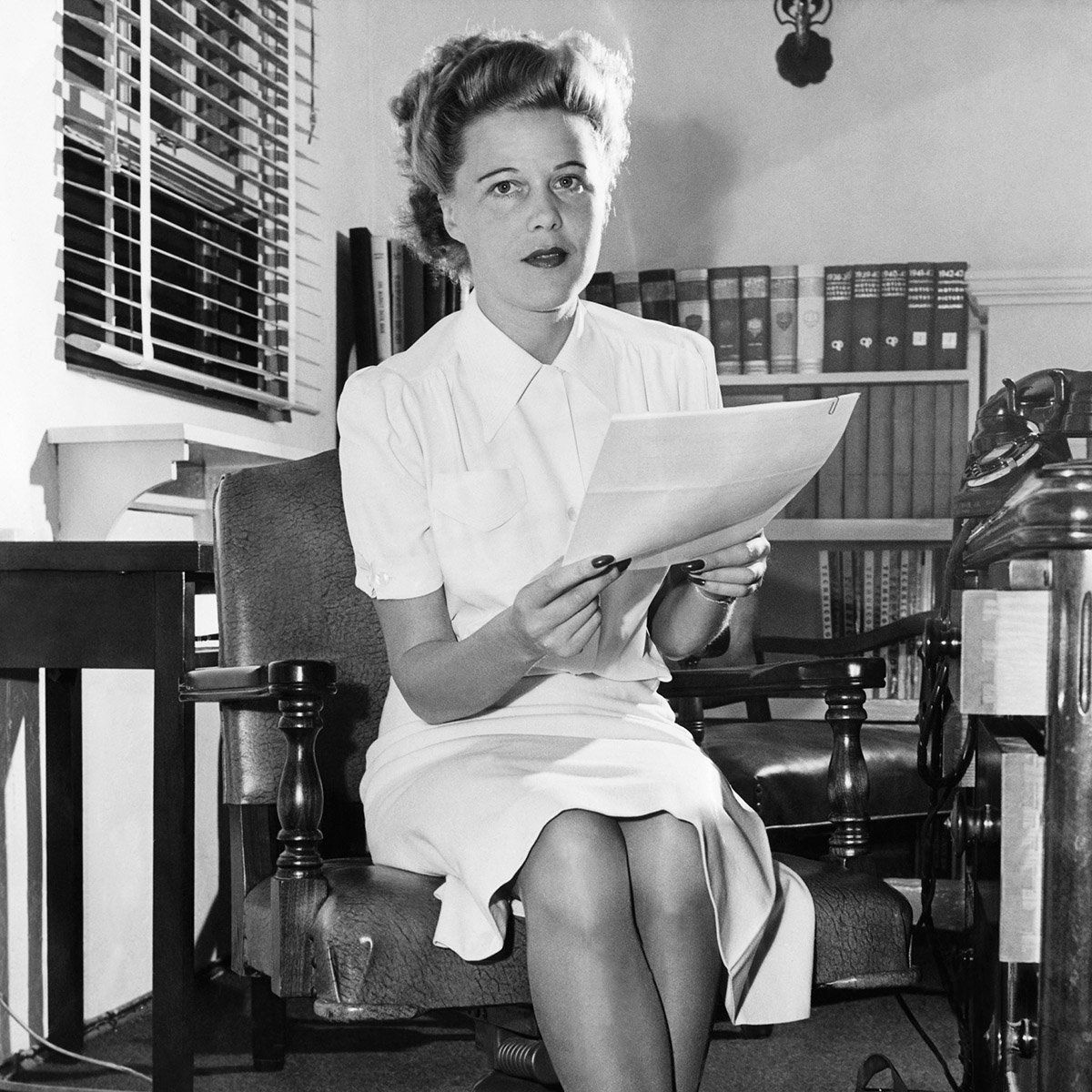 Apart from his wife Alma Reville’s lifelong and inestimable contributions to Alfred Hitchcock’s career, Joan Harrison had the longest personal and professional relationship with the Master. Born into a journalistic background and going onto study in related fields, her own future career must have seemed all but assured. But life took a left turn when she joined Hitch as his secretary in late 1933 during pre-production for The Man Who Knew Too Much then worked increasingly, albeit uncredited, on his scripts. She received her first onscreen credit for Jamaica Inn and having established herself as an invaluable part of Hitch’s inner team, was a natural choice to accompany him and his family on their emigration to America in early 1939. Once there, she further proved her worth by co-writing the screenplays for Rebecca, Foreign Correspondent, Suspicion and Saboteur, picking up two Academy Award nominations into the bargain; the first woman to do so.

She then became a very successful screenwriter and producer in her own right, being one of only three women working in Hollywood in the latter role and the only one to do both. Perhaps most significantly, after more than a decade on her own, Harrison rejoined Hitch to produce all 268 episodes of his half-hour Alfred Hitchcock Presents TV series (1955–1962) and 23 (of 93) episodes of its expanded follow-up The Alfred Hitchcock Hour (1962–1965). Incredibly, she did all that while maintaining her own busy slate of major projects. Hitch may have been the public face of the programme but Harrison inarguably did more than anyone to ensure its quality, consistency and popularity throughout the initial broadcasts and decades since. In 1958, Harrison married the hugely popular thriller novelist and screenwriter Eric Ambler who, among his many accomplishments, penned the 1962 “Act of Faith” episode of Presents. Her association with the programme contributes to her being by far Hitch’s most frequent collaborator; the pair share 325 onscreen credits between them.

Alongside several of Hitchcock’s unjustly marginalised associates such as Charles Bennett and Eliot Stannard, Harrison is finally getting her due. Most recently, this comes in the form of Phantom Lady, an in-depth, impeccably researched and written biography by Christina Lane. It’s named after the classic 1944 film noir, Harrison’s first post-Hitch producing success, which was swiftly followed by a co-writing credit for Dark Waters later the same year. It was another solid noir and throughout her career Harrison worked mainly within the crime and thriller genres. Her biography is highly accessible but more than meaty enough for fans and scholars alike, and shines a revealing, evocative light on an important figure who for too long has been omitted from the annals of film history. In addition to uncovering numerous previously undocumented details, it firmly dispels the myth that Harrison has a cameo in The Man Who Knew Too Much:

“She is listed in the official credits as “Secretary,” a description that has led some to misidentify her as the woman who sits next to Lorre in the opening dining room sequence at the Swiss hotel (though the exotic brunette in the scene bears little resemblance to Joan). The truth of Joan’s participation is much more prosaic. “The actress in the movie [Edna Best] was supposed to drive a car in one scene,” Joan disclosed in a 1949 interview, “and she couldn’t drive. For one glorious scene, I became a double for the heroine, for the first and last time on screen.’

If Joan did serve as a substitute driver for Best, her fleeting moment likely ended up on the cutting-room floor. Jill’s scenes when she travels by automobile involve only taxis and police cars. In no scene is she, or her stand-in, seen driving. So why is Joan described as playing a secretary in so many credible references? One possible explanation: Joan was listed as company “secretary” in some of the film’s official documents, including call sheets and credit lists, which led to ensuing confusion about her role on the production. Even at this early stage, Joan was already playing the role of phantom lady.”

The type of lazy repeating of supposed ‘facts’ flagged up here by the assiduous Lane is something that plagues much film scholarship – indeed, scholarship in general – but is endemic in Hitch’s case. 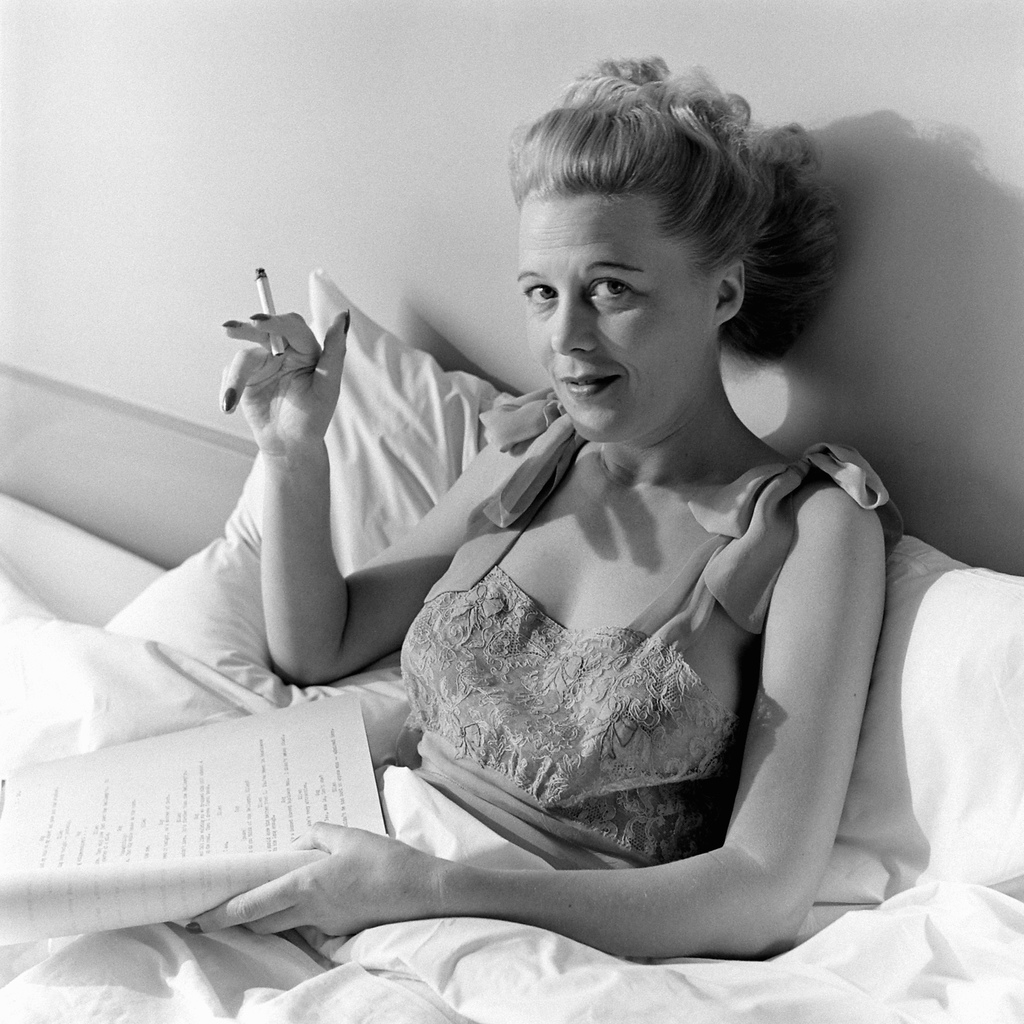 Joan Harrison, a cigarette and a script, in bed in Los Angeles, 1945. Don’t do this at home, kids – or anywhere else for that matter. Smoking, that is.

Harrison’s only known onscreen appearance is discussing Presents in two 1964 episodes of Telescope (1963–1973), a Canadian TV documentary series. She was interviewed along with Bernard Herrmann (transcript), Hour co-producer Norman Lloyd and Hitch at the latter’s Universal Studios office during the production of Marnie. Collectively titled “A Talk with Hitchcock” (52min), these excellent programmes have been issued as extras on most non-US releases of Lifeboat and a standalone US region 0 DVD that’s playable anywhere. 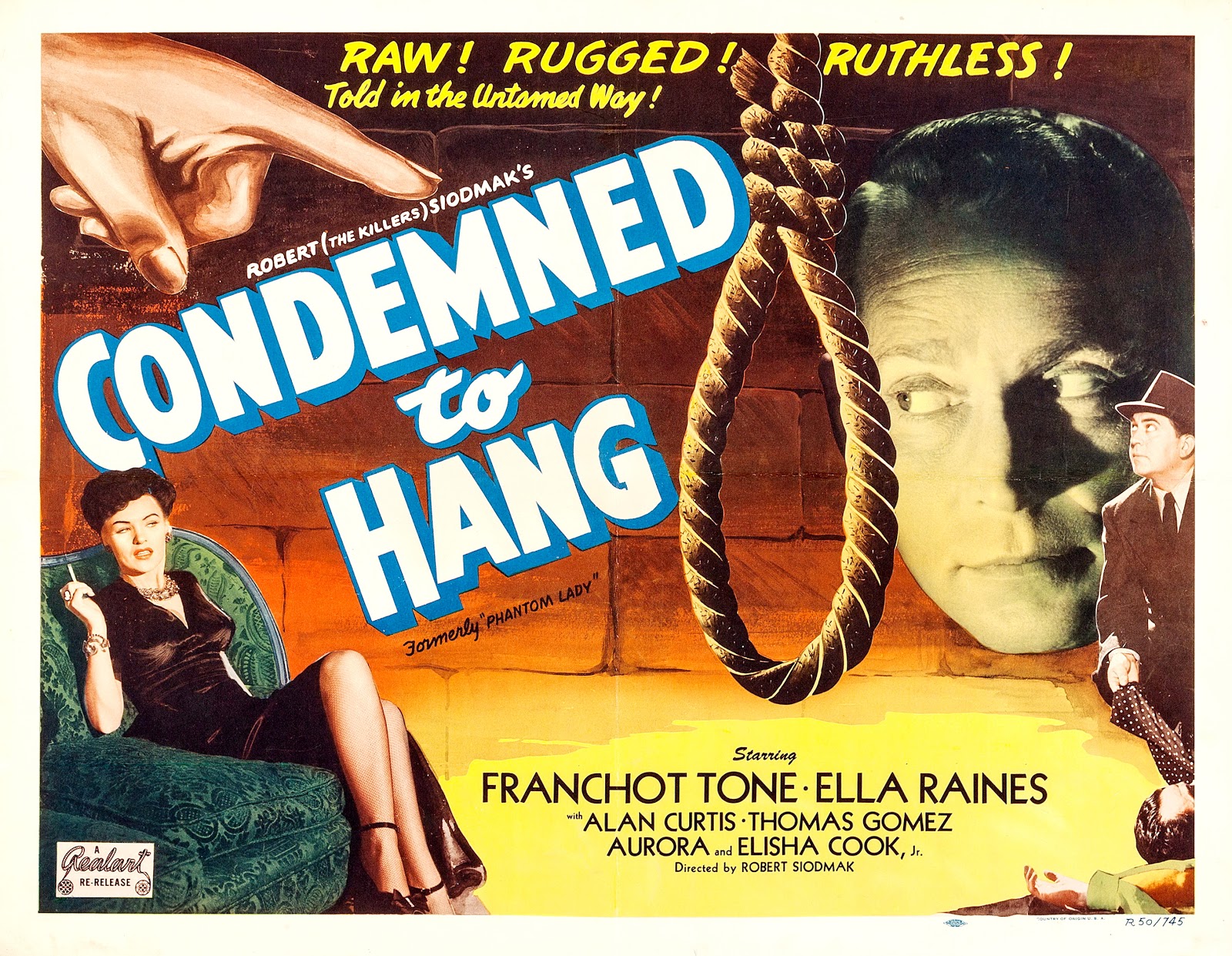 Phantom Lady was given the more lurid title Condemned to Hang for its 1950 US re-release, as evidenced by this lobby card. Yet more smoking, tut-tut.

This essential noir is based on the eponymous 1942 novel by crime writer Cornell Woolrich, although it was initially published under his William Irish pseudonym. Woolrich was a prolific author and his works were adapted into dozens of big screen classics of the genre; others were Rear Window and François Truffaut’s Hitchcock homage, The Bride Wore Black (1968).

Licensed home video options for Phantom Lady are a straightforward choice between old and new transfers. All DVDs feature the same decent transfer that’s quite heavy with with minor scratches and other signs of wear scattered throughout. That’s not entirely a bad thing; if anything its imperfections help evoke a suitably atmospheric noir mood. The US DVD has three very brief featurettes totalling eight minutes, and extensive image galleries. The French has an interview with film historian Herve Dumont (18min, in French), a documentary on the director, Conversations with Robert Siodmak (60min, German w/French subs) and the original trailer (1½min). The German has a gallery, that trailer again and an optional original dub Meanwhile, the Brazilian set has a wealth of noir cast interviews, featurettes, trailers, etc, totalling 90 minutes, though they all relate to the other films in the set and none directly to Phantom Lady. Only the French and Brazilian have optional subtitles in their respective languages, and all discs are region-locked.

The DVDs more than get the job done but these days the single best way to see the film – or two if you count HD streaming – is via these beautiful BDs:

Aside from being coded for regions A or B and the UK sleeve’s added ratings logo, Arrow’s simultaneously released transatlantic discs are absolutely identical. They have a near immaculate, digitally cleaned-up and stabilised transfer that in most regards advances significantly over the DVDs. Two demerits are that it’s inexplicably cropped on all sides compared to the DVDs, and is slightly too bright, actually losing some detail in certain highlights. But extras take a decisive leap forward with the Dark and Deadly: 50 Years of Film Noir documentary (52min), another extensive gallery, an illustrated booklet and English subs. The remaining extra is the March 27, 1944, Lux Radio Theater adaptation with returning stars Ella Raines and Alan Curtis (60min). However, it’s strange Arrow didn’t include the trailer and only other radio adaptation, from Screen Guild Theater, September 11, 1944 (30min). Never mind: they’re all freely available anyway:

Lastly comes the depressingly predictable caveat: beware the bootlegs. Home-made DVD-Rs are all over eBay, iOffer and the like but the main offenders are discs from Italy (Golem Video, Sinister Film) and Spain (Suevia/Resen).